Trump and the Rebirth of Press Freedom

Journalists should not fear being on the wrong side of power. On the contrary, that is exactly where they belong. 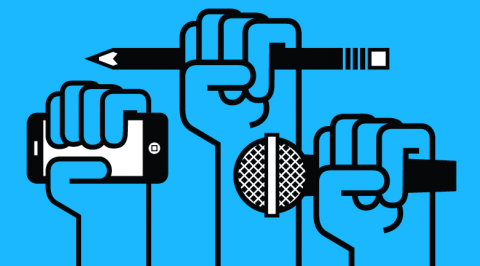 NEW YORK – US President Donald Trump’s administration has shocked the mainstream press by bullying news outlets and unabashedly trafficking in “alternative facts” (also known as lies). But Trump’s challenge to the media status quo may not be an entirely bad thing: journalists now have an opportunity to root out the bad habits associated with cozying up to those in power.
Trump’s chief strategist, Stephen Bannon, drew gasps recently when he told the New York Times that the news media represent “the opposition party.” Bannon may have wanted to disorient his interlocutors, but he also inadvertently reminded them of the adversarial role they are meant to play. In a healthy democracy, the press helps citizens hold the government accountable, by vigorously interrogating official policies and behavior.
Unfortunately, it has been decades since America had that kind of news media. Instead, the press has allowed multiple presidential administrations to spoon-feed it information. News organizations in the United States have prioritized access to the corridors of power above all else, even when access is conditioned on avoiding uncomfortable questions or accepting evasive answers.
When “access journalism” leads senior editorial decision-makers to identify with political elites, explaining the government’s thinking to the public becomes their primary purpose. Combine that with cuts to news budgets, and political coverage becomes a mere endless cycle of sound bites from politicians and their surrogates – not unlike a dedicated sports channel covering a football season.
Even the more meticulously factual media outlets have, in recent decades, confined their coverage to a narrow range of topics that tend to confirm the political establishment’s self-serving narratives. Because they had exposed themselves only to elite perspectives, members of the mainstream media were initially blindsided by the fact that many Americans who had previously voted for Barack Obama in 2008 and 2012 either stayed home or voted for Trump in 2016.
But no calamity better captures the dangers of a press corps too beholden to power than the invasion of Iraq, a cataclysmic blunder whose ghastly knock-on effects afflict the Middle East, as well as Europe, to this day. In the lead-up to the invasion, George W. Bush’s administration assiduously courted journalists at mainstream liberal and conservative news outlets, who then helped it win public support by disseminating what turned out to be false claims about weapons of mass destruction (WMD).
In the US, the only mainstream media organization that ran consistently skeptical articles about the case for war was the Knight Ridder group (which has since been acquired by McClatchy). As reporters Warren Strobel and Jonathan Landay later explained, their middle-tier news service was not granted top-level access, so they had to rely on sources from inside the intelligence community, who forthrightly pointed out the flaws in the Bush administration’s claims. Journalistic truth telling thrives when there is no need to nurture access.
The Trump administration is already shutting the door on some media mainstays, with CNN the most prominent example. Trump’s media handlers may be hoping that they can demand compliance as a condition for renewing access. But this should liberate shunned media outlets. Having lost direct access to senior officials, they can now focus strictly on holding the administration to account.
To take this high road, media outlets will need to rethink longstanding editorial models. Reuters Editor-in-Chief Steve Adler, for his part, recently called on his peers to cover the Trump administration no differently than they would an authoritarian government abroad. “Give up on hand-outs and worry less about official access,” Adler wrote in a letter to the Reuters staff. “They were never all that valuable anyway. Our coverage of Iran has been outstanding, and we have virtually no official access. What we have are sources.”
Trump hopes to control the national conversation; and he need not worry that his mendacity will alienate his supporters, because they already believe that the “liberal” media detest them and the president they elected. But, while we should commend the New York Times for describing the administration’s palpably false statements as lies, we should also draw attention to important unlearned lessons of the Times’ abysmal record in the run-up to the Iraq war.
Taking the Bush administration at its word about WMD, for which the Times later apologized, was only part of the media’s failure in that debacle. News outlets not only allowed the administration to marshal questionable facts to justify the invasion; they also permitted officials to attach undue significance to those facts, with no questions asked.
It is worth remembering that Germany and France concurred with the Bush administration’s factual claims about Iraqi weapons, but vigorously opposed the invasion, because they believed that the consequences would pose a larger threat than Saddam Hussein ever could. They have since been vindicated. Even if US forces had found stockpiles of chemical and biological weapons in Iraq, history would not judge the war any less harshly.
Bannon’s “opposition” remark should serve as a reminder of this recent history. To defend American democracy against the threat of authoritarian populism, media outlets must not stop at vigorously challenging Trump’s “alternative facts.” They must tell a different story, based on observations, investigations, and critical assessments of claims made by both Republicans and Democrats in power.
The real story, as 2016 showed, is often playing out in places to which the media is paying no attention. Adler instructed his staff to, “Get out into the country and learn more about how people live, what they think, what helps and hurts them, and how the government and its actions appear to them, not to us.” Journalists should not fear being on the wrong side of power. On the contrary, that is exactly where they belong.
Tony Karon is an instructor in the New School’s Graduate Program in International Affairs. He was previously a Senior Editor at TIME magazine and Editorial Director of Al Jazeera America’s digital news operation.
Subscribe to Portside