Facing the Wind: The Life of Wobbly Organizer Sam Dolgoff

According to Anatole, Sam knew everyone in the Left world for decades. One memorable anecdote about his father was when they went to see the movie Reds together. Sam couldn’t keep quiet during the film, as he maintained a running commentary on nearly every major character, whom he had known personally. 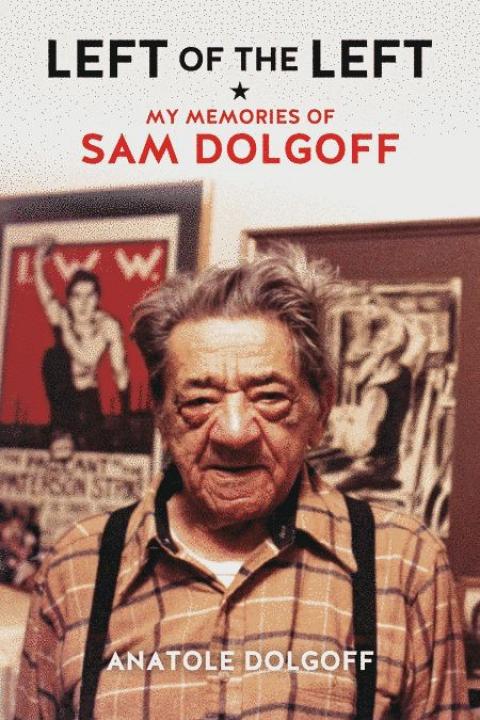 Anatole Dolgoff’s middle name is Durruti, after the famous Spanish anarchist Buenaventura Durruti, and this tells you a lot about his family. Early in his book about his father Sam Dolgoff, Anatole, a professor at the Pratt Institute, describes how his father discovered anarchism in the early 1920’s. Sam was briefly a member of the Socialist Party in New York City. However, his anti-authoritarianism, criticisms of party doctrine, and his scorn for what he considered opportunists and careerists earned him a trial for disruption and insubordination, and ultimately, expulsion.

Sam recalled that after the hearing “one of the judges came up to [him] and said ‘You know, you are not too bad. In fact you put up a pretty good defense, as far as things go, although your case is hopeless. I am going to give you a tip. You are not a socialist. You are an anarchist. You belong with the crazies.’” Sam then asks, “What is their address?” Thus, Sam found his lifelong home in the anarchist movement.

And what a journey it was. This fascinating memoir, Left of the Left, My Memories of Sam Dolgoff, is part biography and family history, and part commentary on many decades of twentieth century radical activists and groups, seen primarily through the eyes of Sam. At a time when many people think of anarchists as the hooded “black bloc” kids breaking windows at protests, Dolgoff reminds us of his father’s kind of anarchism. It centers on people’s ability to take care of themselves through mutual aid, and run society through cooperative organizations, with opposition to hierarchy, state power, capitalism, and authoritarian communism.

Sam helped draft the “What We Stand For” statement of the Libertarian League in the 1950’s. This is when Libertarian referred to left-Libertarian anti-capitalist, anarchism, not the right-wing, free-market capitalism that it’s associated with today in the US It stated:

We advocate a world-wide society of communities and councils based on cooperation and free agreement from the bottom (federalism) instead of coercion and domination from the top (centralism). Regimentation of people must be replaced by regulation of things. Freedom without socialism is chaotic, but socialism without freedom is despotic. Libertarianism is free socialism.

Sam was born into a Jewish family in 1902 in Belarus. He came to New York City a few years later, and with little formal education, started working at age eight, eventually working as a painter. He quickly found himself immersed in local radical politics and after his brief fling with the Socialists, he joined the group associated with the anarchist periodical Road to Freedom. This was the first of many anarchist groups and publications Sam associated with, which later included Vanguard and the Libertarian League. In the 1920’s, he became interested in anarcho-syndicalism and soon joined the Industrial Workers of the World (IWW), where he was a member until his death in 1990. Along the way, he developed friendships with many notable radicals; among his closest friends were Carlo Tresca, the renowned Italian anarchist, and Ben Fletcher, the legendary waterfront organizer. Anatole’s mother, Esther, was also active in anarchist circles, which is how she met Sam.

According to Anatole, Sam knew everyone in the Left world for decades. One memorable anecdote about his father was when they went to see the movie Reds together. Sam couldn’t keep quiet during the film, as he maintained a running commentary on nearly every major character, whom he had known personally.

Gruff and vinegary, argumentative and often uncompromising, Sam had a disheveled look, someone who “combed his hair with an eggbeater”, and spoke “half New York, half Joe Hill.” He was a gutsy Wobbly activist and organizer for decades, involved in many campaigns and projects, speaking on street corners, meeting with workers who were organizing, confronting fascists in the 1930’s, supporting Spanish anarchists imprisoned by Franco, arguing with Marxists, and attending endless meetings and discussions along the way. Self-educated in the movement, Sam went on to make significant contributions to the anarchist literature over the years, including books on Bakunin and the Spanish Revolution. All this while working for over fifty years at a physically demanding job painting apartments and offices.

Anatole’s biography of his father brings alive the day-to-day life in radical politics — the excitement and the slog, the comradeship and the alienation, the arguments and the splits. The book also tells the stories of the numerous colorful activists and intellectuals who moved in Sam’s circles, most never famous or long forgotten. Anatole gives life to these characters and their immigrant neighborhoods of the time. Readers can easily picture the long gone IWW “Five-Ten Hall” where Sam would pass the time with merchant seamen friends near the waterfront.

Of course Sam wasn’t perfect. Anatole makes clear the effect Sam’s activism had on the family, where movement work often took priority. He would disappear, sometimes for days, on organizing or speaking trips. His decades of heavy drinking also took a toll.

Sam and others did the dangerous and unglamorous work of keeping radical ideas alive during the tough times of the McCarthy era. Thus he acted as a crucial bridge between the 1930’s and the 1960’s when large numbers of people were once again ready to engage with left politics. Anatole recounts when Sam arranged a meeting in the 1960’s between the old-school Italian Anarchists from the L’Adunata group and the younger folks from the Up Against the Wall Motherfuckers collective who needed funds and legal assistance. The Motherfuckers embraced a counter-cultural, lifestyle anarchism that was alien to the older, more conservative Italians, leading to the inevitable culture clash.

A final anecdote in the book seems to be classic Sam. In the mid 1980’s at an Irish bar in the Meatpacking District, Sam meets a delegation of striking Welsh miners from the famous British coal strike of the time. As Anatole describes it, “What was there to say? The strike was lost. Words were insufficient. A long pause as Sam stood before them. If there was nothing to say, why say it? Without a plan, in the moment, Sam raised his right arm high in a fist. And then he sang-croaked in his gravel baritone the old English strike song he was sure the men knew: ‘Hold the fort for we are coming, Union men be strong…’ It was a Wobbly favorite. The room exploded!” Everyone joins in and after the room goes quiet, Sam says that “no strike is really lost. The men had stood up for their rights, their dignity, and that is something never lost.”

The same can be said of radical organizing. It may seem that there are few wins among a lifetime of difficult losses, but the fight for a better world and to keep these important ideas alive is essential. The struggle itself matters. In his last days, Sam told Anatole, “You know, the hardest thing in life is to stand facing the wind. That’s what we tried to do, that’s what we did.”

Sam died over twenty-five years ago and had obituaries in the Village Voice and even the New York Times. Anatole writes that in recent years he grew increasingly compelled to tell this story. I’m so glad he did and I had the chance to meet him recently and hear him talk about his father. This book is a fascinating tour through the life and times of a lifelong Wobbly and working class intellectual. It is also a touching personal memoir about growing up in a radical family. It’s a valuable addition to anarchist and left history and Sam will not be forgotten.