“Saturday Night Live” took a departure with its cold open this week, taking us out of the Trump White House — and into the universe of the 1994 movie “Forrest Gump.” Instead of Tom Hanks, it was Attorney General Jeff Sessions (Kate McKinnon) at the bus stop, eating chocolates and confiding in strangers about a rather momentous week. 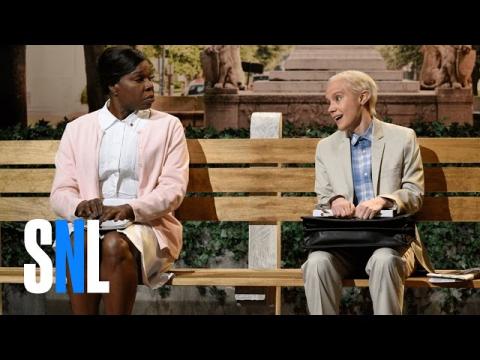 ,
“Saturday Night Live” took a departure with its cold open this week, taking us out of the Trump White House — and into the universe of the 1994 movie “Forrest Gump.” Instead of Tom Hanks, it was Attorney General Jeff Sessions (Kate McKinnon) at the bus stop, eating chocolates and confiding in strangers about a rather momentous week.
“I’m the attorney general of the whole United States,” Sessions said, introducing himself to a woman (Leslie Jones) in Gump’s pronounced Southern drawl. “He shook my hand like this,” Sessions added, before imitating President Trump’s forceful (and oft-discussed) handshake.
“Being in the government is so fun,” Sessions continued, eventually pulling out a photo of his “best good friend Kellyanne.” The photo, of course, was the infamous image of White House adviser Kellyanne Conway kneeling on a couch in the Oval Office during Trump’s meeting this week with representatives from historically black colleges and universities. “She ain’t got no legs.”
The sketch managed to reference several of the week’s most prominent headlines, while also closely mirroring the dialogue from Robert Zemeckis’s Oscar-winning film. In “Forrest Gump,” the protagonist noted that his friend and commanding Army officer, Lieutenant Dan, had no legs — the result of an injury suffered during the Vietnam War.
The sketch also riffed on Gump’s most famous line, with Sessions noting: “I always say life is like a box of chocolates. Sure are a lot of brown ones in there.”
The bus came, and another stranger sat next to Sessions on the bench. It was time to address the controversy surrounding revelations by The Washington Post that the attorney general had spoken twice last year with Russia’s ambassador to the United States but neglected to disclose those discussions during his confirmation hearing.
“I was on the cover of the New York Times. You wanna see?” Sessions asked.
“It says you might have committed perjury,” the stranger said.
“Yeah, I had a bad week. Started out real good,” Sessions said recalling Trump’s address to a joint session of Congress. He continued:
“The president made a great speech. Folks were thrilled on account of it was real words in a row for a whole hour. We was all as happy as a monkey with a peanut machine. Then I want to bed. I got 800 messages and phone alerts, saying I was a sneaky little liar. I didn’t know what to do. So my lawyer said: Run, Jeffrey, run! I started running and running. I ended all the way sitting at this bus stop with you.”
After telling yet another stranger that he had to prove that he “had no ties to the Russians whatsoever,” Russian President Vladimir Putin (a once-again shirtless Beck Bennett) popped up to say, simply, “This meeting never happened.”
A familiar face followed. It was SNL host Octavia Spencer, reprising her Oscar-winning role as Minny Jackson in “The Help.” After asking if Sessions was indeed the one whom Coretta Scott King wrote a letter about back in 1986, she introduced herself. “I’m Minny. You don’t know me. I’m from a different movie.” She then gave him a pie that was immediately familiar to anyone who has seen the 2011 film, adapted from the novel by Kathryn Stockett.
It’s presented as a chocolate pie but contains a special ingredient, adding new meaning to the phrase “You never know what you’re gonna get.”
Subscribe to Portside