Right-Wing Billionaires Have a Project Going to Rewrite Our Constitution

Their goal appears to be to put into the Constitution specific prohibitions against any programs (from Social Security to Medicare to food stamps) that they've always viewed as "unconstitutional socialism," and to permanently enshrine in the Constitution the "right" of corporations and billionaires to own politicians and spend unlimited monies to influence elections and ballot measures. I 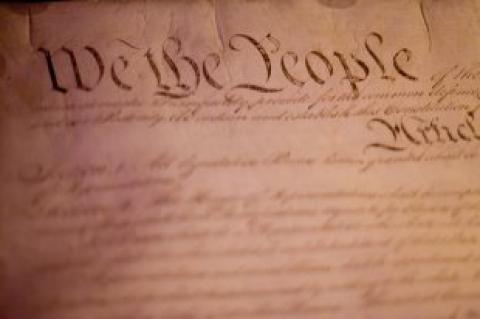 Imagine if the U.S. Constitution barred the EPA and Department of Education from existing. All union protections are dead, there are no more federal workplace safety standards, and even child-labor laws are struck down, along with a national minimum wage.

Imagine that the Constitution makes it illegal for the federal government to protect you from big polluters, big banks and even big food and pharma—all are free to rip you off or poison you all they want, and your only remedy is in state courts and legislatures, because the Constitution prevents Congress from doing anything about any of it. The federal government can't even enforce voting or civil rights laws.

A few years ago, it would have been a thought experiment; now it's nearly reality. Billionaires and the groups they fund are working to rewrite our Constitution to provide corprations and the rich with more and more protections and benefits, and chop away at anything smelling of “socialism” like Social Security or child labor laws.

The fact is that they're just a few states away from meeting their goal, and have already held dress rehearsals in Washington D.C.—with representatives from all 50 states—for a Constitional Convention that would change America forever.

The Constitution (arguably) provides for three ways to change or amend itself. The first is that Congress can propose a constitutional amendment, pass it with a supermajority in both houses, and have three-quarters of the states ratify it. This is the way it's been done for every one of the existing 27 amendments.

The second strategy is done by using Article 5 of the Constitution and driving the process up from the states. The easiest way to do this is for three-quarters of the states to legislatively approve (with majority votes in each state) an amendment, in which case Congress is unnecessary and upon ratification by the 38th state, it becomes a permanent amendment to the Constitution.

While this strategy has never been used, it's why many of the good government groups like Move To Amend and Public Citizen are pushing for a “Corporations are not people, and money is not speech” amendment.

The third—and incredibly dangerous—strategy to amend the Constitution is to simply call a “Convention of the States,” again using Article 5, and open the entire document itself up to rewriting and tinkering.

This third strategy is the one being used right now, as you're reading these words, in a very well-funded effort by right-wing oligarchs. If they can pull it off in the states (where it's cheaper to buy politicians), then Congress, the president and even the courts would have no say over it.

Their goal appears to be to put into the Constitution specific prohibitions against any programs (from Social Security to Medicare to food stamps) that they've always viewed as “unconstitutional socialism,” and to permanently enshrine in the Constitution the “right” of corporations and billionaires to own politicians and spend unlimited monies to influence elections and ballot measures. It would effectively turn America into a feudal state owned by the people FDR called the "economic royalists."

The group leading this charge is called Citizens for Self-Governance, which SourceWatch.org says, "is a right-wing political organization tied to Eric O'Keefe that is campaigning for an Article V convention to amend the U.S. Constitution. Through its 'Convention of States' project, CSG promotes an effort to amend the U.S. Constitution pursuant to Article V, which provides that thirty-four states (two-thirds) can trigger a convention to propose an amendment, which must then be ratified by 38 states (three-fourths)."

They add, “CSG director Eric O'Keefe has deep ties to Charles and David Koch and has been a founder and funder of numerous right-wing groups including Wisconsin Club for Growth,” and the CSG, “through its Convention of States project, is pushing for a constitutional convention in order to severely restrict federal power, for example by redefining the Commerce Clause to prohibit Congress from enacting child labor or anti-discrimination laws, or by adding a balanced budget requirement.”

And they're actually doing it. As Wikipedia notes,

“In December 2013, nearly 100 legislators from 32 states met at Mount Vernon to talk about how to call a convention of states. … In February 2014, U.S. Senator Tom Coburn announced that after his retirement from Congress, he would focus on promoting the Convention of States to state legislatures.

“In December 2015, Marco Rubio endorsed CSG's efforts to a call an Article V Convention. In January 2016, Texas Governor Greg Abbott called for a Convention of States to restrict the power of the federal government.

"As of 2016, CSG's application for a Convention of States has been passed in eight states: Georgia, Florida, Alabama, Alaska, Tennessee, Indiana, Oklahoma, and Louisiana.”

Now that they have mobilized thousands of enthusiastic billionaire-supporting conservatives across the nation, with help from one of America's most widely heard right-wing talk-radio hosts, Wikipedia notes:

“The simulated convention passed amendments relating to six topics, including requiring the states to approve any increase in the national debt, imposing term limits, limiting the Commerce Clause to its original meaning [ending minimum wage, federal right-to-unionize, and child-labor laws], limiting the power of federal regulations [aka "consumer protections], requiring a supermajority to impose federal taxes and repealing the 16th Amendment [which legalized federal income taxes], and giving the states the power to abrogate any federal law, regulation, or executive order.”

We've discussed this movie before, although we've never seen it so close to us.

On April 9, 1944, at the height of the war against fascist Germany and Japan, the New York Times published an op-ed by Vice President Henry Wallace discussing explicitly the issue of very wealthy people setting out to take over our government.

Wallace spoke directly to the danger of multimillionaire and corporate power, defining right-wing industrialists as people “who in case of conflict put money and power ahead of human beings.” He added that “in their search for money and power [they] are ruthless and deceitful. ... They... follow power and the dollar wherever they may lead."

In his strongest indictment of that day's equivalent of today's billionaire class, Wallace wrote, "They claim to be super-patriots, but they would destroy every liberty guaranteed by the Constitution. They demand free enterprise, but are the spokesmen for monopoly and vested interest. Their final objective toward which all their deceit is directed is to capture political power so that, using the power of the state and the power of the market simultaneously, they may keep the common man in eternal subjection."

As Wallace's president, Franklin D. Roosevelt said when accepting his party's re-nomination in 1936 in Philadelphia, "out of this modern civilization, economic royalists [have] carved new dynasties.... It was natural and perhaps human that the privileged princes of these new economic dynasties, thirsting for power, reached out for control over government itself. They created a new despotism and wrapped it in the robes of legal sanction."

We stand at the same crossroads Roosevelt and Wallace confronted during the Great Depression and World War II, only this time the Supreme Court (in 1976 with Buckley, 1978 in Bellotti and in 2010 with Citizens United) has given American billionaires the power to spend virtually unlimited amounts of money to own politicians and demand behavior from them so outrageous that they'd even lie on live TV and deny science itself.

President Roosevelt and Vice President Wallace's warnings have come full circle. It's critical that we call out these economic royalists for what they're doing, and not let them and their minions rewrite our Constitution.

is an author and nationally syndicated daily talk show host. His newest book is ""

Thom HartmannThe Crash of 2016: The Plot to Destroy America — and What We Can Do to Stop It.