The draft shifts Chile away from the existing Pinochet-era document, enshrining cultural rights and laying out a path of autonomy for Indigenous peoples 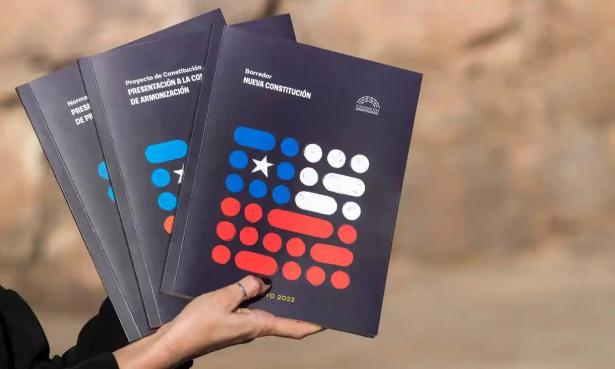 Chile’s new draft constitution. Chileans must vote to approve or reject it in a plebiscite on 4 September. Polling suggests a majority plan to reject the draft. , Photograph: Cristian Rudolffi/AFP/Getty Images

The process of drafting Chile’s new constitution has come to an abrupt, jubilant end as the final votes were held quickly by the 154-member, gender-equal constitutional convention.

Huddling between the colonnades at the former congress building in Santiago, which has played host to Chile’s constitutional process, the delegates hugged and cheered as the draft was finalised.

“It was fitting that we finished up like this,” said Tiare Aguilera, 40, a delegate representing Chile’s Polynesian territory Rapa Nui, or Easter Island, on the steps outside the building.

“This is how it has been all along – tight deadlines and a lot of uncertainty as we tried to address our country’s turbulent political process.”

The draft constitution will be formally presented at a 4 July ceremony, before all Chileans aged 18 or older must vote to either approve of reject it in a nationwide plebiscite on 4 September.

The campaigns run by both camps are expected to be hard-fought and divisive.

But after a year of tense negotiations and occasionally bitter infighting, the 388-article draft shifts Chile’s development decisively away from the neoliberal consensus of the current constitution – drafted without democratic input by a team of dictator General Augusto Pinochet’s confidants.

The new draft, by contrast, broadly makes the state responsible for the provision of services, enshrines a host of social and cultural rights, and guarantees gender parity across government and public enterprises.

It also lays out a path for autonomy for Chile’s Indigenous peoples, who were guaranteed representation in the constitutional convention.

“[The draft] does two things in particular,” said Tomás Laibe, a 31-year-old representing Aysén, a swathe of Chilean Patagonia in the far south of the country.

“It rethinks the state’s relationship with social rights, and it enshrines representative democracy to open the door to other forms of participation.”

Chile’s journey towards replacing its constitution began long ago, but gathered irresistible momentum in late 2019 when millions of people poured on to the streets to decry their dissatisfaction with their lives and the political forces governing them.

The vast social movement precipitated a peace accord, of which current president Gabriel Boric was a signatory, paving the way for a plebiscite to be held a year later on 25 October 2020.

Almost 80% of Chileans voted to draft a new constitution, and the largely leftwing convention was inaugurated in July last year.

This May, the convention drew up a draft with nearly 500 articles which have now been streamlined and condensed.

But with tensions running high, the ceremony was briefly suspended by a vicious street battle where protestors hurled hunks of concrete while police fired back with water cannons and teargas.

Since then, a vociferous campaign to undermine the process has simmered in the background, and although polling currently suggests that a majority of Chileans plan to reject the draft, many delegates remain proud of their work.

“The process has been full of hope from the beginning,” said Félix Galleguillos, 36, who sat in the seat reserved for the Lickanatay Indigenous community from the Atacama desert.

“There’s never been a constitutional process like this before and there never will be one again. It’s unique.”