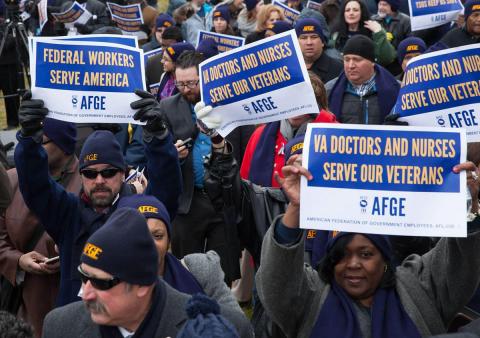 , AFGE/Facebook
Republicans are divided on the best way to deprive millions of their health-care coverage, but they are a cohesive pack when it comes to ganging up on the federal workforce.
In separate actions over a few days, House and Senate Republicans moved to undercut worker due process rights, weaken labor organizations and protect companies with workplace violations affecting contractor employees.
The GOP functioned like a well-oiled fighting machine, hitting the workforce on three fronts simultaneously to advance the Trump administration’s top agenda item: “deconstruction of the administrative state.”
Once again, Department of Veterans Affairs (VA) employees were the target of an assault on civil service protections. The House Veterans Affairs Committee approved legislation Wednesday that would chop up those safeguards to facilitate firing feds faster.
The VA Accountability First Act would do that by lowering the department’s burden of proof in certain cases and by sharply reducing the amount of time allowed for notification and response to terminations, suspensions and demotions. The 30-day notice and seven-day reply periods that are generally the rule would be cut to a combined 10 days under the legislation. That’s very little time given the legal work often required.
The bill also would force the Merit Systems Protection Board (MSPB), a quasi-judicial office that hears employee appeals, to act more quickly, although without additional resources to do so. The requirement that administrative judges issue decisions within 45 days would be a significant reduction from the four months that is the current MSPB goal. Without more staff, the board would have to let VA cases jump the line, meaning others would be delayed, extending the federal disciplinary process.
Before the committee voted, Chairman Phil Roe (R-Tenn.), the bill’s sponsor, noted that several versions of the legislation were previously approved “and yet the challenge remains … to provide Secretary Shulkin with the tools he needs to swiftly and effectively discipline employees.”
Specifically citing the American Federation of Government Employees (AFGE), which represents VA staff members, Roe added that he wants to “eliminate the ability for unions to use existing grievance procedures to dispute major adverse actions,” which he said can take almost 350 days.
The disciplinary process certainly can be slow, sometimes too slow, as can democracy. But due process, a fundamental part of the democratic process, is designed to protect taxpayers, as well as employees, from a politicized government that plays favorites with services to the public and the people who perform them. Improvements to the system should reflect that, provide adequate employee response time and the resources adjudicating agencies need to improve efficiency while seeking justice.
The GOP targeting of federal employee unions was more overt in the House Oversight and Government Reform Committee. It approved legislation Friday that would sharply cut “official time.” Rep. Jody Hice (R-Ga.), the bill’s sponsor, misrepresented the practice by saying that “paying federal employees to do union work interferes with providing the services that taxpayers deserve.”
Actually, official time covers a much broader range of activities than what “union work” implies. In fact, internal union business is not permitted. Using official time, union representatives on government pay work on behalf of a bargaining unit’s entire staff, including non-union employees the labor organizations are required to represent. Meetings with management on subjects such as increasing productivity, workplace safety and collective bargaining are covered by official time, but union elections, dues collection and membership solicitation are not.
The bill would attack the practice by prohibiting union leaders on at least 80 percent official time from counting that toward their pensions, a provision Rep. Elijah E. Cummings (Md.), the panel’s ranking Democrat, called “incredibly unfair and punitive.” Bonuses also would be blocked for those union reps.
“This is this most blatant attack on federal union representatives that I have seen throughout all my years of representing federal workers,” AFGE President J. David Cox Sr. said.
If this legislation passes the full House, Democrats and union supporters hope it would fail in the Senate, where a supermajority could be needed for passage.
The Daily 202 newsletter A must-read morning briefing for decision-makers. Sign up But before progressives count too heavily on the Senate’s willingness to protect workers, they should consider its vote to kill regulations stemming from an Obama administration executive order to promote “fair pay and safe workplaces,” as the directive was named.
The regulations, which had been blocked by a court order and voted down in the House, would require agencies to consider a company’s record of workplace violations when selecting firms for Uncle Sam’s business. Republicans and trade associations call that “blacklisting” even though nothing in the order or the regulations prohibited the firms from getting government work.
“This is the opening salvo of the Republicans’ war on workers,” Deborah Berkowitz, a senior policy adviser at the Occupational Safety and Health Administration during the Obama administration, told my colleague Kimberly Kindy.
It certainly wasn’t the last — not even for last week.