Florida, nicknamed the Gunshine State, became a symbol of strong self-defense laws after George Zimmerman shot and killed Trayvon Martin, an unarmed black teenager, in 2012 and was later acquitted when a jury found he was justified in pulling the trigger. 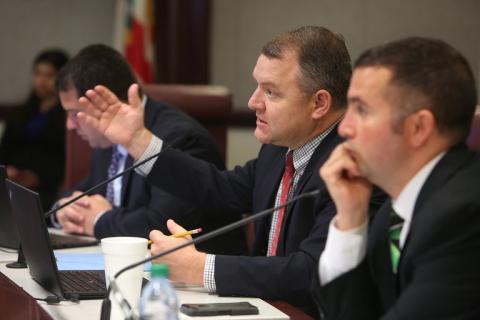 State Senator Rob Bradley, left, wrote the Stand Your Ground measure, which would make it easier for defendants in Florida to claim self-defense,Scott Keeler/The Tampa Bay Times, via Associated Press

MIAMI — Florida, which spearheaded the country’s use of the Stand Your Ground defense, is poised to significantly alter its self-defense laws, making it easier for defendants to use them.

The Florida Legislature is on the verge of passing legislation that would bolster self-defense laws and shift the burden to prosecutors during immunity hearings to show that such laws should not apply.

The Senate on Wednesday passed a revised Stand Your Ground bill by a vote of 23 to 15, paving the way for the House to take up the bill in the coming weeks. Gov. Rick Scott, a strong proponent of gun rights, is widely expected to sign the final measure.

“I think of all the people who will be saved because we did this right and put the burden of proof where it belongs,” State Senator Dennis Baxley, one of the authors of the original 2005 Stand Your Ground bill, said during a passionate floor debate that touched on the importance of self-defense and the reality of race in America. “I’m sorry if that burden seems too heavy. That’s what we do in America. You are innocent until proven guilty.”

Florida, nicknamed the Gunshine State, became a symbol of strong self-defense laws after George Zimmerman shot and killed Trayvon Martin, an unarmed black teenager, in 2012 and was later acquitted when a jury found he was justified in pulling the trigger. (While Mr. Zimmerman argued self-defense, he did not offer a Stand Your Ground case.)

The furor surrounding the shooting brought renewed attention to Florida’s far-reaching self-defense laws and cast a light on several notorious Stand Your Ground claims. In one 2012 case, a Miami man spotted a thief stealing his car radio. After the thief tried to strike him with a bag full of stereos, the man chased him down the street and stabbed him to death. He hid the knife and later sold a few stereos from the bag. The defendant’s case was dismissed by a judge after a Stand Your Ground hearing.

If the new measure is enacted, the state would again be at the forefront of expanding self-defense laws. Florida would become the first state to apply a tougher standard to the law, putting the onus on prosecutors at the immunity hearing. The burden of proof would be shifted to prosecutors, and defendants would no longer have to present evidence, typically by taking the stand, to prove their claim of self-defense.

Instead, prosecutors would have to prove beyond a reasonable doubt — the highest legal standard — that the use of force was not justified.

The Stand Your Ground provision allows people to use deadly force, without first attempting to retreat from a dangerous situation, if they “reasonably believe” their lives are threatened. Supporters of the revised bill said they did not want people who act in self-defense to face unfair hurdles in getting the charges dismissed before a trial.

Senate Democrats spoke sharply against the bill, calling it an opportunity for wrongdoers to take advantage of self-defense laws.

“We live in a society where many of us are guilty until proven innocent every day. And, in this instance,” he said incredulously, “we want to take the burden of proof and shift it to the prosecution.”

Prosecutors have fought the measure, saying it cuts against the grain. Typically, when defendants admit killing or wounding someone but seek the dismissal of charges at a hearing — arguing entrapment, for example — it is up to them to present evidence and persuade the court, not the other way around.

The new standard would require prosecutors to essentially put on a nonjury mini-trial, requiring victims and witnesses to testify twice, prosecutors said. And with defendants no longer required to offer evidence — which usually means taking the stand — there will be little, if any downside, for them to claim Stand Your Ground.

“If all they have to do is file a motion and say ‘I claim Stand Your Ground,’ we are going to have to go through an entire trial because we don’t know what specific facts they are using or claiming,” said Glenn Hess, the president of the Florida Prosecuting Attorneys Association. “We have to present our whole case. There is something wrong with that.”

This would create a logjam of cases, prosecutors said, because under Florida law anyone with a self-defense claim — not just those involving a death — can ask for immunity hearings. That includes people charged with misdemeanors, battery, assault and domestic violence. This would cost the courts more money and delay trials, one reason defense lawyers like the bill.

“There would be zero risk now for a defendant to ask for a hearing,” said Phil Archer, the state attorney for the 18th Circuit Court in Florida, which covers Brevard and Seminole Counties.

Right now, Florida, along with most of the 22 states with similar self-defense laws, places a lower burden of proof on the defendant at the pretrial hearing — a preponderance of the evidence, not beyond a reasonable doubt.

Defendants are free to claim self-defense before a judge and request immunity from criminal and civil prosecution. But they must present evidence or take the stand to support the self-defense claim, which can be a big deterrent for most defendants.

If immunity is granted, the charges are dismissed. If immunity is denied, the case moves to trial, where the self-defense claim can still be presented before a jury. Last week, Curtis J. Reeves Jr., the so-called popcorn shooter who shot and killed a man in a Tampa movie theater, lost his immunity hearing after invoking Stand Your Ground. He will now go to trial.

Two other states — Kansas and Kentucky — also place the burden of proof on the government during Stand Your Ground hearings. But the standard of proof is considerably lower. Prosecutors must simply establish probable cause that force was not legally justified.

Senator Rob Bradley, who sponsored the bill, argued that people who act in self-defense should have their charged dismissed as early and easily as possible. Someone’s freedom is at stake, so “the burden should be high on the government.”

But the nuts-and-bolts of how the Stand Your Ground hearing would play out in courtrooms would change considerably.

Mr. Archer said only four Stand Your Ground hearings were held in his jurisdiction in 2016, an area with a million people. He predicted that next year the number would be 4,000 if the law changes.

State attorneys said that they were confident they would win most of the hearings, but that succeeding at trial could become more difficult. Delays seldom work in the prosecution’s favor because memories fade and witnesses disappear. Some victims, particularly those in domestic violence cases, are often reluctant to testify twice, an additional complication.

But, more important, they argue that if someone wants immunity from killing or hurting a person they need to make a case for it.

“If you want complete immunity, where you never ever face a jury of your peers, then take the stand and tell us why,” Mr. Archer said.