New study shows police homicides have significantly decreased in most cities where Black Lives Matter protests occurred. The #BLM movement can take some satisfaction in its possible impact on police homicides. 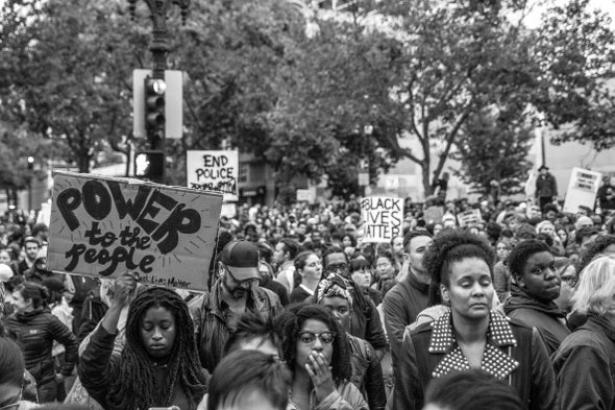 Since Black Lives Matter protests gained national prominence following the 2014 police killing of Michael Brown in Ferguson, Mo., the movement has spread to hundreds of cities and towns across the U.S. Now a new study shows police homicides have significantly decreased in most cities where such protests occurred.

Black Lives Matter (BLM) began when Oakland, Calif.–based activist Alicia Garza posted a message of protest on Facebook after George Zimmerman, a neighborhood-watch volunteer who followed and fatally shot 17-year-old Trayvon Martin in Sanford, Fla., was acquitted of murder in 2013. Patrisse Cullors, another Oakland community organizer, began sharing Garza’s message on social media, along with the hashtag #blacklivesmatter. The slogan soon spread, building into a largely leaderless movement against structural racism and police violence. Last year, spurred by a Minneapolis police officer’s killing of George Floyd, millions of people demonstrated in hundreds of BLM protests throughout the U.S.

“Black Lives Matter represents a trend that goes beyond the decentralization that existed within the Civil Rights Movement,” says Aldon Morris, a sociologist at Northwestern University, who was not involved in the new study. “The question becomes, ‘Are Black Lives Matter protests having any real effect in terms of generating change?’ The data show very clearly that where you had Black Lives Matter protests, killing of people by the police decreased. It’s inescapable from this study that protest matters—that it can generate change.”

The study, posted in February as an online preprint item on the Social Science Research Network, is the first of its kind to measure a possible correlation between BLM and police homicide numbers. It found that municipalities where BLM protests have been held experienced as much as a 20 percent decrease in killings by police, resulting in an estimated 300 fewer deaths nationwide in 2014–2019. The occurrence of local protests increased the likelihood of police departments adopting body-worn cameras and community-policing initiatives, the study also found. Many cities with larger and more frequent BLM protests experienced greater declines in police homicides.

The study involved a quantitative research technique called “difference in differences,” which mimics a controlled experiment with observational data. Difference-in-differences studies use variation in the timing and location of a “treatment variable” (such as BLM protests or police killings) to sort data into artificial control groups and treatment groups; researchers can then compare an event’s apparent effects in different settings or time periods. The new study compared police killings in cities that experienced BLM protests with those that did not.

“It’s really difficult to measure Black Lives Matter protests and lethal use of force by the police,” notes the study’s author, Travis Campbell, an economist at the University of Massachusetts Amherst. This is mainly because comprehensive data on police killings are lacking: the federal government does not track police officers’ lethal use of force, and media and grassroots organizations attempt to fill the void via Freedom of Information Act requests and crowdsourcing efforts.

Aislinn Pulley is a co-founder of Black Lives Matter Chicago, which has compiled a list of everyone who died at the hands of the Chicago Police Department since 2011. “It’s extraordinarily important to have concrete data of the numbers of incidents that involve police violence of all stripes, from killings to torture to being held incommunicado in police stations to people who died in custody,” she says. “We didn’t have access to that data prior to the movement—and we still have only partial access.”

Because the national picture of police homicides remains incomplete, “the big issue is that you may undercount the true number of fatal interactions” with police—especially in lower-population areas where media coverage may be lacking—Campbell says. To address this, he gave greater weight to results from larger cities, where he says news reports of police killings and protests likely had more accurate estimates of both. He analyzed the relationship between protests and police homicides using several different techniques and consistently found similar results.

Joscha Legewie, a Harvard University sociologist who was not involved in the study, says the difference-in-differences design is “very well suited” for the kind of data Campbell was analyzing. “It’s extremely important [to have] a better understanding of the processes behind this,” he says. “Are these reductions driven by reforms initiated in response to protests? That’s a key area we need to understand to draw more conclusions about policy implications.” Legewie hesitates to accept the precise estimate of 300 fewer killings but says the study still indicates a substantial—and important—overall trend and correlation, which should be noted. “It’s more important,” he says, “to focus on this possibly substantial decrease in the number of police killings as a result of Black Lives Matter.”

The difference was significant in this study: it found police killings fell by 16.8 percent on average in municipalities that had BLM protests, compared with those that did not. When Campbell compared municipalities that already had similar trends in police homicides before BLM began, the estimate rose to 21.1 percent. The specific mechanisms that might be involved in such a decline remain unclear. BLM protests may have this effect because they push police departments to adopt reforms such as body cams or community policing, as the study found. Another reason may be that the protests affect police morale, causing officers to adopt a less aggressive patrolling posture that reduces police-civilian interactions in general. And not all cities experienced declines amid the protests. Police homicides increased in Minneapolis, Portland, San Francisco and St. Louis during the five-year period Campbell studied.

Representative Cori Bush of Missouri, a Democrat elected in 2020 to represent the congressional district that includes St. Louis, worked as a triage nurse and organizer during the 2014 protests in Ferguson, Mo. (which is part of the St. Louis metropolitan area). “Decreasing police killings still means people are being killed by police,” Bush says. “And here in St. Louis, where the modern movement fighting for Black lives was born, we haven’t seen a decrease at all.” She notes that human rights activist Malcolm X once said progress involves healing historic wrongs. “The fact of the matter is that we need to see structural change, because our current criminal legal system is structurally unable to deliver the progress that Malcolm X outlines.”

Pulley says the Black Lives Matter movement can take some satisfaction in its possible impact on police homicides. “We should use that knowledge to know that the work we’re engaged in—the movement, the advocacy, the organizing—is what we need,” she says. “And that needs to expand and get broader, so we can join much of the rest of the world in having zero police killings. We can get there. That takes continued and persistent organizing.”

[Jim Daley is a science journalist based in Chicago. See more of his writing at www.jimdaleywrites.com]