The US has launched hundreds of deadly airstrikes in Syria, Iraq and Yemen in recent months, but putting boots on the ground in Syria signals a new level of participation in a war that Russia is also fighting. The Syrian government's ambassador to the United Nations claimed recent US military actions constitute an "illegitimate" invasion. 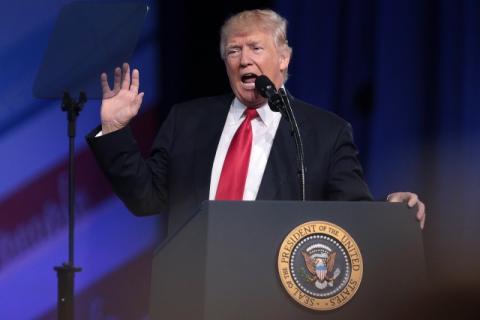 As a House committee held the first congressional hearing on the Trump campaign's alleged ties with Russia this week, Republicans loyal to Trump tried to shift the focus to recent leaks surrounding it, as well as efforts to gather intelligence on Trump's transition team under the outgoing administration. Other conservatives are distancing themselves from Trump, perhaps in case FBI Director James Comey's investigation bares fruit. Democrats, meanwhile, took advantage of a fresh opportunity to place Trump as close to Russian President Vladimir Putin in the headlines as possible.

At the same time, in northern Syria, US warplanes and artillery units launched strikes against the Islamic State to cover for helicopters ferrying Syrian fighters and their US military advisors behind enemy lines. The operation has set the stage for a long and presumably bloody siege of Raqqa, the Islamic State's self-proclaimed capital. At least 33 people were killed when an airstrike by the US-lead coalition hit a school where civilians were hiding from the fighting, according to The Guardian. The number of US troops in Syria as grown from a couple hundred to at least 1,000 over the past few weeks.

"This represents a very serious escalation, and so far the media really isn’t reporting on it," said James Carden, the head editor for the American Committee for East-West Accord. Carden describes the group, a committee of academics, business leaders and former dignitaries, as essentially "pro-détente."

The US has launched hundreds of deadly airstrikes in Syria, Iraq and Yemen in recent months, but putting boots on the ground in Syria signals a new level of participation in a war that Russia is also fighting. The Syrian government's ambassador to the United Nations claimed recent US military actions constitute an "illegitimate" invasion.

Russia entered the conflict in 2011 to defend Syrian President Bashar Al-Assad against rebel uprisings that were initially supported by the Obama administration, but Russia and the US have found a common enemy in the Islamic State during the ensuing years of violence and chaos. The US and Russian militaries are operating close to one another in Syria -- sometimes too close for comfort -- but they have not agreed to work together, although Trump has entertained the idea.

"You have a dangerous situation in Syria, where the [US and Russia] are operating in close proximity. Also, you also have a situation in the Baltics and the Ukraine, where the Russians and NATO troops are also nose to nose," Carden said. "This is an exceedingly dangerous moment."

A handful of progressive Democrats and one Republican in Congress are demanding a halt to the military escalation in Syria. They introduced legislation this week that would prohibit the Defense Department from putting more boots on the ground without congressional approval. Rep. Barbara Lee (D-California) issued a statement declaring that the "executive branch has waged endless war in the Middle East with no meaningful oversight from Congress." President Trump's "decision to drag us deeper into this quagmire," she said, "endangers our troops and long-term national security."

Lee and her antiwar allies made a few headlines, but most of the news media and the rest of Congress couldn't be bothered. Under the Constitution, only Congress has the power to declare war -- but Congress has not made such a declaration since World War II, despite the multiple wars the US has fought since then. As demonstrated by former President George W. Bush's 2003 invasion of Iraq, war powers have migrated alarmingly toward the executive branch, while Congress repeatedly signs blank checks to keep the wars going.

As for the current executive branch, Trump seems to remain certain that he can do and say whatever he wants, despite his rather public habit of ignoring basic facts. As he told Time magazine this week, "I'm the president, and you're not."

Members of the American Committee for East-West Accord include former Secretary of Defense Chuck Hagel and Jack Matlock, one of the last US ambassadors to the Soviet Union, along with a number of academics and a few corporate CEOs. The group says cooperative efforts between the US and Russia over arms control and nuclear nonproliferation have been deteriorating since 2014, when western powers began a face-off with Russia over the future of the Ukraine. Now, they are "deeply concerned" about a new and "potentially even more dangerous" Cold War with Russia, and the current goings-on in Washington are not making them feel any better.

Carden and Stephen F. Cohen, a member of the committee and professor of Russian Studies at New York University and Princeton, are spreading their message in the pages of The Nation, where Cohen is a contributing editor. They warn that "neo-McCarthyism" threatens a longstanding détente with Russia, and war could be the result. Carden likened the House intelligence committee's hearing on the FBI to "political theater" for a partisan audience and urged lawmakers to address the situation in Syria instead.

Putin has proven his views to be in line with those of Trump and Trump's allies in a number of ways. His oligarchic practices, dismal human rights record, and policies attacking the rights of women, LGBT people and Muslims -- not to mention his recent endorsement of Marine Le Pen for the French presidency -- have demonstrated as much.

However, many have jumped to the conclusion that Putin is directly to blame for Trump's presidency (and thus, his extreme right-wing agenda and xenophobic crackdown Muslims and immigrants), placing a laser focus on Russia during this precarious time.

The results of the FBI's counterintelligence investigation remain important to many. Voters want to know whether Trump operatives colluded with the Russians during the election, and whether there is hard evidence that DNC email accounts were indeed hacked by Putin's cyber henchmen -- rather than leaked from the inside, as some analysts have suggested. Yet there's no full consensus on how these allegations should be approached.  Some critics are calling for an independent investigation.

Will Democrats Hammer Trump on Ethics?

Others wonder why -- given Trump's ludicrous and harmful behavior on many fronts -- leading Democrats have made Russia their focus. Ethics advocates have provided plenty of ammunition to undermine the White House, but efforts to hold Trump accountable for ethics violations have fallen by the wayside.

Last month, activist attorneys laid out their case for impeaching Trump, arguing that a long list of Trump's business interests violate the emoluments clause of the Constitution, which prohibits the president from receiving "gifts" and other benefits from foreign countries. All Congress needs to do, they said, is take their argument and run with it. In January, legal advocacy organization Citizens for Responsibility and Ethics in Washington (CREW) filed a lawsuit against Trump on similar grounds after he refused to completely divest from his business holdings.

"So, the rule is that [the president] can’t take payment from a foreign government, and the biggest tenant in Trump Tower is a Chinese bank owned by a foreign government," said CREW spokesman Jordan Libowitz, referring to one of Trump's several alleged violations of the emoluments clause. "That's an undeniable thing that is happening right now -- the Chinese government is renting space from Donald Trump."

On March 8, CREW and other watchdog groups asked Pareet Bharara, then a star US Attorney in New York, to investigate the allegations made in the complaint. Trump abruptly asked Bharara to resign two days later -- but Bharara wouldn't budge, forcing the president to fire him. Reports indicate that the president had originally asked Bharara (who had been appointed by former President Barack Obama) to stay in the position, but Trump changed his mind within days.

Trump's conflicts of interest continue to make headlines, but Democrats have not taken decisive action on this front. Perhaps leading Democrats don't think CREW has a strong enough case against Trump, and casting the president as a Cold War traitor is a better way to dismantle his credibility and clog up Congress so the Republican majority can't advance its legislative agenda. Maybe the Democrats are simply looking to amass all the ammo they can get, and they will return to Trump's business holdings if Comey's investigation of the Trump campaign comes up cold.

While politicians in Washington place their bets on Trump's alleged Russia connections, our soldiers are on the ground in war-torn Syria, with US and Russian warplanes sharing the skies overhead. Secretary of State Rex Tillerson, whose career as an oil baron brought him close to Russia, forced NATO to reschedule a meeting because he planned to skip it and meet with China and the Russians instead. In the vacuum left by the Obama administration, which -- while vocally criticizing Russia's gruesome human rights record -- quietly sought to cooperate with Moscow on efforts like nuclear nonproliferation, there is no coherent policy towards Russia emerging in Washington.

What we do know is that the US is still at war in the Middle East, where the language of our foreign policy is violence. Unfortunately, most of our leaders would rather talk about anything else.