“When we are really honest with ourselves, we must admit that our lives are all that really belong to us. So it is how we use our lives that determines what kind of people we are. ..I am convinced that the truest act of courage..is to sacrifice ourselves for others in a totally nonviolent struggle for justice.” Cesar Chavez (1927-1993) 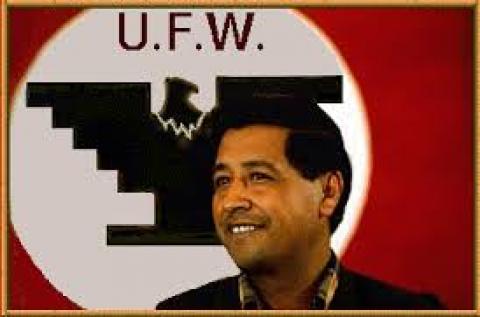 Conferences, marches and celebrations will occur in numerous cities and particularly in rural areas of the nation. A recent film Cesar Chavez: An American Hero, starring Michael Peña as Cesar Chavez and Rosario Dawson as Dolores Huerta presents important parts of this union story.

The current UFW leadership, as well as former UFW leaders and current DSA Honorary Chairs Eliseo Medina and Dolores Huerta are recognized leaders in the ongoing efforts to achieve real  immigration reform in the nation.

UFW President Arturo Rodriquez says, “We urge Republicans to abandon their political games that hurt millions of hard-working, taxpaying immigrants and their families, and help us finish the job by passing legislation such as the comprehensive reform bill that was approved by the Senate on a bipartisan vote in June 2013,” Rodriguez said. “The UFW will not rest until the President’s deferred relief is enacted and a permanent immigration reform, including a path to citizenship for all 11 million undocumented immigrants, is signed into law.” http://www.UFW.org

Let us be clear. Chavez was religious, but he was not a saint. Neither were the growers, their Teamster collaborators, nor corporate agribusiness saints. Celebrations should not be about hero worship or uncritical praise, nor should we ignore the present oppression of farm workers in the U.S.

What they did accomplish along with Philip Vera Cruz , Larry Itlong, Marshall Ganz, LeRoy Chatfield, Gil Padilla, Eliseo Medina and hundreds of others was to   organize in California the first successful farm worker union against overwhelming odds. With the work of the Chicano/Mexican American Digital History Project their story of union organizing will begin to be covered in all public school history texts in California this year.

Each of the prior attempts to organize a farm worker union had been destroyed by racism and corporate power. Chavez, Huerta, Philip Vera Cruz, and the others deliberately created a multiracial union; Mexican, Mexican American, Filipino, African-American, Dominican, Puerto Rican and Arab workers, among others, have been part of the UFW. This cross racial organizing was necessary in order to combat the prior divisions and exploitations of workers based upon race and language. Dividing the workers on racial and language lines, as well as immigration status always left the corporations the winners.

The violent assaults on the farmworkers and UFW from 1960- 1980 along with the current reconquest of power in the fields by corporate agriculture are examples of strategic racism, that is a system of racial oppression created and enforced because it benefits the over class- in this case corporate agriculture and farm owners. Strategic racism as described by Ian Haney López in Dog Whistle Politics: How Coded Racial Appeals Have Reinvented Racism & Wrecked the Middle Class ( 2014) is the development and implementation of racial practices because they benefit a group or a class.

Chávez chose to build a union that incorporated the strategies of social movements and community organizing. They allied the union   with churches, students,  and organized labor.  The successful creation of the UFW changed the nature of labor organizing  in the Southwest  and contributed significantly to the growth of Latino politics in the U.S.

As the holiday is celebrated the critics of Chavez and the UFW usually re- emerge. These critics have been covered in prior posts here, so I will not repeat them. https://talkingunion.wordpress.com/2015/03/23/cesar-chavez-the-ufw-and-why-unions.

We are all experiencing a major restructuring of the global economy. This restructuring is directed by the transnational corporations to produce profits for the corporate owners. The impoverishment of the vast majority of people in pursuit of profits for a small minority has pushed millions to migrant in search of food, jobs, and security. Global capitalism produces global migration. NAFTA and other “Free Trade” deals each produce a new waves of migration. The UFW , like other unions is suffering.

A result is a situation in which workers on both sides of this border and around the world have been disempowered and impoverished. When factories can pull up stakes and move but workers can’t, labor unions and even local governments lose their power to hold capital accountable, and all workers are forced to accept ever worsening wages and working conditions. Farmworkers too are suffering.

The problem with our economy is not immigration; the problem is our broken immigration laws that allow business to exploit workers who lack legal status, driving down wages for all workers. If every immigrant were allowed to get into our system, pay their dues, and become a citizen, we could block the corporations exploitation and eliminate the two-tiered workforce while building a united labor movement that raises wages and living standards for all workers.

The UFW under current president Arturo Rodriguez is a major player in the many efforts to resist the Trump Administrations’ new assault on immigrants.

The assault on the UFW and the current reconquest of power in the fields are examples of strategic racism, that is a system of racial oppression created and enforced because it benefits the over class- in this case corporate agriculture and farm owners. The current renewed oppression is a product of strategic racism including a complex structure of institutions and individuals from police and sheriffs, to immigration authorities and anti immigrant activists, and elected officials and their support networks. These groups foster and promote inter racial conflict, job competition, and anti union organizing, as strategies to keep wages and benefits low and to promote their continuing white supremacy in rural California.

The UFW has its problems, as do other larger unions such as the UAW, the Teamsters, and the USW, among others. But even while under attack, the UFW joined with other unions to gain a minimum wage increase to $ 11 per hour in 2018 increasing in steps to $15 per hour in 2022, and they gained overtime legislation for farmworkers- a historic breakthrough. The critics of Chavez, Huerta and the UFW in the same period published articles in magazines.

Marshall Ganz, who was a leader in the union and a participant in the internal struggles, tells a more complex and more complete story in his book, Why David Sometimes Wins. (2009) See the review in Talking Union https://talkingunion.wordpress.com/2009/10/16/why-david-sometimes-wins-marshall-ganz/

This isn’t to say that Chavez, Huerta and many on the UFW Executive Board did not have shortcomings. They did. Ganz describes several of these in his book and in interviews he participated in for the new book, From the Jaws of Victory by  Matt Garcia (2012). Ganz provide some well researched and insightful observations on the dynamics of a union trying to transition from a movement to a union- or to something else. This analysis is helpful to organizers trying to build unions.

There were conflicts and internal contradictions. Not many movements last for even ten years let alone thirty.   In addition to the assault from corporate agriculture, the Republican Party, Ronald Reagan, neoliberalism and racism, the UFW was confronted with internal union struggles for democracy, an intra union assault by the Teamsters, and with the tumultuous and disruptive politics on the left in the 60’s and 70’s.

The role of racism, and the individual reactions to systemic structural racial oppression are complex and vary in part based upon the differences in experiences of the participants.

Marshall Ganz in Why David Sometimes Wins, does a good job of describing the internal dynamics of UFW organizing- after all he was there. He describes some of the racial fault lines of farm worker organizing. Ganz was the director of organizing for the UFW in Salinas and a long time member of the UFW executive board.

The critics who blame individuals for the union’s current status also miss the important rise of Latino politics in the Southwest today.  Chavez and the UFW played a significant role by training generations of future leaders as organizers as is well described in Randy Shaw’s, Beyond the Fields: Cesar Chavez, the UFW, and the Struggle for Justice in the 21st. Century.   The UFW was a place where hundreds learned organizing skills, politics, discipline, and how to work in multi racial movement politics – skills needed by many on the left.   Today hundreds of union and community leaders, particularly in California are veterans, trained in for the long distance struggle of the UFW.

The movement led by Cesar Chavez , Dolores Huerta and others created a union and reduced the oppression of farm workers for a time.   Workers learned to not accept poor jobs, poor pay, unsafe working conditions as natural or inevitable. Then the corporations and the Right Wing forces adapted their strategies of oppression.

As the union was weakened by the Right Wing corporate assault, the conditions in the fields returned almost to their prior level of exploitation. Now, thousands of new immigrants harvest the crops and only a small percent are protected by union contracts. Over 200,000 indigenous workers, mostly from Mexico, harvest the crops in the Southwest. They are Mixtec, Zapotec, Triqui and more. They do have a few health, safety and wage protection by California labor laws, along with the right to farm worker collective bargaining elections and binding arbitration established significantly by the political activity of the current UFW – more than farm workers have in any other state. And they will benefit from the new gains in the minimum wage laws and overtime protection.

Beyond the conflicts over the Chavez and Huerta legacy, the more important points are the current conditions of farmworkers in the U.S. and in Mexico. Labor journalist David Bacon has written important pieces on this including , his, Illegal People: How Globalization Creates Migration and Criminalizes Migrants, (2008) The Children of Nafta, and The Right to Stay Home: How U.S. Policy Drives Mexican Migration. (2013). See review here https://talkingunion.wordpress.com/2013/11/26/the-right-to-stay-home-how-u-s-policy-drives-mexican-migration/.

Duane Campbell is a professor emeritus of bilingual multicultural education at California State University Sacramento, a union activist, and former chair of Sacramento DSA.  He was a volunteer for the UFW from 1972- 1977. He is the  Co-Director of the Mexican American Digital History project. http://www.MexicanAmericanDigital History.org

He is also the co-chair of DSA’s Immigrants’Rights Committee. The committee can be found on the dsa website www.dsausa.org