Meet the New Sesame Street Superhero! Can She Beat the Whitehouse Grinch?

Sesame Street is going to introduce a new cast member next month. Her name is Julia and she’s a puppet with autism. 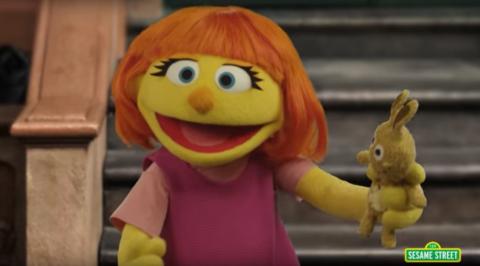 Today I have good news, followed by bad news. But then it comes back around to good news again.

Sesame Street is going to introduce a new cast member next month. Her name is Julia and she’s a puppet with autism. When I first heard of this, I was skeptical. I figured Julia would be one of those “high-functioning” people with autism, meaning she’s on the more socially acceptable end of the autism spectrum. In other words, a Rainman stereotype.

But Julia flaps her arms and freaks out when she hears sirens. That’s pretty raw, which makes it pretty cool to me. The Sesame Street people weren’t afraid to put a disabled character out there who might stir up some discomfort.

Julia often communicates by saying single words like “play” and “butterfly.” Her playmates learn that she thinks and learns and expresses herself differently, but otherwise she’s just like them. That’s the first bit of good news.

But you might want to make sure your kids don’t get too attached to Julia, because she may not be around for very long.

There’s a rampaging Grinch on the loose; he was last seen occupying the White House. The Grinch just released his first budget proposal and what a doozy. Among other travesties, it contains zero dollars for the Corporation for Public Broadcasting. But hey, don’t blame the Grinch. He’s just trying to fulfill a major campaign promise. Remember all those campaign rallies where his rabid followers hung Big Bird in effigy?

I can see why the Grinch would have a major beef with Sesame Street. He probably thinks they’re fake news because they teach children that the Earth revolves around the sun, rather than around him.

So that’s the bad news. But the other good news is that the Grinch may have finally met his Waterloo with this move. By threatening to bulldoze Sesame Street and make Julia into a martyr, he could turn her into the face of the resistance.

Some shrewd Democrat ought to take advantage of the opportunity. He/she ought to introduce an amendment to restore all public media funding and call it the Julia amendment. The best way to make a piece of legislation bulletproof is to name it after a child, especially a disabled child. In this case the disabled child is a puppet, but close enough. Who’s going to take the floor a speak out against courageous little Julia? I don’t think even the Grinch can get away with that.

Once that nasty little line item is obliterated by the sheer power of Julia’s pure innocence, I hope the Sesame Street people won’t stop there. I hope they’ll turn Julia into an influential spokespuppet, by having her say single words like “Medicaid.” And then her playmates can learn how important Medicaid is and how the Grinch aims to screw millions of people like her out of it.

Imagine the tweets the livid Grinch will fire off as he sits on the toilet at 4 a.m.: “Autistic puppet Julia is a loser. Obama pulling her strings. Sad.”

Become a Monthly Sustainer (just $5 a month and you’ll receive the print magazine too!) or support The Progressive’s online reporting with a one-time donation