We need to radically change the way we see our history otherwise we end up with incorrect assumptions that permeate the way we think. U.S. immigration policy historically had injustice built into it creating untold human suffering. Moreover, it is difficult to separate immigration policy from foreign policy. No one wants to leave their homes unless it is a refugee situation. 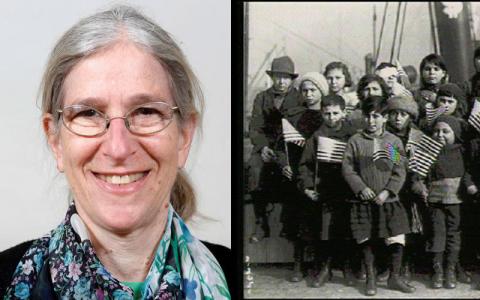 Historian Aviva Chomsky asks us to examine critically how immigrants have been treated in the United States., Labor World

Our national quarrel over immigration that was reignited during Donald Trump’s campaign is actually older than this nation. Yet, there has been little substantive debate since his inauguration as the dictates two weeks into his administration showed.

His first dictate could not stand up to the rule of law or the Constitution. So he tried again March 6 with a little softer approach that still offended a majority of Americans, judges, and state attorneys’ general.

The nation would have been better served if President Trump would have waited a day and had sat quietly in the College of St. Scholastica’s Mitchell Auditorium March 7 prior to his second dictate. He would have gotten an historical and social justice perspective on immigration from guest lecturer Aviva Chomsky that would have served us better.

Chomsky did not, however, lay the blame on Trump for where he had arrived on the immigration question.

“It’s not like we had a generous immigration policy that Trump was trying to displace,” Chomsky told a gathering of over 100 people.

She said we need to radically change the way we see our history otherwise we end up with incorrect assumptions that permeate the way we think.

And so we end up with the mess that is our national quarrel on immigration.

Chomsky is a professor of history and coordinator of Latin American, Latino and Caribbean Studies at Salem State University in Massachusetts. She was born into a family of scholars who included her father, linguist Noam Chomsky. She worked for the United Farm Workers in 1976 and 1977, an experience that sparked her interest in migrant workers, labor history, and the effect of global economic forces on individuals.

She has studied and written on immigration in the 2007 “They Take Our Jobs And 20 Other Myths on Immigration,” and the 2014 “How Immigration Became Illegal.”

Those in Mitchell Auditorium the night of March 7 got an immigration lesson in an hour and a half.

Chomsky broke down U.S. immigration into four major time periods and addressed each through lenses of race, geography, and labor to show how we’ve ended up with such a skewed interpretation of immigration today.

The first “old immigration” period was from the early 1600s to the end of the 1800s. This was the English Protestant arrival on the East Coast where family groups formed small agricultural self-sustaining villages.

Chomsky said it laid the groundwork for a white supremacist interpretation because it obscured the history of Native Americans and then Africans, who were brought here as slaves “to produce plantation products for export.” People of color who were brought here were erased, she said, and what was happening elsewhere in the large land mass of America was ignored.

A new period of non-English speaking, non-Protestant immigrants emerged about 1850. They came from Italy, Greece, Turkey, Russia, Poland. They were Catholic, Orthodox, and Jewish. They didn’t come to start small villages but to work in factories in big towns.

Though welcomed by the Statue of Liberty, which was dedicated in 1886, this wave of immigrants found problems similar to the old immigrants. But at least they were somewhat welcomed unlike the Chinese, who were banned at Angel Island on the West Coast by the 1880s.

Mexicans in large numbers were also coming but not welcomed as they crossed the border. The labor of the Chinese and Mexicans was needed to build railroads, work mines and agriculture but they were left out of any immigration discussion because they weren’t white.

The third period was from 1920 to 1965 and it was a focus on immigration restriction that found quotas being enforced even on Europeans. Chomsky said it didn’t affect Asians and Mexicans because they were already prohibited.

The fourth period was post 1965 when restriction quotas were dismantled. Today we are still under that system that is supposed to be open immigration to the entire world. What we have is the United States being a white country made up of primarily people of color, said Chomsky.

She gave that overview and then provided an historical background for it.

King George III issued the Proclamation of 1763 that slowed white immigration by recognizing Native America rights to land. That didn’t sit well with the colonists that wanted more land and needed to displace native populations.

The American Revolution ensued. Chomsky said it was unlike any other colonial revolution in that it was pro colonial, while most revolutions were efforts to kick colonizers out.

In 1790 a uniform rule of naturalization was passed in the new U.S.A. that said a “free white person” here for two years would become a citizen.

In 1868 the 14th Amendment to the Constitution attempted to assuage the ill feelings of the Civil War by extending citizenship to those born here or naturalized.  It wasn’t just white people anymore, but Native Americans were not included, Chomsky said.

Two years later the Naturalization Act of 1870 extended citizenship to aliens of African descent. But by 1870 there were no Africans emigrating here so there was no need to print a lot of citizenship applications as a result of that act.

“The words look good on paper,” Chomsky said, but Chinese and Mexicans were still left out.

Legislating immigration had become popular with the 1862 Homestead Act, the 1882 Chinese Exclusion Act, the Dawes Act in 1887, the 1917 Asiatic Banned Zone, and the 1924 Immigration Act, Chomsky said. Immigration was being restricted by race, including in 1873 when Chinese women were restricted from having babies in the U.S.

The Homestead and Dawes acts further dispossessed Native Americans from much land in the south, midwest, and southwest for white immigrants.

The 1917 Asiatic Banned Zone covered three quarters of the world, Chomsky said. It was made permanent in 1924.

Mexicans were treated differently because their labor was needed here. But they could be deported, especially before they had babies that could become citizens.

The Mexican American War of 1846–1848 found the victorious U.S. taking 55% of Mexico in a “take the land, but not the people” settlement. The border was drawn to avoid Mexican people but to take advantage of mining, railroad, agriculture, and logging resources. Mexican workers would be invited in, then deported.

The first Bracero Program came in 1917 to 1922 which made it legal to bring in workers recruited in Mexico. While private firms brought in workers, the U.S. government also financed recruitment and was the only entity that could deport Mexican workers.

The Great Depression found one million “of the mongrel race” as they were called, repatriated because there was no work.

World War II brought a second Bracero Program since workers were needed. It lasted until 1967 with 400,000 Mexicans a year being brought in and sent out again as deportees.

The 1965 Hart Celler Act capped quotas for all nations at 20,000 a year. Chomsky said think of white Luxembourg getting the same number as China. The Mexican border wasn’t closed, but the Bracero Program was over as Mexicans were considered illegal after 20,000 had come.

“We still live under the regime of illegality today to make sure Mexicans remain deportable,” Chomsky said.

She said U.S. immigration policy historically had injustice built into it creating untold human suffering. The effort to close the Mexican border in the 1990s found the number of undocumented people skyrocketing. That ended with the 2008 economic crash in the U.S. resulting in a migration shift of Mexicans leaving she said. It’s at a net zero now, she said, as we discuss even more militarization of the border, and a wall.

In answering a question in closing, Chomsky said it is difficult to separate immigration policy from foreign policy. She said no one wants to leave their homes unless it is a refugee situation. Open borders would find people coming here to visit and returning home, she contends.

The immigration conflict in America has seen the rise of 917 active hate groups in the U.S. according to the Southern Poverty Law Center. Many have as their guiding principle “Make America White Again.” That won’t happen in spite of 241 years of trying, but it does create conflict.

Larry Sillanpa is the editor of the Labor World newspaper and a frequent contributor to Workday Minnesota.