Unlike in 2015 when Sanders introduced a similar bill, this time the legislation has multiple co-sponsors in the Senate and the House 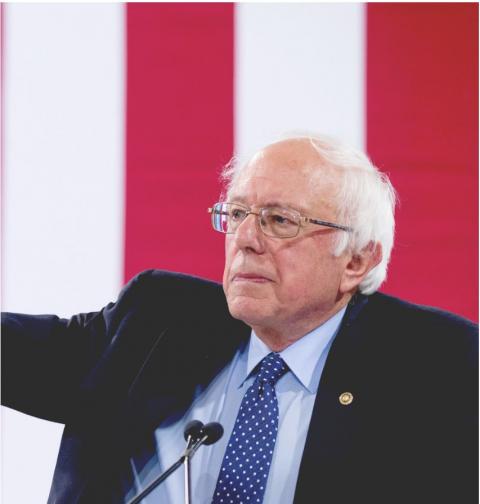 , ANDREW HARNIK/AP/REX/SHUTTERSTOCK.
Bernie Sanders is back in the game with legislation that could potentially make public colleges and universities tuition-free.
On Monday, the Vermont senator introduced a bill called the College for All Act at the Dirksen Senate office building in Washington, D.C. The legislation would not only make public institutions tuition-free to students whose family income is less than $125,000, but it would also eliminate tuition at community colleges, cut the interest rates of student loans in half, and increase the Federal Work-Study program's funding.
"Our job is just not to resist all of Trump's dumb proposals, including massive cuts in education," Sanders said when he introduced the plan. "Our job is to bring forward a progressive agenda, which represents the young people, and old people, and the working people, and poor people all over this country."
Unlike back in 2015 when Sanders introduced a similar bill, this time the legislation has multiple co-sponsors and overall support from Democrats throughout Congress. Some of the supporters who are also sponsoring the legislation in the Senate include Sen. Elizabeth Warren, Sen. Kamala Harris, Sen. Richard Blumenthal, and Sen. Kirsten Gillibrand. The House companion bill will be sponsored by Rep. Pramila Jayapal, Rep. Rick Nolan, and Rep. Keith Ellison.
"This legislation would provide $47 billion per year to states to eliminate undergraduate tuition and fees at public colleges and universities," read a press release from Sanders' office. "Today, total tuition at public colleges and universities amounts to about $70 billion per year. Under the College for All Act, the federal government would cover 67% of this cost, while the states would be responsible for the remaining 33% of the cost."
The College for All Act is identical to the plan Sanders worked on with then-presidential candidate Hillary Clinton.
"Higher education in America should be a right for all, not a privilege for the few," Sanders said at an event to introduce the bill. "If we are to succeed in a highly competitive global economy and have the best-educated workforce in the world, public colleges and universities must become tuition-free for working families and we must substantially reduce student debt."
It's important to note that it's highly unlikely the bill will pass through Congress and become law, because Republicans control both houses and the White House. Back in 2016, President Trump said, "There’s no such thing as free education."
But if the legislation accomplishes anything, it's putting in focus the priorities of members of the Democratic party.
And not all hope is lost, after all: Morley Winograd, president and CEO of the Campaign for Free College Tuition, told Inside Higher Ed that free college programs have been successfully implemented at the state and local levels with bipartisan support.
"There are as many red states as blue states that have taken steps on free college," he said.
Would it be too much to ask for the Dems and the GOP to work together on something that will benefit generations to come?