In a country with Latin America’s highest death rate from diabetes, peasant communities are at risk thanks in part to Coca Cola addiction. 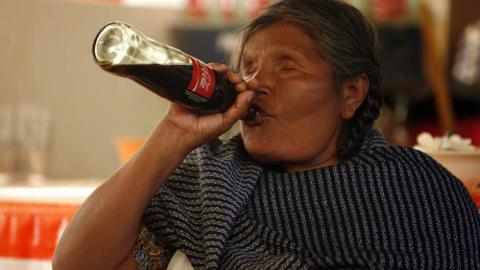 Guadalupe Sánchez has the cracked hands of a corn grower and the clean blood of a former Coca-Cola addict.

“I used to drink three one-liter bottles a day. As soon as I woke up in the morning, I would have the first glass with my tortillas, and I would continue throughout the afternoon and evening,” he says, while a rafter of turkeys peck at the ground outside his front door.

Sánchez built this house with his own hands for himself, his wife, their eight children and seven grandchildren. The walls are made of grey cement and the roof is unfinished.

— How did you feel after having so many soft drinks?

— I felt very weak. I almost couldn’t go out to work. It was hot in the field so I drank more Coke. But I started to notice that I was losing my eyesight and that my tongue was kind of stiff.

—How did you manage to quit?

It’s hard because everyone offers you a drink. When you go visit someone they give you a glass, and it’s bad manners to reject it. But the doctor told me I had to quit and he gave me some pills. I also started chewing a plant that we call Hoja de burro (Donkey leaf), which helps you not to drink.

In the indigenous community of the Mazahuas in San José del Rincón, a wooded village in western Mexico state, there are homes without running water but with a bottle of soda sitting permanently on the dinner table.

At age 47, Sánchez’s blood sugar level has been as high as 200mg/dL, twice the threshold for risk. Many of his neighbors are in a similar situation.

“It’s like a poison, it really hurts us,” says Leticia Cruz, 41, who is back from a stroll with her three grandchildren. “When I stay with them because their mother went to to work, Cola is not allowed,” she says.

A group of nutrition students at Tec University in Monterrey, one of Mexico’s most expensive and prestigious higher education centers, visited this community during the entire month of September.

The students who took blood samples from local residents were not accustomed to seeing such rough skin as José Polo’s, and were forced to use a sharper needle to prick the fingers of this 18-year-old, who unloads trucks and stocks supermarket shelves for a living. His test showed a glucose level of 150 mg/dL.

“We are finding strong level of hyperglycemia,” says Yaremi Gutiérrez, the university teacher who coordinated the visits. “This is a faithful reflection of the high consumption of sugary drinks and processed food, which lacks the necessary nutrients.”

The Mazahua people are abandoning their millenary diet based on pulses and vegetables, and increasingly adopting junk food. The combination of poverty, social exclusion and junk food is lethal: “Especially in children, we are also seeing what is known as the double load of disease: malnutrition and excess weight.”

Mexico is going through a fat and sugar epidemic. Seven out of every 10 adults are overweight or obese, and so is one out of every three children. It is the world’s second country with the highest overweight and obesity rates, after the United States.

According to the World Health Organization (WHO), Mexicans are the people who consume the most soft drinks —163 liters a year—and who die the most of diabetes in all of Latin America.

“Diabetes used to be a rare disease affecting mostly a mature population that was genetically predisposed to it. But in the last 30 years there has been a huge explosion, to the point that in the last six years, half-a-million Mexicans died of diabetes,” says Dr Abelardo Ávila, of the Salvador Zubirán National Institute for Medical Sciences and Nutrition.

“In this scenario, the indigenous population is the most vulnerable, and has higher rates,” continues Ávila. “Poverty used to protect them in that it forced them to eat what they grew in the fields. But starting in 2010 there’s been an expansion by soft-drink makers following a strategy to bring refrigerators to communities that have electricity, and to favor the transfer of public subsidies to the consumption of this type of food.”

At the grocery stores in the village, a liter of milk – if there is any to be found – costs 16 pesos, while a three-liter bottle of Coca-Cola is 35 pesos and a generic brand is 20 pesos.

Diabetes can trigger a whole series of medical conditions ranging from blindness to malfunctioning kidneys and “elephant’s foot,” in which patients gradually lose feeling in the joints. This last condition was responsible for 75,000 amputations last year, according to the association El Poder del consumidor.

“The worst part is that diabetes is a disease that can be kept under control, but because they lack access to services, this population is very exposed,” adds the Tec instructor.

The nearest health center is an hour’s walk away from San José del Rincón. A group of women has made the journey, but the doctor is not there. The nearest hospital is an hour away by car. And dialysis is not covered by public healthcare for informal workers such as these peasants. Each dialysis session costs anywhere between 2,000 and 6,000 pesos.

Ildefonso Álvarez has been working with communities for two years at the helm of his association, Concreta.

The United Nations has even talked about a “cocacola-ization” of consumer habits in Mexico.

“By 2017, the public system will need $5.6 billion a year to treat diabetes. This is the result of public policies that have not taken into account the scope of this serious problem,” said Oliver de Schutter, United Nations Special Rapporteur on the right to food, in a recent documentary made by civil organizations in Mexico.

Last year, the government introduced a special tax on sugary beverages, following other nations’ lead. For now, tax receipts have increased, but consumption has barely gone down.

There is no drinking water inside the home of Tomasa Rodríguez and Hilario Cruz. There are four members in the family, and they buy a 20-liter bottle at the store every week. For years they’ve been asking the mayor for a well, like other communities in the area. Cruz was recently in the hospital.

“I felt very heavy, I could barely eat,” he recalls. He did, however, consume soft drinks (“and beer and pulque”, adds his wife, the latter beverage an alcoholic drink made from the maguey plant). Cruz had to get a colon cleansing because of a severe case of constipation. Doctors said he could no longer have soft drinks or alcohol, and all he drinks now is water and teas made with Hoja de burro. It may leave a bitter taste in his mouth, but it’s better than the alternative.