It's Not Just Syria. Trump is Ratcheting Up Wars Across the World

Recently, US airstrikes have claimed the lives of 200 civilians in Iraq, dozens were killed in separate strikes supposedly aimed at Islamic State in Syria and several more women and children died in a raid gone awry in Yemen. Those are just a few examples of the many attacks – launched under the pretext of defeating Isis – that wreaked havoc on civilian populations as the US military ramps up its bombing campaigns in multiple counties. 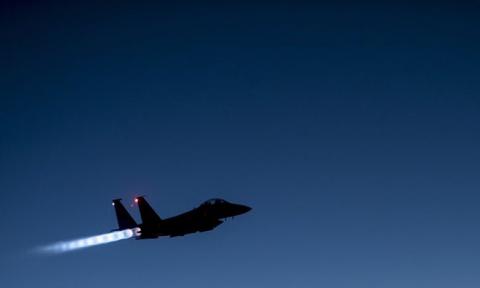 ‘In March, Trump carried out a drone strike every 1.8 days, compared to every 5.4 days under Obama.’ , Senior Airman Matthew Bruch/AFP/Getty Images

Donald Trump’s missile strikes on Syria have attracted worldwide attention (and disgraceful plaudits) in recent days. But much less airtime is being given to his administration’s risky and increasingly barbaric military escalations on several other fronts across the world.

Let’s put aside, for the time being, that the Trump administration openly admits it has no clue what it is going to do in Syria next. Or that key members of Congress and in the administration are clearly eager for “regime change” in Syria with no plan for the aftermath. And the fact that hardly anyone seems to care that Russia’s former president Dmitry Medvedev said over the weekend that Syrian strikes put the US “on the verge of a military clash with Russia” – a nuclear power with thousands of warheads.

As troubling as these developments are, we should be just as concerned about the explosion of civilian deaths – more than 1,000 in March alone – that have come directly as the result of the Trump administration’s other reckless military campaigns across the Middle East over the past few weeks.
Recently, US airstrikes have claimed the lives of 200 civilians in Iraq, dozens were killed in separate strikes supposedly aimed at Islamic State in Syria and several more women and children died in a raid gone awry in Yemen. Those are just a few examples of the many attacks – launched under the pretext of defeating Isis – that wreaked havoc on civilian populations as the US military ramps up its bombing campaigns in multiple counties.

At the same time, the Trump administration has been expanding official US “war zones” in Somalia and Yemen, while working to “make it easier for the Pentagon to launch counterterrorism strikes anywhere in the world” and loosening restrictions on preventing civilian deaths that were put in place by the Obama administration, as the Washington Post reported a few weeks ago.

Drone strikes, already accelerated under the Obama administration, have increased even more under Trump. Micah Zenko, who tracks the numbers at the Council on Foreign Relations, noted in March that Trump was carrying out a drone strike every 1.8 days, compared to every 5.4 days under Obama.

On the other side of the world, the Trump administration is responding to North Korea’s nuclear program with even more saber rattling, sending in US ships over the weekend to the region as some vague “show of force”.

This comes just as NBC News reported, “the National Security Council has presented President Donald Trump with options to respond to North Korea’s nuclear program – including putting American nukes in South Korea or killing dictator Kim Jong-un”. Pressure is mounting from the outside too, as the Wall Street Journal’s right wing neocon-in-residence Brett Stephens loudly called for “regime change” in North Korea two weeks ago.

And then there’s Iran, which the Weekly Standard’s Bill Kristol is once again saying is the ultimate “prize” for regime change, now that Trump is directly bombing Assad’s forces.
Weeks ago, Trump’s defense secretary James Mattis was reportedly planning a brazen and incredibly dangerous operation to board Iranian ships in international waters. This would have effectively been an act of war. Apparently, the only reason the Trump administration didn’t carry it out was because the plan leaked and they were forced to scuttle it – at least temporarily. But that hasn’t stopped the ratcheting up of tensions towards Iran ever since he took office.
On top of all this madness, 16 years after America’s longest war in history started, a top general has already testified to Congress that the military wants more troops in Afghanistan to break the “stalemate” there. Well before the end of the Trump administration, there will be troops fighting and dying in Afghanistan who weren’t even born when the 9/11 attacks occurred.

To further shield the public from these decisions, the Trump administration indicated a couple weeks ago they have stopped disclosing even the amount of additional troops that they are sending overseas to fight. The numbers were already being downplayed by the Obama administration and received little attention as the numbers continually creeped up over the last two years. Now, the public will have virtually no insight into what its military is doing in those countries.

It should go without saying that Bashar al-Assad is a monster and a butcher and the people of Syria have suffered incredibly over the past five years. North Korea is potentially dangerous and unpredictable, and Iran is far from innocent on the world stage. But the idea that starting or expanding wars against these countries is going to solve anything belies the last 15 years of history, where the US has intervened and overthrown leaders in country after country, only to cause even more chaos and destruction, with trillions of dollars and millions of lives lost.

With several conflicts likely brewing with countries that have significant military power, the Trump administration is putting the US – and the world – on a potentially catastrophic collision course. And so far, pushback from politicians, the media and anyone else with influence in Washington has barely been seen.