You might never see a more powerful, stunning production of Eugene O'Neill's "The Hairy Ape" than this one directed by Richard Jones and starring Bobby Cannavale at the Park Avenue Armory. This is a play about class, and class consciousness. 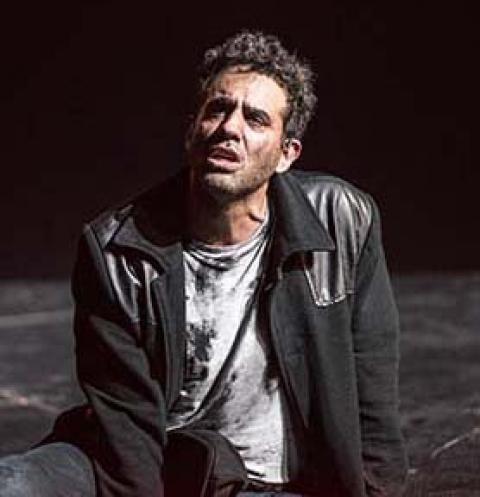 Bobby Cannavale as Yank, in Eugene O'Neill's, "The Hairy Ape"., photo Stephanie Berger // The Komisar Scoop
It's a very early O'Neill work, first produced in 1922, a time of radical ferment in the U.S., and it is imbued with the young man's poetic and fierce attack on capitalist exploitation of workers and the inequality that engenders. Which makes it a very modern play as well.
O'Neill had a friend who was a stoker/fireman on a ship. He committed suicide by throwing himself overboard. That inspired the playwright to write this work. Its fury is palpitating. Its working-class dialect speaks in his voice.
Artistically, under Jones' startling direction, it is a combination of realism and expressionism, which turns into super naturalism.

Stokers in the choreography of work.
photo Stephanie Berger // The Komisar Scoop
There's a moving circular stage that brings characters onto the very large armory space. We see people in a long yellow box come to life. It is a ship's furnace room. They are drinking, they stop, they move, they freeze, then blackened faces yell "beer, glorious beer."
They are the stokers that feed the fire that moves the giant vessel. It's brutally tough and hot. And for Yank (the mesmerizing Bobby Cannavale), it is home.
Long (the very good Chris Bannow), the leftist, tells them, this stinking ship is hell comrades. All men born free and equal. In his dialect: "Listen 'ere, Comrades! Yank 'ere is right. 'E says this 'ere stinkin' ship is our 'ome. And 'e says as 'ome is 'ell. And 'e's right! This is 'ell. We lives in 'ell, Comrades-and right enough we'll die in it. (Raging.) And who's ter blame, I arsks yer? We ain't. We wasn't born this rotten way. All men is born free and ekal." 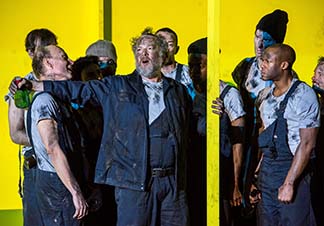 David Costabile as Paddy talking about old times.
photo Stephanie Berger // The Komisar Scoop
It is O'Neill's political cry.
An old guy, Paddy (a fine David Costabile), talks about thinking and dreaming. And the past. "Twas them days a ship was part of the sea, and a man was part of a ship, and the sea joined all together and made it one"
"(Scornfully.) Is it one wid this you'd be, Yank-black smoke from the funnels smudging the sea, smudging the decks-the bloody engines pounding and throbbing and shaking-wid divil a sight of sun or a breath of clean air-choking our lungs wid coal dust-breaking our backs and hearts in the hell of the stokehole-feeding the bloody furnace-feeding our lives along wid the coal, I'm thinking-caged in by steel from a sight of the sky like bloody apes in the Zoo!" 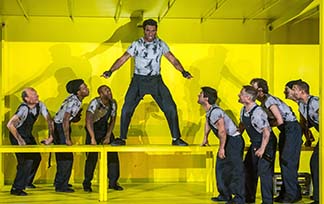 Bobby Cannavale as Yank telling the men `I belong.
photo Stephanie Berger // The Komisar Scoop
But Yank doesn't buy it, doesn't buy "the crazy trip about stars and fresh air." Because he "belongs." And "what's thinking got to do with it?"
Then he confronts the real world above the deck in the person of Mildred Douglas (Catherine Combs) the daughter of the millionaire who owns a steel mill and is chairman of the board of the shipping line. She is traveling with her aunt (a very strong Becky Ann Baker). She is a do-gooder, and wants to discover how the other half lives, to be some use in the world. Her aunt accuses, "Poser!"
A ship's officer takes her below decks to the furnaces. 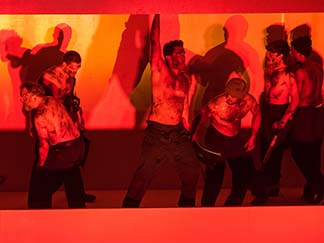 Bobby Cannavale as Yank and fellow stokers shovel coal in ship's furnace.
photo Stephanie Berger // The Komisar Scoop
In Mimi Jordan Sherin's vivid lighting, the yellow of the stokers' box turns to green, then red when the furnace doors open and they shovel in the coal. Director Jones shows the men as animals. Yank exults "we belong."
But when Mildred sees Yank through the door, she screams, "Oh, the filthy beast," and she faints.
So, this is a play about class, and class consciousness. Mildred says she wants to see the animals below the decks. In a furious response, Yank hangs from the ceiling and kicks its low roof. "I belong, she don't. She's only baggage." "I scared her? Why de hell should I scare her? Who de hell is she? Ain't she de same as me? Hairy ape, huh?"
"(With his old confident bravado.) I'll show her I'm better'n her, if she on'y knew it. I belong and she don't, see! I move and she's dead! Twenty-five knots a hour, dats me! Dat carries her but I make dat. She's on'y baggage. Sure!"
He will get off the ship in New York and walk up Fifth Avenue seeking to find her. He asks Long, "Where's all de white-collar stiffs yuh said was here-and de skoits-her kind?" 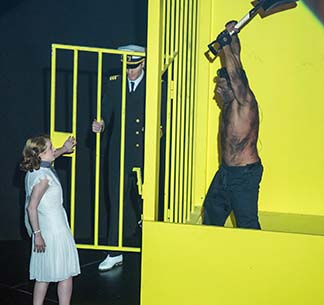 Catherine Combs as Mildred sees Bobby Cannavale as Yank holding shovel in threatening way.
photo Stephanie Berger // The Komisar Scoop
Long says, "In church, blarst 'em! Arskin' Jesus to give 'em more money." He says, "Yer been lookin' at this 'ere 'ole affair wrong. Yer been actin' an' talkin' 's if it was all a bleedin' personal matter between yer and that bloody cow. I wants to convince yer she was on'y a representative of 'er clarss. I wants to awaken yer bloody clarss consciousness. Then yer'll see it's 'er clarss yer've got to fight, not 'er alone. There's a 'ole mob of 'em like 'er, Gawd blind 'em!" 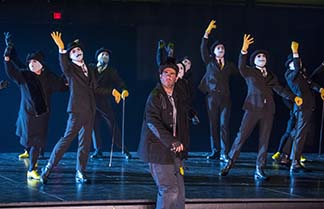 Bobby Cannavale as Yank and the rich in their white masks.
photo Stephanie Berger // The Komisar Scoop
Jones has a troop of the privileged as dancers in a pageant arriving, faces covered by white masks. Yank attacks one and get beaten up. In a jail cage, he is advised by a guy in the next cell to join the IWW, the Industrial Workers of the World, the Wobblies.
The guy has a newspaper and reads an article quoting a U.S. Senator, "There is a menace existing in this country to-day which threatens the vitals of our fair Republic..The I. W. W. must be destroyed! For they represent an ever-present dagger pointed at the heart of the greatest nation the world has ever known, where all men are born free and equal, with equal opportunities to all, where the Founding Fathers have guaranteed to each one happiness, where Truth, Honor, Liberty, Justice, and the Brotherhood of Man are a religion absorbed with one's mother's milk, taught at our father's knee, sealed, signed, and stamped upon in the glorious Constitution of these United States!"
The men in the lock-up react with hisses, catcalls, boos, and hard laughter. Yank is beginning to understand: "Cages, cells, locks, bolts, bars-dat's what it means!-holdin' me down wit him at de top!" He will understand that "belonging" to the oppressed proletariat doesn't count for much in the real world. 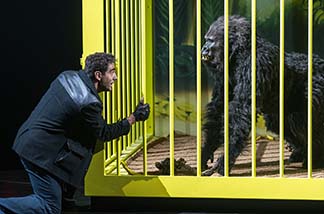 Bobby Cannavale as Yank, and a zoo gorilla.
photo Stephanie Berger // The Komisar Scoop
So, more will come, Yank's attempt at revenge, failure to connect with suspicious IWW people who think he's a Pinkerton, and a sense of workers' inability to organize when we see them walking slowly in a choreographed scene with yellow lunch boxes and hard hats while three drunk rich kids gambol among them. And the dénouement indeed includes a hairy ape in a cage eerily like the stokers' workplace.
Cannavale is powerful, astonishing in the production, which he carries. The other players are also very fine. Director Jones' mixing a magical realism with the realistic script is a brilliant choice, making the play aesthetically fascinating as well as important in its point of view. I've never seen a tougher, more emotionally gripping and riveting staging of O'Neill's "The Hairy Ape."
"The Hairy Ape." Written by Eugene O'Neill, directed by Richard Jones. Park Avenue Armory, Park Avenue at 66th Street, New York. 212-933-5812. Opened March 30, 2017, closes April 22, 2017.