Early results place left-wing candidate Jean-Luc Mélenchon third, behind Macron and Le Pen. But his campaign, under the banner of France Insoumise, has succeeded in shifting the debate in France’s presidential election to the Left, forcing discussion of democracy and redistribution into a terrain previously dominated by the Right. What does it mean for France’s left? 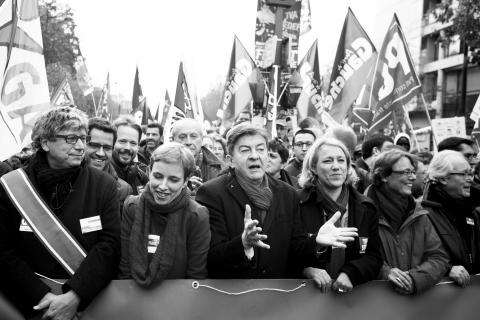 France voted in the first round of its presidential election today with left-wing candidate Jean-Luc Mélenchon a viable contender in a four-way race following a meteoric rise in recent weeks. Early results place him third, behind Macron and Le Pen.

But his campaign, under the banner of France Insoumise, has succeeded in shifting the debate in France’s presidential election to the Left, forcing discussion of democracy and redistribution into a terrain previously dominated by the Right.

But why has Mélenchon been successful — and what does it mean for France’s left? Jacobin contributor David Broder speaks with Paris-based councilor Clémentine Autain, a spokesperson of Ensemble!, about the conclusion of the campaign and the next steps.

On Thursday night, as the candidates were appearing in their final election debate, there was a terrorist attack in Paris. The story dominated the last day of campaigning. What impact do you think it will have?

There was a terrorist attack during the regional elections in 2015, a number of weeks before the first round vote, and in the days that followed the attack pollsters saw a rise in support for the far-right Front National. So it’s plausible that this type of event will be to the benefit of the most securitarian, Islamophobic politics, and those who propose to undermine civil liberties. They might profit from fear. At the same time, it is difficult to anticipate exactly. We are in an election period that has been very uncertain since the outset, with constant unforeseen developments, and in which the scripts that were written in advance are constantly being proven wrong. So from that point of view I can’t predict what the consequence will be. But the stance Jean-Luc Mélenchon has taken is to say that faced with this type of attack we have to reassert democracy. This is a stance in favor of a human presence, through public service, through intelligence and community policing but also through education and culture, which can also be a rampart against terrorism.

Many expected a campaign focused on terrorism, security and radical Islam. But it hasn’t played out that way. Would you agree that Marine Le Pen has struggled to make these issues central?

Yes, I think Marine Le Pen failed in this respect. She too had expected that the election would be focused on questions of identity, the fight against terrorism, and the debate on security. But we have managed to force other questions onto the agenda, and in particular, we have succeeded in placing the fight against unemployment and social inequalities at the heart of the public debate. That is one of the reasons for Jean-Luc Mélenchon’s breakthrough.

How would you explain Mélenchon’s rise in recent weeks?

Since Mélenchon’s 2012 campaign he has maintained his call for a different way, a path of social transformation totally separate from the Hollande-Valls government. He has not budged on this point, and he has not agreed to any kind of discussion with the Parti Socialiste. He has not allowed for unity with a Left which is not really left-wing. I think the fact that he has been consistent in this has been an important element of his success.

In France, we are in a moment of great disruption right now. The two big political formations – the Republicans and the Socialists – are in a state of collapse. So we have a highly unsettled political terrain, and a government that has carried out a right-wing policy in the name of the Left. French people find themselves without clear bearings. In this context, Jean-Luc Mélenchon represented a reference point, a point of continuity. Seeing as the debate was not focused on identity, securitarian policies and so on, people were listening and they heard his discourse.

Evidently, there is also his personal talent, including as an orator. People in France recognize that his discourse raises the level of political debate. It is cultured and anchored in history. He uses words in a very rich way. That makes him a political interpreter of high quality, and it is clear that that has also had an effect.

What do you think comes next for the Parti Socialiste? Can it survive?

There has been an incredible explosion in the Parti Socialiste. Mélenchon has managed to pick up some of the debris, which has been a major contributor to his success. We will see if that will last. I do not believe it can survive in its current form. I think a social-democratic current could hang on. I do not believe that will disappear completely. But for the party’s right-wing, if Macron is elected, some of their politicians will rally to him. It remains to be seen what they will do if it is a second round of Fillon against Le Pen.

Do you think the Socialist electorate that voted for Hollande in 2012 will be won over to Macron’s platform? Does he benefit from a vote utile[a pragmatic vote]?

Part of the Socialist electorate has gone with him, that much is clear. But another part considers that the ‘vote utile’ now is Jean-Luc Mélenchon. He has become the pragmatic choice on the Left, particularly among those who voted for François Hollande but do not identify with the policy that he actually implemented. The other option is Benoît Hamon, who finds himself caught in this bind: on the one hand is Macron, who best represents the perpetuation of the system, and on the other hand is Mélenchon, who offers another way, a left-wing break. Hamon thought that his strength was adopting a position in the center of the left – but in reality what is happening is that he is caught in no-man’s land. There are two major orientations, incarnated respectively by Emmanuel Macron and by Jean-Luc Mélenchon. Understanding this from the outset, Mélenchon has waged a campaign to give substance to his position.

One of the reasons for his success, which is also worth noting, is that while before he had a strategy focused on bringing together a coalition of left-wing forces – which is we did with the Front de Gauche, which was based on bringing together Left organisations – and filling in the substance of the word ‘Left’, for this election he has changed strategy. He has abandoned the word ‘Left’, but he has filled in the content of that word with a political proposal. He took account of the fact that waving around the word ‘Left’ had become confusing, because people thought that the ‘Left’ was the government. So it was more effective to work without that word.  But he has asserted the values and the proposals of the Left far more effectively than before. Add to that the fact that there has been a crisis of political parties, and that political parties are no longer popular. So he created France Insoumise on the basis of a break with political parties. And that seems to have worked.

Do you think his campaign has given encouragement to the broader Left, something which might last beyond the election itself?

I think that the result of the presidential election will decide a lot of things in terms of the dynamic of the movements that follow. Even if Mélenchon does not win the election, or is not in the second round, I still think that he has laid down an important landmark for the recomposition of the Left in France. And of course this also impacts people’s morale, their determination, and that can spill over into the social movements.

Do you think France Insoumise has a future even if he does not win the presidency?

I do not know what Jean-Luc Mélenchon’s own political proposal is going to be. The France Insoumise movement is the instrument of this election campaign, but I do not know what he is going to suggest afterwards in terms of giving structure to a lasting political movement that is not simply attached to a candidate standing for the presidential election. We are going to have to get stuck into some practical work on that score. And I think that there needs to be a constituent process, like the one he proposes for France, for the creation of a new political force, a Left that stands for social and ecological transformation.

What does this mean for the Front de Gauche and for Ensemble!, your group within it?

Ensemble! wants to be an agent of unity, an agent for bringing different forces, currents and sensibilities on the Left together towards a real transformation. That is even more important given that questions are now going to be posed to certain ecologist forces and some of the currents coming out of the Socialist Party, who have supported Hamon’s campaign. In the constituent process, in the formation of a new political force, Ensemble! will contribute to the necessary task of bringing different currents together. But Jean-Luc Mélenchon has succeeded in creating a militant citizen dynamic that is not necessarily linked to political parties, and we will also have to keep that dynamic going. That is more difficult. I have long thought that if we want to build a new force we cannot simply make the best of what was there before, we cannot simply federate together what already exists. We have to succeed in bringing other forces to us who are not already in our camp. Mélenchon has succeeded in doing that; he has managed to inspire the enthusiasm and involvement of people who were never in parties. But there is a question of how we can provide something lasting, to keep them in a common political space in an enduring fashion. Frankly, that is not easy.

It seems that a lot of young people will vote for Mélenchon and France Insoumise this weekend?

Certainly, Mélenchon has expanded his base compared to the 2012 election, particularly among the young as well as among working-class and unemployed voters. And there are a lot of young activists in France Insoumise, a lot more than there were before in the 2012 campaign; among Ensemble! and the French Communist Party, certainly. That is very good news for what comes next.

Clémentine Autain is a spokesperson for Ensemble!, a political grouping within the Front de Gauche. She is a councilor in Île-de-France and co-director of quarterly publication Regards.