Just ‘An Island in the Pacific’: An Enduring Colonial View

U.S. Attorney General Jeff Sessions’ arrogant dismissal of a federal district judge’s ruling against the Trump Administration’s ban on refugees and certain Muslim travelers, because he presides on an “island in the Pacific,” is a reminder of how islands in the Pacific have been colonized, commodified, and militarized. From Hawaii to Okinawa, Pacific islanders are demeaned and their islands relegated to vacation getaways and military outposts for the U.S. empire. 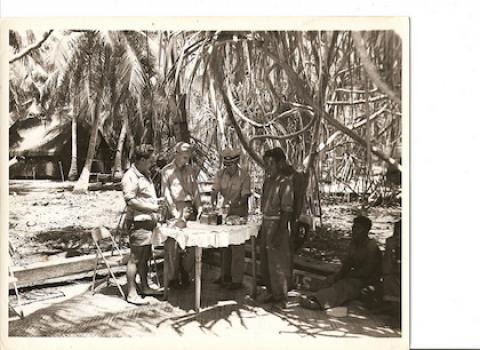 In May 1946 U.S. Navy Commander H. W. Grieve presents relocated Bikini Islanders with melon and squash seeds to plant in their new homeland on Rongerik in the Marshall Islands. They were moved so the U.S. could conduct atomic tests on their island.,Kibbe Museum

Attorney General Jeff Sessions recently earned a news cycle’s worth of negative press after an interview in which he seemed to dismiss the entire state of Hawaii, where a federal judge earlier this year blocked the Trump administration’s ban on refugees and on travelers from six Muslim-majority countries.

“I really am amazed,” Sessions complained, “that a judge sitting on an island in the Pacific can issue an order that stops the president of the United States from what appears to be clearly his statutory and constitutional power.”

Sessions’ comments were widely seen as ignorant and arrogant, dismissing U.S. federal district judge Derrick Watson and the “island in the Pacific” on which he sits. Hawaii’s Senators Mazie Hirono and Brian Schatz were quick to fire back on Twitter, with Schatz reminding Sessions that that island is called Oahu, and it happens to be part of a U.S. state.

The dustup came one day after South Carolina Senator Lindsey Graham made comments which received far less attention. Speaking in a Today Show interview, Graham said that a war on the Korean peninsula would be “bad for China, bad for Japan, bad for South Korea, it’d be the end of North Korea,” but quickly added, “what it would not do is hit America.”

It was as if Graham was saying: Relax! We’re only talking about destruction on a peninsula in the Pacific.

Sessions and Graham’s remarks might have been more shocking if they weren’t preceded by the U.S. president’s own steady stream of outrageous comments — including his latest ally-enraging (and inaccurate) suggestion that Korea was once part of China, and appearing not to know the difference between three generations of North Korea’s Kim dynasty. In Washington, the intellectual and moral bar has been set so low, it’s now in danger of being run over by rats and lemmings.

Truth be told, Sessions, Graham, and Trump hardly hold a monopoly on disrespect and disconnect to the Asia-Pacific. Even those who were quick to blast Sessions’ remarks operate on their own ingrained assumptions about the region.

By their nature, Pacific islands are geographically smaller and distant from continents and have long been seen through the lens of conceit. (Henry Kissinger was famously quoted saying of the Marshall Islands, where the U.S. conducted nuclear testing from 1946 to 1958, “There are only 90,000 people out there. Who gives a damn?”)

It’s why, in part, places like Hawaii, Guam, the Marshall Islands, and Okinawa have been relegated to serve as neverland vacation getaways as well as outposts for our military empire — places to store, stage, test, and train for tomorrow’s wars.

Sessions’ dismissive island in the Pacific comment and Graham’s cavalier admission that a new Korean war would be a disaster for “them” but not “us” (sucks to be you!) cut to the heart of questions of sovereignty and servitude — and why there is so little recognition of the degree to which islands in the Pacific are commodified and militarized.

And while Jeff Sessions surely knows that Hawaii has been a U.S. state since 1959, he and others would do well to remember that the formerly independent Kingdom of Hawaii was, in fact, illegally overthrown by the United States in 1893 — and that Hawaiian legal scholars and others still dispute the validity of the U.S. annexation of Hawaii. The subsequent road to statehood and attendant impacts to Hawaiian culture and society, land rights, and the environment stand out as a glaring example of what can happen to an island in the Pacific when it catches the eye of a great power.

On the other side of the date line, the U.S. territory of Guam is highly valued by the U.S. military as its “unsinkable aircraft carrier” in the Western Pacific, anchored strategically near East Asia. But most Americans would struggle to find it on a map. Guam has one of the highest military enlistment rates in the U.S. but remains divided over its political status.

There’s an effort underway to hold a plebiscite that would address the island’s political status as an “unincorporated territory.” A vote on whether Guam should pursue statehood (like Hawaii), forge a free association with the U.S. (like Micronesia’s three Compact of Free Association nations), or seek full independence would be a significant step toward ending its colonial status and move toward self-governance.

Like Guam and Hawaii, the Republic of the Marshall Islands knows all too well what it means to be an island in the Pacific. The impact of the 67 nuclear weapons tests conducted by the U.S. in the northern atolls (most famously on Bikini) is measured not just in contaminated islands and devastating cancer rates, but in the profound changes to Marshallese culture and society. Entire communities were moved around like furniture to accommodate U.S. weapons tests.

Often overlooked is the Marshall Islands’ Kwajalein atoll, home to the Ronald Reagan Ballistic Missile Defense Test Site, which is so valued by the U.S. that it has negotiated a lease that runs through 2066 (with an option to extend to 2086). Much of the base’s unskilled labor force is made up of Marshallese who live in impoverished, crowded conditions, often lacking the most basic services and utilities, on a tiny sliver of sand called Ebeye island a short boat ride away from America’s sophisticated Death Star in the Pacific.

The widely accepted premise that islands in the Pacific make great military bases extends to southern Japan’s Okinawa prefecture, once the independent Ryukyu Kingdom until it was absorbed by Japan in the 1880s. After the horrific battle of Okinawa at the end of World War II, the U.S. claimed Okinawa as its own — the spoils of war — and occupied it outright until its reversion to Japan in 1972.

Today Okinawa is fractured as its people continue to protest around the clock against the lopsided U.S. military presence there. At least 70 percent of all U.S. bases and half of U.S. troops in Japan are crowded on Okinawa into less than 1 percent of Japanese territory, with new U.S. installations being forcibly built under the heavy fists of Tokyo and Washington.

This denial of how the U.S. disrespects islands extends beyond the Pacific. It’s why Diego Garcia, where the U.S. and British expelled an entire indigenous population to build a U.S. military base, is just an island in the Indian Ocean. It’s why Puerto Rico and Cuba are just islands in the Caribbean.

When geographically and politically dominant nation-states invade, conquer, annex, or otherwise absorb smaller, distant islands, entire populations are displaced, cultures are appropriated or extinguished, and colonization and militarization are normalized.

When Jeff Sessions made his smug comment about an island in the Pacific, he was lambasted for disrespecting Hawaii. But a more subtle, far more pervasive kind of disrespect forms the basis of a narrative so widespread it transcends political boundaries, linking those on the right with those on the left in a way that never seems to make the news.

[Jon Letman is a freelance journalist and photographer based on the Hawaiian island of Kauai.]