“We should have the right to distribute information to our co-workers without intimidation,” said Michael Sanchez, who works on door panels at the factory and has joined the unionizing effort. “You can’t fix problems if you’re not allowed to talk about them.” 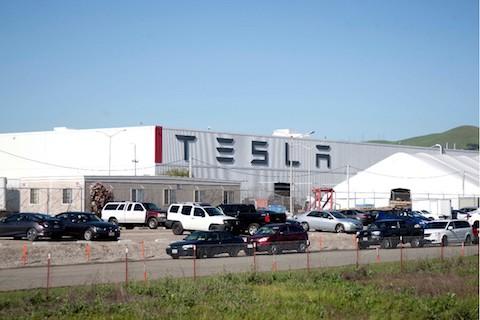 Workers at Tesla’s Fremont, California electric car factory have filed a unfair labor practice charge with the National Labor Relations Board (NLRB), accusing the company of illegal surveillance, coercion, intimidation and prevention of worker communications. The employees, who have been attempting to organize the approximately 7,000 workers at the plant through the United Auto Workers, claim that Tesla violated multiple sections of the National Labor Relations Act, which protects the right to unionize.

“I know my rights, and I know that we acted within them,” said Jonathan Galescu, a body repair technician. Galescu and his colleagues have previously cited low pay, hazardous work conditions and a culture of intimidation as motivations to unionize the plant.

On February 10, several Tesla employees passed out flyers to their colleagues during a shift change. The literature featured a blog post from Medium written by Jose Moran, a Tesla production associate on the body line. Moran’s post was the first public acknowledgment that some workers at Tesla were interested in organizing a union.

According to the NLRB complaint obtained by Capital & Main, managers at Tesla “conduct(ed) surveillance” on the workers who passed out the literature, and those who received the flyers. A month later, on March 23, Tesla management held a meeting, telling workers “they were not allowed to pass out any literature unless it was pre-approved by the Employer,” the complaint reads.

“We should have the right to distribute information to our co-workers without intimidation,” said Michael Sanchez, who works on door panels at the factory and has joined the unionizing effort. “You can’t fix problems if you’re not allowed to talk about them.”

Employees also object in the complaint to a confidentiality agreement  presented last November, which vowed consequences (including “loss of employment” and “possible criminal prosecution”) for speaking publicly or to the media regarding “everything that you work on, learn about or observe in your work about Tesla” – including wages and working conditions. Confidentiality agreements are common in auto factories to protect trade secrets, but Tesla’s was so far-reaching that five members of the California legislature wrote to the company, warning that the agreement violated protected employee activity.

Nearly 60 organizations, most from the Bay Area, also recently wrote to Tesla CEO Elon Musk, demanding that the company loosen the confidentiality policy. Now, the employees charge that the policy violates the law.

“This confidentiality agreement is clearly in violation of the Wagner Act and recent NLRB rulings,” said labor historian Nelson Lichtenstein of the University of California, Santa Barbara. “The prohibition about discussing one’s work would make it impossible to engage in freedom of assembly and communication with others seeking to engage in concerted activities protected by labor law.” The prohibitions remain in place even if the employee is no longer working at Tesla, which Lichtenstein called “arrogance personified.”

Tesla spokesman Dave Arnold did not respond to a request for comment about the NLRB filing.

The NLRB’s regional office in Oakland has been assigned to gather evidence and take affidavits about the charge. Typically the process takes seven to 12 weeks. If the agency finds enough evidence to support the charge, it can facilitate a settlement or elevate the case to an administrative law judge, who mandates informational postings at the facility. If the charges are deemed serious enough, the agency can seek an injunction in federal court. The NLRB cannot issue monetary penalties in this kind of proceeding.

The filing of charges reflects growing labor tensions for Tesla. CEO Musk has thus far resisted efforts to allow a union at the Fremont plant, saying “there are really only disadvantages for someone to want the UAW here.” Furthermore, Tesla faces a possible strike at its robotics factory in Germany.

Unrest could very well grow in Fremont as Tesla looks to ramp up auto production with the introduction of the Model 3, going from approximately 100,000 cars per year to 500,000.

Tesla’s market capitalization recently passed Ford and General Motors, making it America’s most valuable auto company. But the Fremont plant is the only stateside factory owned by a U.S. automaker that uses non-union workers.

“I’m hopeful that the company will take a more positive view of workers’ opinions and feedback, and that management and workers can improve company processes – and safety – by working together,” said Fremont employee Galescu.