Bad Dictators are arguably Bad, and some are war criminals. But Washington tends to deal with the pro-American dictators by just not bringing them up much. 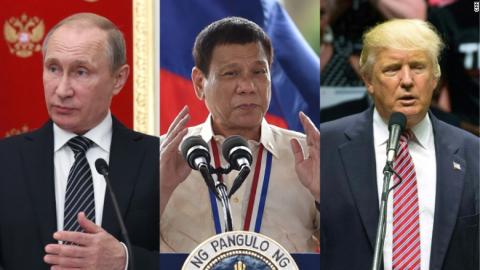 , True Viral News
Donald J. Trump’s peculiar comments about and relationship with dictators and loonies among foreign leaders have upset a range of observers, from sincere human rights activists to cold-blooded Think Tank Rats. First he welcomed the Philippines’ demagogue and possibly cold-blooded murderer Rodrigo Duterte to Washington. Then he said he understood the problems North Korea’s Kim Jong Un had battling off his bloodthirsty relatives.
But I would argue that the inside-the-Beltway Blob is mainly upset because Trump doesn’t seem to know the difference between the Bad dictators, whom you diss, and the Good dictators, whom you praise as strong allies. Trump just seems to like all the dictators.
Washington wants Trump to talk dirty about Vladimir Putin of Russia, Kim Jong Un of North Korea, and Nicolás Maduro of Venezuela. (Two of the three were elected and Putin seems genuinely popular). But the Establishment is fine with him praising Abdel Fattah al-Sisi of Egypt (Sisi strong-armed opponents into not running against him, intimidated the press, declared a major party a terrorist organization and killed hundreds of them, and won office with a shameful 97% of the vote).
No one in Washington stands up and gives speeches criticizing Thailand’s repressive military junta. And the US Establishment was positively giddy when the corrupt Brazilian oligarchy impeached the elected president of Brazil and replaced her with a corrupt Brazilian oligarch. We haven’t heard anything more about either Brasilia or Bangkok on television news. Move along, nothing to see here.
Saudi Arabia would be too easy a subject here.
You’ve heard less about Salva Kiir Mayardit of South Sudan, who helped plunge his country into a deadly civil war and wreck millions of lives. Why, South Sudan was a US project, aimed at breaking up and weakening Arab Sudan. Sudan’s dictator, Omar al-Bashir is in the Washington dog house as Bad Dictator. Kiir Mayardit isn’t brought up.
The Bad Dictators are arguably Bad, and some are war criminals. But Washington tends to deal with the pro-American dictators by just not bringing them up much, or by stressing their friendliness rather than their rapaciousness when they are brought up.
Some of those Washington sees as Bad Dictators, however, are either not dictators or not bad, or not either one. Evo Morales of Bolivia was called “Taliban” by W.’s ambassador, presumably because he represents workers and the indigenous population rather than big business. I’m not aware that anyone has suggested he hasn’t been fairly elected, and he has been a good steward of the economy for workers and the middle classes.
Then of course above all you’re not allowed to bring up that Israeli Prime Minister Binyamin Netanyahu rules millions of Palestinians by military force, keeping them occupied and stateless and stealing their land while depriving them of the most basic human and civil rights. No Palestinian was allowed to vote for or against Netanyahu even though he rules them with an iron fist.
So get this. Evo Morales Bad, Netanyahu Good.
Nor is this a new phenomenon. Gen. Franco of Spain was at least informally part of the Axis, but by the 1950s Washington had rehabilitated him as an ally. We never heard about Franco’s crimes against humanity or embarrassing Fascism when I was growing up in the 1950s and 1960s, but Communist leaders were constantly vilified. One’s attitude toward Capital seems to have mattered more than human rights considerations.
Is it as simple as American billionaires feeling threatened by some dictators but not by others, and instructing the US government accordingly? Be a popularly elected politician who talks socialism, and anything less than a perfect human rights record becomes a headline. Be a coup-maker who welcomes the foreign billionaires in to exploit your people, and you can sodomize prisoners of conscience with broomsticks all you like, and Washington won’t so much as cough politely in disapproval.
What the erratic Trump is doing in sucking up to people like Duterte is horrifying. But just keep in mind that he and his predecessors sucked up to people just as bad or worse, and it was never a headline if those dictators remained compliant with the wishes of America’s Chamber of Commerce.