This Woman May Be the First Black Female Governor

Stacey Abrams, Georgia’s state house minority leader, hopes to make history – and her track record shows that pushing boundaries is what she does best 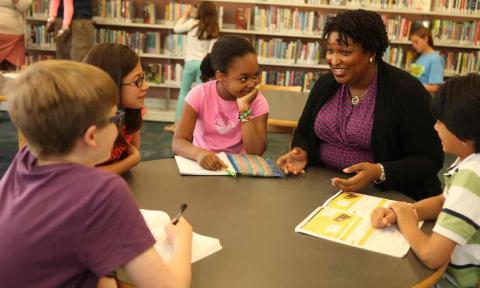 The Democratic leader in the state capitol these last seven years, Abrams has long signaled her interest in running for the state’s highest office – and on Tuesday she finally filed paperwork, the first formal step in entering the race.

The contest to replace the outgoing Republican governor, Nathan Deal, is wide open. Three Republican candidates have already announced, but as a longtime Democratic leader (she was elected to the state house of representatives in 2006 and became the minority party’s leader in 2011), as well as a rising star on the national stage, the move marks her as the highest-profile Democrat in the field.

Abrams is hoping to harness some of the anti-Trump backlash that boosted her fellow Democrat Jon Ossoff in the first round of a special election for the US House of Representatives last month, though in a recent interview with the Guardian, she framed her mission differently. A former bureaucrat, district attorney and businesswoman, Abrams is hoping her diverse political background will be a selling point.

“We need good politicians who actually respect government and understand how all the different pieces work to run,” she said. “And you need former bureaucrats because we understand what these laws look like in practice.”

But that doesn’t faze Abrams, who says demography is not destiny. “I am a bullish cheerleader in the reality that demography is a roadmap but not a treasure map,” she says.

For Abrams, that means investing in voter turnout efforts to help enfranchise more Americans down the road. “Organizing means changing behavior and changing behavior is hard,” she says. But, she adds, “changing ideology is harder”.

Abrams, whose parents are ministers, reaches for a religious metaphor.

“We spend a lot of time trying to convince atheists to be Catholics rather than just getting Baptists to go to church,” she says. “For many people who don’t vote, they don’t vote because they don’t see what’s in it for them.”

It’s a national problem, but one that’s specifically visible in Georgia.

And Abrams wants voters to know that, the way she’d do things, there is something in government for them, and it starts with everyone showing up to vote.

"For many people who don’t vote, they don’t because they don’t see what’s in it for them"
Stacey Abrams

Running for governor anywhere while black and female is no easy feat. But to consider such a bid in the context of Abrams’ life is to realize that for her, it’s not quite the long shot it might seem.

She was the first African American valedictorian in memory at Avondale high school, the magnet school in Georgia she attended; the first person in her family to buy a house; the first in her family to become a lawyer; the youngest deputy city attorney in Atlanta, according to the mayor who hired her.

When she became the minority leader in the Georgia state house, no woman or person of color had ever held that job in its 200-some years. And were she to be elected to the governor’s mansion, Abrams would be the first African American female governor in American history.

One of six children born to Methodist ministers in Mississippi who later followed their work to Georgia, Abrams’ family struggled to fight off poverty, relying at times on government assistance. For Abrams, this underscored that government at its best is a form of people taking care of each other – as families do, just scaled up.

An immensely capable student at Avondale and Spelman College in Atlanta, she was hired as a typist for a congressional campaign in high school, where her tweaks to a campaign speech she was typing up were deemed so good she ended up being hired as a speechwriter at 17.

When the Rodney King riots happened during her second year of college in 1992, and large swaths of campus were shut down or teargassed, she led student activism and took part in a televised debate with the then mayor, Maynard Jackson, in which she told the young mayor he wasn’t doing enough for young people. Though that did not go over well initially, within six months she’d been offered a job with youth services in the mayor’s office.

She followed that job with an internship at the EPA, grad school and working for a community development bank, a stint with the White House’s office of management and budget, then Yale Law School. After graduating, she worked as a tax attorney at the Sutherland law firm, before moving back toward government in her role as deputy city attorney of Atlanta.

First elected to the Georgia house of representatives in 2006, she worked her way up to house minority leader by 2010. In the role, she has been working on education, economic wellbeing, and expanding access to Medicaid. In recent years, Abrams has also developed a national profile, evidenced in a cameo appearance last summer at the Democratic national convention in Philadelphia.

This was not a path that anything in her circumstances could have predicted but in a way, Abrams’ entire life has been a study in the art of expanding the possible. Other female governors have taken notice. “She’s got something special,” Jennifer Granholm, the first female governor of Michigan, told the Guardian. “She has a real mixture both of ideas, of really good guts, and of the ability to raise the funds necessary to execute the ideas. Granholm cited in particular the work she had done in training rural Georgians to sign up for the Affordable Care Act, and more recently the push she has made on Medicaid expansion.

“She’s really been able to harness her brains and her heart and her past experience in a way that gives people hope in Georgia,” Granholm added.

Since Granholm’s tenure in office, the number of female governors has dropped from eight to the current six.

One of them is Kate Brown, governor of Oregon, who has also praised Abrams as an innovator who would make a formidable candidate. “Stacey and I have talked about her experience as the child of two hardworking parents who often struggled to make ends meet,” said Brown, one of just two female sitting Democratic governors. “She knows firsthand how opportunity is too often tied to a person’s race, gender and zip code. We need more people like Stacey in public office.”

That’s something at the heart of Abrams’ work these past few years in Georgia, which has revolved around efforts to get out the vote. In 2014 she led the New Georgia Project, a voter registration drive that helped an estimated 200,000 voters, primarily blacks and other minorities, get registered. Any gubernatorial bid of hers is expected to emphasize similar themes.

“I always say that if you’re not at the leadership table, then expect to be on the menu. Public policy decisions are best when all communities are represented at the table where decisions are made,” said Brown.

Granholm is optimistic about Abrams’ chances. “There’s been this huge uprising, a surge of people who are willing to raise their hand and run for office,” she said of the present political climate. “And of course the efforts at voter suppression that have occurred around the country have inspired a determination on the part of people who felt like they’ve been targeted. I think Donald Trump has inadvertently caused an increase in interest in participation in democracy and that perhaps is the only silver lining I can find with his presidency.”

For Jessica Byrd, founder of the consulting firm Three Point Strategies, and the leader of Democracy in Color, a multimedia platform for building a more inclusive Democratic party, Abrams being in a position to run at all feels symbolic of what is possible as well as of what the US’s political future should look like. “In so many ways, the system wasn’t designed to be led by someone who looks like her,” Byrd said. “Her background being a preacher’s kid and identifying as a black woman is really exciting because it’s still so new.”

Lucia Graves is a Guardian US columnist. She was previously a staff correspondent for National Journal magazine and a staff reporter at Huffington Post. Follow her on Twitter.

The Guardian’s independent, investigative journalism takes a lot of time, money and hard work to produce. Become a supporter. Make a contribution.