Mantell Stevens is an activist, organizer, speaker, and lobbyist with Kentuckians for the Commonwealth, a grassroots social justice organization working on a number of issues, including ending Kentucky’s policy of lifetime disenfranchisement. Kentucky is one of only three states that continue to impose lifetime disenfranchisement, permanently barring citizens from the ballot box as a consequence for any felony conviction. 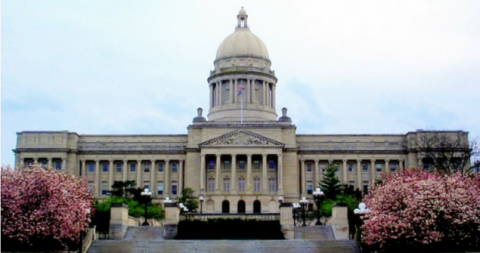 Kentucky State Capitol, Peter Alexander
We spoke with Stevens about his work, his life, and how they have come to influence each other. Our conversation appears below, edited to account for space constraints.

Could you tell us a bit about yourself, and how you became involved with efforts to restore voting rights?

I’m 38 and I was born and raised in Lexington, Kentucky. Around the time that I was between 18 and 20 years old, I got involved with selling drugs and got my first felony. I didn’t really know the consequences at the time. Yes, I was an adult, and I knew right from wrong. But as far as long-term consequences, I wasn’t aware – and my public defender didn’t advise me of all of my options – so I pleaded to the felony charge. And, in a lot of ways, I was blindsided by that felony.

In the last couple of years, it’s been a struggle looking for employment, going to school, and getting grants and scholarships to go to school. Life is hard for convicted felons. I can name ten people off the top of my head who are in the same situation. We have past felony convictions that are so old – these convictions happened when we were kids. Basically, my current situation is living in poverty because I don’t have same the resources available to me as people who haven’t been convicted of a felony.

About twenty years after I was out of the system, I decided to participate in a reentry program because I needed to find a job. It was frustrating to have to go through that process, because I had all of the skills and knowledge that I needed to get a job – I just needed that resource to help me actually find one. Through that program, I met Tayna Fogle, who had a program with the prospect for a really good job, in exchange for people attending a county council meeting about a resolution for the restoration of rights. And basically, once I went to that meeting and they passed the resolution, that’s when the lightbulb went off. It just hit me that I needed to be somehow involved in this process, because there were a lot of people at that meeting who were standing up and fighting for my right to vote. And immediately I just kind of felt obligated to get involved. That’s how I linked up with Kentuckians for the Commonwealth.

Now, even though life is a little hectic, I take every opportunity I can to share my story and bring awareness about the importance of the restoration of voting rights. It’s something I’m really passionate about doing, because it’s so important.

Why is the right to vote important to you?

Right now, Kentucky’s process for voting rights restoration requires a lengthy application. As I said, life for a convicted felon can be hectic, and the current process is very discouraging. On top of trying to make a decent living, and basically just survive – people have to navigate this process that’s not clear. It’s a deterrent. There’s no centralized repository for information about the application process – there’s no number that you can call to get all of the information that you need.

Now, everybody has problems – convicted felon or not – but it’s just so much harder for a convicted felon because you’re already at a disadvantage. And it can be almost a feeling of hopelessness, and through that it takes a certain type of person to be able to say ‘no matter what I’m going through in life right now – I need to participate in our democracy.’

In November 2015, then-Gov. Steve Beshear issued an executive order restoring voting rights to Kentuckians who had fully completed sentences for past criminal convictions. What was your reaction when you heard that news?

First and foremost, that was awesome that he did that. It just re-energized me and demonstrated that people really do care about voting rights restoration. And it wasn’t just about having the right to vote, but also the empowerment that came along with that. It’s really hard to describe the feeling – but it was almost like acceptance. People always say, ‘you do the crime; you do the time; you pay your dues to society.’ But that has never been true, in my experience. But at least in that moment, it was a feeling of acceptance – it was society saying ‘you made a mistake, you paid for it – and now you can be just like everybody else: you can participate.’

But less than a month later, in December 2015, Gov. Matt Bevin took office and rescinded Beshear’s rights restoration executive order. What is your take on that?

Why would somebody not want to make the voting rights restoration process easier? It infuriated me. It’s basically saying there’s a whole class of people who we want to prevent from participating. We need to progress, we need to move on – everybody needs the right to vote and to be able to participate in our elections.

How do you see the issue of rights restoration fitting in with our society’s treatment of people with past convictions, generally?

The resistance to restoring voting rights lets me know that we’re a threat. There have been recent reforms in Kentucky, including Bevin’s 'ban the box' order and the Senate’s criminal justice reform legislation, but the voting rights issue is stagnant. It lets me know that some people are in fear of the power that we could have once we have the right to vote.

While other aspects of criminal justice reform are taking a step in the right direction, Bevin has moved backwards on voting rights. I don’t understand it. It’s as if people who have past convictions – we’re finally being accepted, except for the main and most fundamental part of being a citizen – which is the right to vote.

What strategies are most useful in advocacy efforts around voting rights restoration?

The most useful strategy is definitely getting eligible people registered and to the polls, as well as motivating and pushing former felons to at least get started in the current rights restoration application process.

For me, after filing paperwork for restoration under Beshear’s rules, I still haven’t applied again under Bevin’s application. To be honest, I got discouraged. Life started happening, and I have to take time out to actually do that application. And when you do take the time out to do that – and you try to get the information you need, you get into a loop. One person won’t know what they’re talking about – and so they direct you to another department, and on and on. There needs to be a push to get people educated about this process and to motivate them to go ahead and apply. Because the first thing that the Governor does when rights restoration is brought up is claim that nobody is applying, so nobody wants to vote. And I think that’s an argument used by the majority of people who are opposed to the restoration of voting rights – they claim that there’s a current process, but nobody’s moving forward on it, so they must not want to vote that badly. But that is not the truth.

What do you see as the most challenging aspect of the advocacy efforts to change Kentucky’s disenfranchisement policy?

The most challenging aspect is actually convincing current legislators. At least from my experience, when I go and talk to them personally, they already have a preset notion. Basically, there’s that little story that ‘you knew what you were doing when you did the crime, so you got what you deserved.’ That’s what I hear from a lot of people who oppose voting rights restoration. So the work is to change that attitude, and convince them that people change – and people change for the better.

To do that, I make it rhetorical and shoot it back at them. Everyone has screwed up in life – everyone has done something they’re not supposed to do. That doesn’t make you a bad person. And so my attempt is to make people look in the mirror and realize that we’re all people and everybody makes mistakes. We have to move on, we have to progress. We’re just asking for the right to vote. How can that be dangerous? It’s the right to vote and it’s the right thing to do. That’s what our country is built on. I don’t understand why anybody would say, ‘you can be a citizen and you can pay taxes, but you can’t participate in democracy.’

How do you keep yourself engaged, despite setbacks?

It’s hard – I mean, oh my God, it’s just so hard. Sometimes I think, ‘wow, do I really have time to dedicate today?’ And I remember that, yes, I do – because it’s important. And I think about the younger generation. We have to get the ball rolling, because even if reform is not going to happen anytime soon, it needs to happen at some point. Nothing will get accomplished if I idly sit by, and don’t do anything to be a part of the push to make this change. I don’t have any kids, but I have nieces and nephews – and I want them to live in a world where they have the freedom to choose their school officials, their city council members, their police commissioners – the people who have the power to change things in their community. If there’s stuff going on in your community, in your neighborhood, that you don’t like, then you need to be able to choose the people that have the power to change that – to vote for those people and put them in office.

In what ways can people both in and out of the state support your work?

Definitely – for the people that live in Kentucky, exercise their right to vote. And my responsibility is to educate people on the importance of state and local elections. There needs to be more education, because when I connect the dots for somebody as far as local and state government, they realize they really do care about this stuff – they say ‘my kid goes to school, so yeah, I do need to be voting for this person.’ And that’s what I see happening a lot – that’s when a lot of people’s lightbulb goes off – is when they find that connection and they see that voting is important because it affects what’s around them.

For people who don’t live in Kentucky, their role is putting pressure on legislators – to take a stand that this is the right thing to do. On a federal level, we should be saying ‘once you have done your time, you need to be redeemed.’ That’s what I would like to see on a national level – more awareness. Why anybody would want to suppress somebody’s right to vote, maybe it’s not meant for me to understand – but people just need to do the right thing.

Erin Kelley is a Research and Program Associate in the Democracy Program, where she focuses on voting rights and elections. Prior to joining the Brennan Center, Erin interned at the Rhode Island Center for Justice, supporting their work fighting unjust utility terminations. She also interned at the Ittleson Foundation and at Harvard Law School’s Office of Public Interest Advising. She graduated from Brown University in 2015 with a B.A. in Environmental Studies.