film School for Struggle - "The Activists: War, Peace, and Politics in the Streets"

The story of activists who opposed the wars in Iraq and Afghanistan, including their lives, the tactics they used, and the historical context. ‘The Activists,’ explores lessons the anti-war movement has to offer people fighting Trump today. 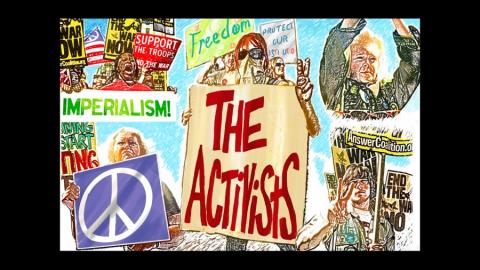 "The Activists: War, Peace, and Politics in the Streets" ,

Efforts to halt the continuing wars in Iraq and Afghanistan that reached their zenith in the 2000s provide ample lessons for social movements popping up today. How can a social movement grow, broaden and deepen over time in order to build the kind of power that sways elected leaders?

“We wanted to show that ordinary people could get involved and raise their voices and make a difference,” Michael Heaney, one of the writers and producers behind the new documentary, The Activists: War, Peace, and Politics in the Streets, told The Indypendent. The film, directed by Melody Shemtov, attempts to create a historical record of the anti-war movement and the politicization of unlikely people who became leaders in the fight to end the wars in Iraq and Afghanistan.

The most poignant moments in the film occur when average people share their stories of personal transformation. We hear from grandmothers, students, people of faith and veterans involved with groups like Code Pink and Veterans for Peace. Heaney hopes that for young people or members of “the next movement,” that seeing this process in people like themselves will inspire them to abandon apathy. We observe street theater, mass demonstrations, door-to-door canvassing and grassroots candidates running for office. Like today, we witness people, for the first time in their lives, begin to fight for a better world.

The scope of the anti-war movement was massive. It included millions of people from around the world brought together by a moral conviction. But sustaining that sense of urgency and using it to bring about lasting change is the tricky part, as the activist Tom Hayden, who passed away last year, observes in the documentary.

“When you’re in a fight, when you’re in a war and the blood is flowing, there’s an urgency that — like it or not — is not the same as chronic problems like poverty,” Hayden remarks.

The core group of activists featured in the film dangerously tread in the kind of leftist “insularity” or “political identity paradox” that writers on the left like Jonathan Matthew Smucker have begun to critique.

The challenge for the left, according to Heaney, a professor of political science at the University of Michigan, is to “learn to talk in ways that don’t cut us off so much from the middle and the edges.”

The anti-war movement was able to do this insofar as it brought together people from different political perspectives who opposed the war. The difficulty, as during the Vietnam War, was in changing policy. A key difference between the two eras: the militarization of the police and increased surveillance post 9/11, which put the screws on the left in ways Nixon and J. Edgar Hoover couldn’t even imagine. More than 1,800 people were swept up in mass arrests during protests at the 2004 Republican National Convention in New York, for instance. Many more innocent people were ensnared by informants in terror plots concocted by the FBI and handed decades-long prison terms.

Yet, perhaps the final death knell for the anti-war movement came with election of President Obama.

“As the Democratic Party gained power, people who identified as Democrats lost interest in the anti-war movement,” said Heaney. “The anti-war movement demobilized at exactly the time when it could have had the most influence. This is how political parties and social movements trade off. It’s hard to sustain the momentum of both at the same time. Look at Trump right now.”

The task for the resistance of today, then, is to sustain the momentum behind social movements no matter who is in power. Simply because a politician is a Democrat or couches her remarks in the language of social justice, that does not mean she is on the side of activists in the street.

To Heaney, the greatest success of the anti-war movement was in providing an “opportunity for people to learn about how democracy works.” Movements are linked. The “people in the organizations resisting Trump right now cut their teeth in earlier movements,” like the anti-war movement and Occupy. Networks grow and new leadership is developed in each new wave of activism.

The Activists helps viewers reflect on a time when millions of people felt connected to something greater than themselves and puts into perspective the challenges we face today. “We have a big job ahead of us if we want our democracy to work,” said Heaney. “These are perilous times and we need ordinary people speaking out and getting involved.”

The Activists: War, Peace, and Politics in the Streets is available at bullfrogfilms.com