Constitutional scholar Lawrence Tribe and Robert Reich weigh in. A majority of the public agrees. To rescue democracy, we need to make it happen. 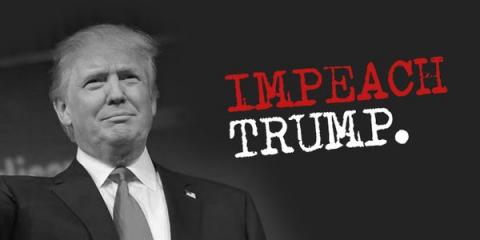 The End of Trump
Robert Reich
robertreich.org
May 14, 2017

Trump’s obstruction is potentially far more serious. It involves an investigation about whether Trump or his aides colluded with Russia in rigging a presidential election – the most direct assault on American democracy in history,

Last Thursday, in an interview with NBC News’s Lester Holt about his firing of Comey, Trump said: “I was going to fire regardless of recommendation.” Trump also said that he had pressed Comey during a private dinner to tell him if he was under investigation.

Trump conceded that the ongoing investigation into Russian influence on the 2016 election, which includes a probe into the possibility that Moscow was coordinating with the Trump campaign, was one of the factors Trump considered before firing Comey.

“In fact, when I decided to just do it, I said to myself, I said, ‘You know, this Russia thing with Trump and Russia is a made-up story, it’s an excuse by the Democrats for having lost an election that they should have won,’ ” Trump said.

The law is reasonably clear. If Trump removed Comey to avoid being investigated, that’s an obstruction of justice – an impeachable offense.

On Friday, Trump tweeted that Comey “better hope that there are no ‘tapes’ of our conversations before he starts leaking to the press!”

Here, the law is also clear. Seeking to silence, intimidate or even influence someone who is likely to offer evidence in a congressional or criminal proceeding is also an obstruction of justice – and an impeachable offense.

As a practical matter, though, nothing will happen until a majority of the House decides on bringing a bill of impeachment. Which means, under the present congress, twenty-two Republicans would have to join with House Democrats to put enough pressure on the Speaker of the House to allow such a bill to be considered.

The odds of this occurring in this Congress, under present circumstances, are approximately zero.

So – barring a “smoking gun” that shows Trump’s complicity with Russian operatives in interfering in the 2016 election – Trump’s fate seems to hinge on the midterm elections of 2018.

Those elections are less than eighteen months away. That’s a long time in American politics. Under a Trump presidency, that’s an eternity.

But there’s another possibility.

In my experience, most elected politicians have two goals – to do what they consider to be the right things for the American public, and to be reelected (not necessarily in that order).

If Trump’s poll numbers continue to plummet – particularly among Republicans and Independents – twenty-two House Republicans may well decide their chances for being reelected are better if they abandon him before the 2018 midterms.

Paul Ryan and the House Republican leadership might make a similar calculation, at least enough to put a bill of impeachment on the table.

Most House Republicans prefer Vice President Mike Pence to Donald Trump anyway. As one said to me several months ago, “Pence is a predictable conservative. Trump is an unpredictable egomaniac. Most of us are more comfortable with the former.”

There’s a good chance Trump’s polls will continue to fall. First, he’s shown to be his own worst enemy. Even when things are going reasonably well, he seems bizarrely intent on stirring controversy – and saying or tweeting things that get him into trouble.

There’s also a matter of the economy. The expansion that began in 2009 is getting long in the tooth. If history is any guide, we’re due for a slowdown or recession. And justified or not, presidents get blamed when Americans lose jobs.

Donald Trump doesn’t have the character or the temperament to be president of the United States. But this obvious fact isn’t enough to get him fired.

He’ll be fired when enough Americans decide they can’t abide him anymore.

Then, maybe in an impeachment proceeding, it will come out that Trump did something incredibly stupid – like give a nod of approval to one of his campaign bottom feeders like Roger Stone to tell a Russian operative to go ahead with their plan to interfere in the 2016 election.

The House impeaches. The Senate convicts. That’s the end of Trump.

New Poll Says Majority of Americans Polled Want Trump Impeached
Kali Holloway
AlterNet
May 16, 2017
For the first time, more Americans would say “yea” to impeaching Donald Trump than would say “nay,” according to a new poll.
A survey from Public Policy Polling released Tuesday finds 48 percent of those questioned support impeaching the president, while just 41 percent would oppose the move. The negative feelings about Trump also affected prognostications about how long his presidency will last. Just 43 percent of respondents think Trump will remain in office for four years, while 45 percent think he won’t complete his term. Another 12 percent “aren't sure one way or the other.”
Researchers behind the poll attribute the gloomy outlook on Trump to several obvious reasons; namely, respondents don’t buy the reasons given for FBI director James Comey’s firing; they suspect the Russians helped put Trump in office; they don’t like the GOP's American Health Care Act; and they think Trump is dishonest. Plus, lots of Americans just think Trump is doing a bad job in general. The survey found “40 percent of voters approve of the job Trump is doing to 54 percent who disapprove.”
While a number of congressional Democrats have proposed impeaching Trump, no Republicans have echoed those calls. Many of those who call for articles of impeachment to be prepared point to questions about Trump's mental competency. Under the 25th Amendment, the president can be removed from office if he (they’ve all been he) is “unable to discharge the powers and duties of his office." The language in full states:

In April, a group of 35 psychiatrists gathered at Yale School of Medicine to address what they label Trump's “dangerous mental illness."
“As some prominent psychiatrists have noted, [Trump’s mental health] is the elephant in the room,” Dr. Bandy Lee reportedly stated. “I think the public is really starting to catch on and widely talk about this now.”
Kali Holloway is a senior writer and the associate editor of media and culture at AlterNet.