May 27, 2017 Heather Stewart and Rowena Mason The Guardian
printer friendly 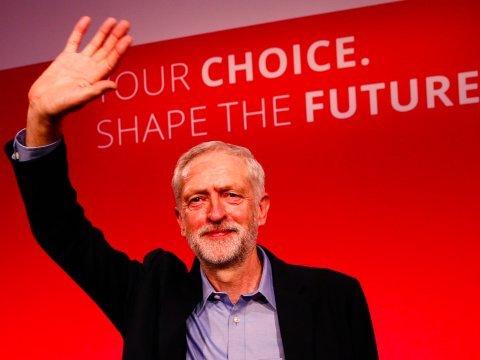 Jeremy Corbyn will return to campaigning for the general election on Friday morning after the pause following the Manchester bombing. He plans to give a speech criticising police cuts and drawing a link between British foreign policy and terror attacks.

With less than a fortnight until polling day, the Labour leader will tell an audience in London that a government led by his party would provide more resources for law enforcement and the NHS to ensure people were “not protected and cared for on the cheap”.

The longtime peace campaigner and former chair of the Stop the War coalition will also argue that it is the responsibility of government to ensure that “our foreign policy reduces rather than increases the threat to this country”.

Corbyn will say: “Many experts, including professionals in our intelligence and security services, have pointed to the connections between wars our government has supported or fought in other countries and terrorism here at home.

“That assessment in no way reduces the guilt of those who attack our children. Those terrorists will forever be reviled and held to account for their actions. But an informed understanding of the causes of terrorism is an essential part of an effective response that will protect the security of our people that fights rather than fuels terrorism.”

He will argue that the government should admit the “war on terror” had failed and rethink its approach.

Ben Wallace, a Conservative security minister, criticised Corbyn’s comments as “crass and appallingly timed” and defended the government’s record on security spending. “He needs to get his history book out,” Wallace told BBC Radio 4’s Today programme. “These people hate our values, not our foreign policy.”

Tim Farron, the Lib Dem leader, also criticised Corbyn’s intervention: “A few days ago, a young man built a bomb, walked into a pop concert and deliberately slaughtered children. Our children. Families are grieving. A community is in shock. Jeremy Corbyn has chosen to use that grotesque act to make a political point.”

Farron added: “I don’t agree with what he says, but I disagree even more that now is the time to say it. That’s not leadership, it’s putting politics before people at a time of tragedy.”

The Labour leader was defended by Barry Gardiner, the shadow trade secretary. He said: “What Jeremy [Corbyn] is saying is that we need to profoundly reassess the way in which there are linkages. What we did there was we made a military intervention and then withdrew. That country has been in chaos. There was no planning for what might happen afterwards. Now that country has women being sold in slave markets in its cities. That country is in chaos.

“Military intervention has gone in hard then lost its way. You can look back to Iraq, Afghanistan and see that the stabilisation of a country is so important.”

Corbyn and his close aides have long held the view that British foreign policy, including the involvement of troops in Iraq and Afghanistan, which he vehemently opposed, has exacerbated the risk of terrorist attacks by destabilising the Middle East and fuelling suspicion of the west.

In a speech at the Chatham House thinktank in May, he suggested a Labour government would seek to rely on a “triple commitment” to defence, development and diplomacy, to protect Britain’s interests, rather than a “bomb first, talk later” mentality.

After the terror attack on Manchester, the Conservatives are likely to seize on the intervention as evidence that Labour would be soft on terrorism.

But Corbyn will highlight Labour’s pledge to put 20,000 more police officers on the streets, saying: “Labour will reverse the cuts to our emergency services and police. Once again in Manchester, they have proved to be the best of us. Austerity has to stop at the A&E ward and at the police station door. We cannot be protected and cared for on the cheap.”

Many election candidates across the country resumed low-key campaigning, delivering leaflets and knocking on doors on Thursday, after a minute’s silence was observed in the morning to honour the victims of Monday’s deadly attack.

Corbyn’s speech will mark the full resumption of national campaigning. He will say: “No government can prevent every terrorist attack. If an individual is determined enough and callous enough, sometimes they will get through.

“But the responsibility of government is to minimise that chance – to ensure the police have the resources they need, that our foreign policy reduces rather than increases the threat to this country and that at home we never surrender the freedoms we have won and that terrorists are so determined to take away.”

He will also talk about the “British values” seen in the aftermath of the Manchester Arena attack, saying: “I want the solidarity, humanity and compassion that we have seen on the streets of Manchester this week to be the values that guide our government. There can be no love of country if there is neglect or disregard for its people.”

Corbyn and a small group of aides have planned a “phased return” to electioneering after the pause, which was agreed to by the major parties.

Andrew Murray, another former Stop the War chair and former communist, who was recently drafted in to Labour HQ to help with the campaign, shares many of Corbyn’s views, regarding Britain’s involvement in Middle East conflicts, including in Syria, as “western imperialism”.

Labour had appeared to be eating into Theresa May’s poll lead last weekend as the Conservatives struggled to explain the social care policy that was the centrepiece of their manifesto.

The prime minister executed an abrupt U-turn on Monday, announcing that she would consult on introducing a cap on total costs, so older people did not face unlimited liability. At an awkward press conference in Wrexham, she repeatedly insisted “nothing has changed” and played down accusations that the Tories would impose a so-called dementia tax.

But May halted the campaign to take direct control of the aftermath of Monday night’s attack, chairing meetings of the Cobra emergency committee and delivering a defiant speech in Downing Street insisting British values would prevail over terrorism. She will go to Taormina in Italy on Friday to attend a summit of the G7 industrialised states, but other ministers will return to campaigning.

Read more comment and opinion from The Guardian, the world's leading liberal voice