The plan could help sign up more than 1 million eligible but unregistered Illinoisans by automatically registering citizens when they interact with the DMV and other state agencies, unless they decline. 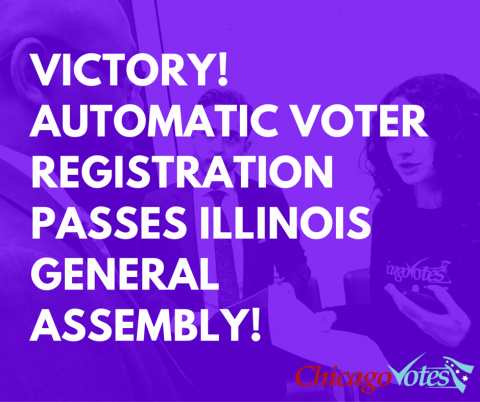 Springfield, Ill. - The Illinois House passed a bill today to bring automatic voter registration to the state by a unanimous vote, following Senate passage earlier this month with no votes against. The groundbreaking legislation, which was amended before House passage, will become law upon Senate final approval and Gov. Bruce Rauner’s signature.

The plan could help sign up more than 1 million eligible but unregistered Illinoisans by automatically registering citizens when they interact with the DMV and other state agencies, unless they decline. It is the first automatic voter registration legislation to bring the reform to a broad range of state agencies, beyond only driver’s license issuing offices.

The bill, which passed 48-0 in the Senate and 115-0 in the House, was sponsored by Sen. Andy Manar (D) and other legislators. The Just Democracy Coalition advocated strongly for the legislation, which also had the support of several local election officials including Cook County Clerk David Orr, along with the Brennan Center for Justice at NYU School of Law.

Illinois would be the ninth state plus Washington, D.C., to approve automatic voter registration. Oregon, the first state to fully implement the plan, is now a national leader in voter registration rates. The unanimous vote in both chambers is the culmination of an increasing trend of bipartisan support for the reform.

“Illinois joins a growing national consensus,” said Jonathan Brater, counsel with the Brennan Center’s Democracy program. “Automatically registering citizens is a common-sense idea that will improve our democracy. More and more, lawmakers of all stripes are understanding the benefits. This groundbreaking accomplishment is a testament to the soundness of automatic voter registration as a policy, and the persistence of civic groups, election officials, and legislators in bringing it closer to reality. We hope Gov. Rauner will make it official and sign this bill right away.”

Read more about Automatic Voter Registration and more about this year’s voting trends in the Voting Laws Roundup 2017.