books Q. and A. With Brooke Gladstone on her Book on the Media

National Public Radio's media critic Brooke Gladstone talks with the Poynter Institute about the myth of post-fact journalism and the need for journalists to ferret out and offer common pools of accurate information, if only to provide contending parties with a basis to negotiate and for democracy to work. 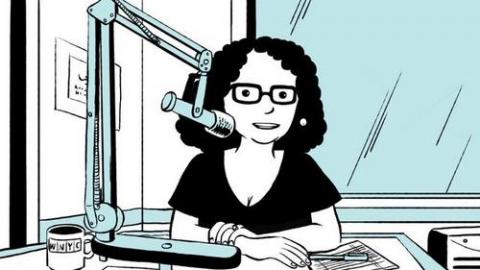 Brooke Gladstone doesn't like the term "post-fact." But she doesn't think facts are doing great, either.

Her new book — "The Trouble with Reality," available May 16 — is a brief work targeted at those unsettled by President Trump's attack on facts.

True to form, the co-host of WNYC's "On The Media" doesn't deliver a monologue but a pacey essay extensively quoting thinkers past and present. Neil Postman, Thomas Jefferson and Walter Lippmann all bring something to her dissection of reality. Barring a Gulliver-related metaphor that doesn't quite deliver, this approach turns out to be highly readable. 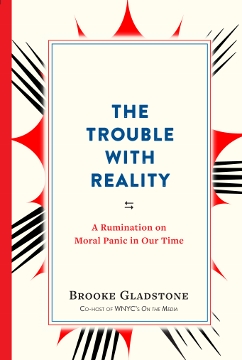 Gladstone's book is both of the moment and consciously historical. It avoids simplistic definitions of reality and easy prescriptions for restoring a never-existent golden age for facts. While she doesn't offer a definitive road map to get out of this situation, Gladstone is unabashed in her belief that more reporting — not less — must be part of the solution.

Poynter reached Gladstone by phone at her WNYC office in New York City. The following Q-and-A was edited for brevity and clarity.

On several occasions in the book, you are keen to draw a distinction between facts and reality. You write, for instance, that "facts, even a lot of facts, do not constitute reality. Reality is what forms after we filter, arrange, and prioritize those facts and marinate them in our values and tradition." What do you think this distinction means for the journalistic practice of fact-checking public claims?

It doesn't really change the fundamental role of journalists to fact-check. Facts are basic components of truth.

What I am talking about is the difference between things we observe, that we can fact-check, and the broader context. The unseen things. So you've got facts, and you've got the truth. And journalists can address both of them — though fundamentally, facts are easier. There's a big story to be told about reality today, but telling the smaller story of facts is also important. Correcting the GOP misrepresentations on the replacement of Obamacare, for instance, is an important story for fact-checkers.

I noticed (and appreciated, given my position) that you never used the trendy "post-fact" term to define the times we're living in. Can I ask you to explain why not?

Certain phrases have become so imbued with politics — and "post-fact" is one of them. The term dates back at least to the Bush aide — later discovered to be Karl Rove — who told Ron Suskind of The New York Times that the "reality-based community" was losing out. To say that this loss of a common pool of knowledge from which to draw just happened with Trump isn't true. It's been an ongoing process.

This is a moment of such dislocation that we require a new vocabulary, and "post-fact" doesn't do it for me. For me this is a moment, for sure, but it isn't purely "post-fact." It has something to do fundamentally with reality that goes beyond politics, though it has made our current politics possible and it can lead us in a very frightening direction.

I want to stay on the uniqueness of this moment. You talk about the draining of a consensus fundamental to a democracy. Is that really something that has changed with Trump? Bill Bishop was talking about landslide counties in 2008, cable news has arguably been dividing Americans for two decades...

I wasn't as much concerned about the idea of consensus as of having common pools of information.

You can't discuss both sides of an issue if you don't have the common pool of information, if your realities are so entirely separate you have no basis on which to negotiate. Then democracy can't happen and you open the grounds to authoritarianism, which is what so many historians are concerned about.

We're all very (small-c) conservative when it comes to changing our minds. You write that as a rule "You alter only what you must to avoid collateral damage to the code you live by." Liberals smarting from defeat may be going through this process, but what about vindicated Trump supporters? Is there any hope that both sides will be questioning reality as they perceive it?

Oh, I think both sides will have to continue to change. The nation will change quickly in ways that people don't anticipate. A lot of people will have to deal with inconvenient facts in the months to come.

In the book, you essentially call Jefferson naive for claiming that truth ultimately prevails in an open society. "Oh, come on," you write. "The laws of human nature do not provide for the triumph of reason." Does this mean we need to fight for the truth? Or change mechanisms to ensure it is more likely to prevail?

I wasn't calling him out as much as saying, "if only it were that easy" that you could present someone with a fact and it would change their view. Much of the book speaks to how we construct our views and what we choose to leave out and why. Our lives are much more about the filtration than the accumulation of information. That's the idea that I am building the case for. So when Jefferson says facts will prevail as Milton said before him — it's simply not true! Ultimately, external circumstances will prevail.

And I think if I had advice for journalists in this moment, it is to keep referring back to the truth, to keep doing fact-checking but more importantly to refer to the circumstances in which people live — because that's how we filter our information. And not just about abstraction.

Journalists still have to engage with the facts — as they have and as they will — but perhaps need to get better to put in them a context that is relevant to people. A fact in isolation doesn't mean anything if it isn't thoroughly contextualized. Otherwise people won't integrate them.

In quoting Lippmann, you say that he blamed the press for peddling the myth that it can fix what ails a democracy. A series of "truth-centric" PR campaigns from media outlets like The New York Times and The Washington Post seem to be doing exactly the same thing. Do you see parallels or do you think today's top media executives are more sanguine about what they can and can't achieve?

There's another fascinating parallel ... Slightly earlier in that chapter you see Lippman basically lamenting the fact that part of the reason the press can't play this role is that people won't pay for information. If information is so important why is there no structure to ensure that it can be guaranteed? It is forced to act as a public institution without the kinds of public support that makes schools and other altruistic institutions possible.

Interestingly, it would seem to me that at a time that the public has gotten more used to not paying for information, it becomes almost a moral responsibility to support the reporting and dissemination of quality information — of real, factual information. And so yes, these organizations — the Times, The Post, public radio — are all becoming very savvy in using this to fund their operations. But the fact is the nation's great media institutions have taken a terrible hit in the wake of transmission of information becoming free through the internet.

Now people suddenly see that not all information is created equal.

Although media outlets are saying "Yeah, you need us" — Lippman never said the opposite — this is a moment when the public has been forced to confront something it maybe never had to confront. If the public doesn't pay for quality information, the public won't get it and the nation will suffer as a consequence.

It seems to me that your prescription for the media, lightly administered in the book, is to listen more. ("You cannot march to a long term solution to your reality problem with a cadre of like-minded allies.") Is that fair? Is that enough to restore that modicum of shared reality we seem to have lost?

It isn't as much "listen more" as "search more."

I'm not saying "listen to a bunch of racists to understand racism," or that you are under any obligation to change your opinion. Just that if you do not understand something, don't see that as a kind of refuge.

If you want to make your reality more durable — so it doesn't crack or shatter the way it has for so many of us in the past year — then use that incredulity as a sign that it's time to figure out what is their argument.

Listening doesn't mean that you are going to take the sides of people's whose values are completely inconsistent with your own. It simply makes the world more comprehensible and points the way to pasting it back together.

Author Brooke Gladstone hosts NPR's On the Media. She was an NPR Moscow-based reporter, its first media reporter, senior editor of NPR’s All Things Considered, and the senior editor of Weekend Edition with Scott Simon. The recipient of two Peabody Awards, a National Press Club Award, and an Overseas Press Club Award, she also is the author of The Influencing Machine (W.W. Norton), a media manifesto in graphic form, listed among the top books of 2011 by The New Yorker, Publisher’s Weekly, Kirkus Reviews and Library Journal, and among the “10 Masterpieces of Graphic Nonfiction” by The Atlantic.
[Interviewer Alexios Mantzarlis joined Poynter to lead the International Fact-Checking Network in September of 2015. In this capacity he writes about and advocates for fact-checking. He also trains and convenes fact-checkers globally. Mantzarlis previously served as Managing Editor of Pagella Politica (Disclosure) and FactCheckEU, respectively Italy's main political fact-checking website and the EU's first multilingual crowd-checking project. He has presented fact-checking segments on Italian TV and led seminars on fact-checking around the world. Before becoming a fact-checker he worked for the United Nations and the Italian Institute for International Political Studies.]