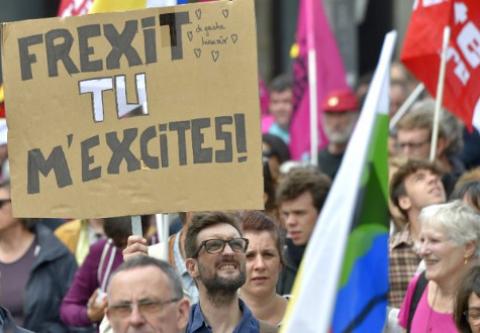 The good news this May was that French voters rejected far-right Marine Le Pen by a two-to-one margin in the second round of the Presidential election. “At least the French are not schmucks as the Americans!” were the first words that passed the sweet lips of my Provençal partner Elyane when the radio announced Le Pen's defeat. As the headlined: “French Annoyingly Retain Right to Claim Intellectual Superiority over Americans.” Aside from this moral victory, the French people have little to be happy about.

The bad news was that France ended up electing Emmanuel Macron, an efficient technocrat who consciously incarnates French capital's need to eliminate the ‘French exception’ and level the wages, rights and benefits of the French common people down to the average of the European Union (which includes Romania and Bulgaria).

Faced with Macron's calmly-worded, reasonable, deliberately transparent class war agenda, it should be obvious that France needs a united Left of parties, unions, social movements and local associations to oppose it – the June during the legislative elections and later in the streets. Such a powerful coalition from below came together spontaneously against Macron/Hollande's pro-business Labour Law during the “hot” Spring of 2016, which included strikes, blockades, occupations and all-night discussions. Where is it now?

Alas, more bad news: the French Left today is totally divided, splintered as never before. After May Day, the labour unions couldn't even agree to march together. This Sunday, June 11, French voters will face the first round in the legislative elections to the 577 seat National Assembly. These elections will decide whether President Macron will have a legislative majority with which to govern unopposed, a distinct possibility with the opposition parties so hopelessly divided.

Last week I watched a young, idealistic Parti communiste français (PCF) candidate practically in tears at a Médiapart round-table as he told how at least four left parties were competing against each other in the first round in his popular Paris district. This Communist candidate was heartbroken because during the Presidential election, his Party had supported Jean-Luc Mélenchon's (Unbowed) coalition with all its strength, and now Mélenchon had sent an Insoumise candidate into his district to compete with him in the legislative election. Why?

Historically, in multi-party systems, Left parties negotiate alliances and coalitions so as to agree on a single candidate, presumably a strong one, in each local district so as to maximise the chance of winning nationally. Each party in the alliance gets assigned a certain number of prospective seats in the National Assembly in proportion to its size – subject to much haggling and horse-trading. Some negotiations between Mélenchon and the Communists were held last month, but apparently they broke down early. This, in spite of the fact that Mélenchon had previously headed La front de gauche, a coalition including the Communists and his own Parti de gauche (a 2008 left split from the Socialists). As so often happens in party politics, control trumped goal. The Communists still have representatives in the Chamber and control local offices in many districts, and wanted to protect their turf. Mélenchon wants to dominate the Left through his Insoumise movement.

Mélenchon's strategy is based on strength of the 20 per cent of the electorate that voted for him in the Presidential rounds, and is to run candidates in every possible district with the goal of winning an (unlikely) parliamentary majority. Under the Constitution of the Gaullist 5th French Republic, this would oblige President Macron to appoint Mélenchon Prime Minister (an arrangement known as “cohabitation”) and share power. In Sunday's first round Insoumise candidates who get 20 per cent of the votes would theoretically place into the second round in a field where the Right is also splintered. Along with Macron's handpicked “new faces” running for En Marche, there are also several traditional conservative parties and of course the far-right Front national that won a third of the votes in May's Presidential election.

In one version of Mélenchon's strategy, the Insoumise candidates could conceivably beat the Macronistas and the Le Penites and end up with a majority in the second round, automatically making him Prime Minister. But the more the Left field is crowded, the greater the chance of a repeat of the Presidential voting: Macron's En Marche faces off against the Front national in the second round, giving Macron an easy majority and marginalizing the Left for the next five years. This would be the tragic consequence of Left disunity based on turf wars and the party politics of sustaining small groups.

In another view, even in the minority, Mélenchon's Insoumise would emerge as the hegemonic organization of the Left for the next five years, well-placed for the next elections in 2022. There is not much competition left. The electorate of PCF, despite its hold on office and ties to the CGT labour union, has shrunk to not much bigger than the ‘Trotskyist’ Nouveau parti anti-capitaliste (part of which has joined the PCF in a coalition called Ensemble).

The Parti socialiste has also shrunk, having disgraced itself in power. President Hollande, with only 4 per cent approval rating, didn't even dare run in the primaries, an historical first for an outgoing president. The Socialists’ right-wing has followed Macron in deserting the sinking ship. The SP's Presidential candidate, the young leftist Benoit Hamon who won the presidential primary, seems a refreshingly sincere and honest social-democrat. He is attractive to voters who consider Mélenchon a dangerous demagogue and are suspicious of his apparent support of Putin's annexation of the Crimea and his flirtation with the idea of a ‘Frexit’. A divided Left, indeed!

So Who is Macron?

A brilliant young graduate of France's elite state graduate schools (founded by Napoleon to run his Empire) with a successful career in banking and public administration, Emmanuel Macron is well read on nearly every subject and totally confident of his competence and right to rule. He coolly showed himself a statesman last week castigating Trump's withdrawal from the Paris Climate Accords. Speaking in elegant, charmingly accented English (a first for a French President), he famously concluded: “Make our planet great again.” Macron's government is made of neoliberal technocrats, half of them women. Unlike the usual political hacks, his ministers are younger, more dynamic, more diverse – fresh political faces recruited directly out of the economic establishment like Macron himself. This is a new broom eager to sweep clean, so watch out.

As a candidate Macron had made his program absolutely clear. He is pledged to strip French workers of what remains of their on-the-job rights and protections by further expanding the pro-business Labour Law – a “reform” he helped impose while Economics Minister in the neoliberal government of his predecessor, the unpopular Socialist Hollande. However, even if Macron does not win a majority on June 18 in the second round of the Legislatives, he is pledged to impose his neoliberal, class-war program by Decree. That's how Hollande's Socialist government ‘passed’ its pro-employer labour reform last summer after a very hot spring of strikes, blockades, mammoth demonstrations and opposition from many Socialists in the Chamber. (See my “The French Stand up.”)

Macron is also pledged to another anti-worker ‘reform’: the downgrading of France's wonderful post-WWII Social Security system which includes healthcare, unemployment insurance, retirement, minimum survival income, housing subsidies and welfare for the poor. The Sécu, as it is known, was created after WWII by workers’ organizations coming out of the Resistance, when the de Gaulle government depended on Communist support to stay in power and the French industrialists were in disgrace for their vile collaboration with the Nazis during the Occupation. The idea of the ‘social wage’ – in addition to the salary – was enshrined in France's post-war constitution.

The Sécu remained a self-governing non-state national institution even after de Gaulle placed business representatives on the board to undermine it. Today, the government votes on its budget. As for unemployment insurance, which is governed, by a bi-part commission of unions and employers, Macron would put the state in charge, with budgetary powers. The impact of these “reforms” will be to break up the semi-autonmous Sécu and turn its functions over to the state. These “reforms” will allegedly rationalize the system and reduce costs, but in fact they are designed to progressively shrink the social safety net that has made ‘the French exception’ so popular. A grim prospect for average French people and lovers of France's quality of life.

Last week, in researching for this article, I asked my neighbour, a poised, well-educated young mother from a good local family, to explain the intricacies of the French electoral system to me. When the truth finally dawned on me that with the Left divided there is very little hope left for Social Security and fair labour laws, I blurted out: “Then what will the French people do?” She calmly replied: “We go down into the streets and throw the bastards out! We're good at that.” Since Summer Vacation is the true God worshipped by the French, this battle may not take place until next September.

How to Kill Social Security

Macron's proposal to ‘reform’ the Sécu is a devilishly clever plan to exploit a conflict between France's two most numerous and productive classes: the organized working class of historically left-wing waged and salaried workers and the independents: a large hard-working, petty-bourgeoisie of artisans, shop keepers, and farmers, whose organizations have historically leaned to the far-right.

Macron proposes to attack a very real and long neglected problem in the French ‘single-payer’ social welfare system: it is not universal or equal. Independent workers are not covered by the Sécu medical insurance and are forced to pay their dues into a variety of different funds in return for inferior retirements and benefits. In 1945, the independent farmers and shop-keepers who had made money during the war voted not to join the salaried workers in the single-payer health insurance system and set up their own private funds.

When their sector declined, they ended up screwed. Today some independents are even forced to pay into their funds at the beginning of the fiscal year, before they even get their business off the ground! They are jealous of salaried workers and hostile to unions, especially the railroad workers who get extra benefits. This petite bourgeoisie is a numerous, industrious and highly productive part of the French population. It has often been mistreated by the government and neglected by the Left. Its political anger has often been channeled into the far right – the Poujade movement in the 1950s and today Le Pens’ Front national.

The obvious solution would be to try to pull all these independents into the Sécu and make it truly universal; or, alternately, to insure that the dues and benefits of artisans are comparable. In other words, leveling up the program. Macron's solution seems to be that his government takes over and levels down the benefits of the different groups to the lowest common denominator. His proposed successor institutions to the Sécu will not be self-sustaining or self-governing. They will be funded by the government out of the general fund and the amount available will predictably decline from year to year as Macron ‘rationalizes’ and reduces costs in the name of ‘making France competitive again’. •

Richard Greeman has been active since 1957 in civil rights, anti-war, anti-nuke, environmental and labour struggles in the U.S., Latin America, France (where he has been a longtime resident) and Russia (where he helped found the Praxis Research and Education Center in 1997). He maintains a blog at richardgreeman.org.