The Trump administration recently released its comprehensive budget proposal, optimistically titled "A New Foundation for American Greatness." The budget was immediately condemned by Southern politicians in both parties, as well as advocates for the poor, immigrants, and other vulnerable populations in the South. 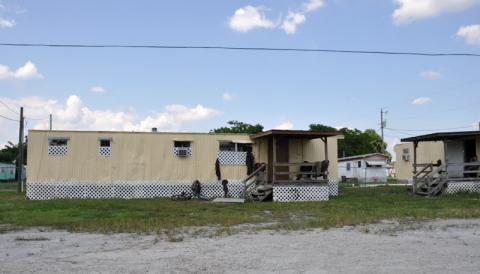 Migrant farmworker housing in Florida. Migrant workers across the South who are already victims of high rent and dangerous living conditions, like this trailer renting for $500 per week in Immokalee, Florida. ,National Farm Worker Ministry website

"Vast proposed cuts to federal housing programs couple with a wholesale ripping of the social safety net for the most vulnerable," wrote Moises Loza, executive director of the Housing Assistance Council, a national nonprofit. "The budget strikes particularly at tribal and rural communities. Many of these communities, in decline for decades, are now awash in a national opioid crisis and are far-removed from Wall Street's economic recovery."

Southern communities where poverty rates and food insecurity are high and employment opportunities are scarce would feel the cuts particularly hard. The proposal slashes SNAP, the federal food stamp program in which over 16 million Southerners are currently enrolled, by $190 billion — nearly half of the program's funding. It redirects over $4.5 billion in funding to immigration enforcement, including increases in detentions and deportations. At the same time, it adds $469 billion to the defense budget over the next 10 years.

The South is home to over 12 million immigrants who live in cities and rural areas across the region. Although undocumented and even some documented immigrants do not qualify for the most common American safety net programs, the Trump budget specifically singles out immigrants for "rely[ing] on Government benefits financed by taxpayers." The budget uses this language to justify drastic increases in funding for immigrant detention and deportation. It also proposes cuts to several other programs that will impact immigrant communities as well as other vulnerable populations:

* WIC, the food assistance program specifically for women, infants, and children, would be cut by over $1 billion under the budget proposal. This is the only federal supplemental nutrition program for which "not-qualified" immigrants — those who are not lawful permanent residents, refugees, victims of abuse or trafficking, or Cuban or Haitian — are able to qualify.

* Emergency Medicaid, the only Medicaid service available to "not-qualified" immigrants, would lose huge portions of its funding under the proposed $600 billion cuts to Medicaid over the next 10 years.

* The Earned Income Tax Credit and Child Tax Credit, refundable tax credits that are targeted at the working poor, would require a Social Security number to qualify. This is an explicit effort by the Trump administration to keep undocumented immigrants and immigrants who are not qualified to work in the United States from benefiting from these programs. In addition to these eligibility restrictions, the budget also reduces funding for both the EITC and the CTC.

Pain for the rural South

Trump's proposed budget would eliminate or significantly decrease federal funding for a number of programs that are crucial for rural communities throughout the region:

* The Appalachian Regional Commission and the Delta Regional Authority are vital economic development agencies for some of the poorest parts of several states, including 11 in the South. The ARC has invested over $175.7 million in regional projects over the last year and a half, while the DRA has leveraged $3.3 billion in investments in the Delta region since its founding in 2000. The elimination of these agencies as proposed in Trump's budget would be economically devastating for rural communities in Appalachia and the Delta.

* Medicaid benefits would be cut by $610 billion over 10 years in the proposed budget. If the Affordable Care Act stays intact, these cuts would hit Arkansas, Kentucky, Louisiana, and West Virginia — Southern states that have accepted the Medicaid expansion — particularly hard. If the Senate passes the American Health Care Act, which could lead to $800 billion in additional cuts, rural communities (which already have extremely high rates of the uninsured) could see the number of uninsured individuals skyrocket.

* Single-Family Housing Direct Home Loans, which provide payment assistance to low-income applicants to aid them in purchasing homes in rural areas, would be eliminated.

* Mutual Self-Help Housing Grants, which support organizations that help low-income individuals and rural families construct their own homes in rural areas, including on tribal lands, would be eliminated.

* Farm Labor Housing Loan Program, which provides financing to develop housing that will have affordable rents for year-round, migrant, and seasonal farm laborers, would be eliminated.

* Rural Health Grants across the board would lose funding. This includes decreases in funding for the Rural Hospital Outreach Grant Program, which aids small rural hospitals in accessing resources like ambulances and long-term care facilities, and ending federal grants to state rural health offices.

* Legal Service Corporation, which provides legal assistance to low-income individuals, including a program focused on rural communities, would entirely lose federal funding. In 12 of the 13 Southern states, 20 percent or more of the population is eligible for legal aid services.

The release of the administration's proposed budget is just the first step in the budget-making process. Over the coming months, both houses of Congress will vote on their own budget resolutions and negotiate appropriations before voting on a final version. The new fiscal year begins on Oct. 1.

Olivia is an undergraduate at Yale University majoring in history and political science and an intern with the Institute for Southern Studies/Facing South.