A new Republican-controlled National Labor Relations Board could roll back pro-union decisions dating back decades. This could be devastating to already weakened unions. With private sector union membership hovering at a dismal 6.4 percent – down from about 17 percent in 1983 – nothing short of the end of the labor movement could be at stake. 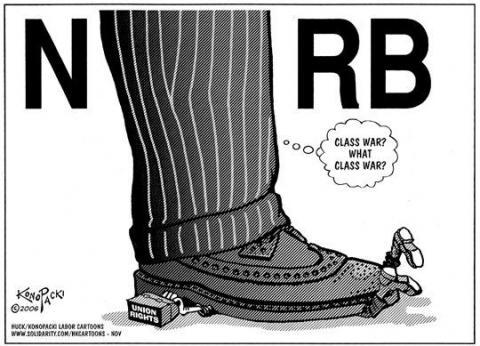 , Huck/Konopaki Labor Cartoons
Last October, employees of the Elderwood Nursing Home in Grand Island, New York, voted to unionize after years of dealing with short staffing, stagnant wages and problems with management. Six months later, the company has yet to come to the bargaining table, claiming that there are unresolved legal questions about whether licensed practical nurses can be part of the Service Employees International Union (SEIU).
Yale University has recently come under criticism for making a similar decision. Despite a February vote to unionize by graduate students in eight departments, Yale has so far resisted calls to begin the bargaining process. Instead, it has appealed the decision to certify the election and is refusing to bargain until the appeal is decided.
Elderwood and Yale could hardly be more different. Yale is a world-class Ivy League bastion of higher education. Elderwood is a medium-sized elder care company that operates nursing home facilities in New York, Pennsylvania and Rhode Island. Yet both have made the strategic decision to not recognize the right of their employees to unionize. Why?
My research on the decline of the labor movement suggests a reason: Employers are counting on a changing of the guard at the National Labor Relations Board (NLRB).
Republicans Take Control
The NLRB is the administrative agency that is tasked with enforcing the National Labor Relations Act, the federal statute that gives employees the right to unionize and collectively bargain. The NLRB consists of five members who are appointed to five-year terms by the president upon the advice and consent of the Senate.
Right now, there are two vacancies on the board that President Donald Trump will fill. Once the Senate confirms President Trump’s nominees, Republicans will control the board for the first time since 2007.
The background of the three candidates reportedly under consideration suggests that the board will in fact be much friendlier to business interests under the Trump administration. One of the potential nominees, Doug Seaton, has made a career of being a “union-buster,” the term used to describe a consultant brought in by employers to beat a unionization campaign. Another, William Emanuel, is a partner at Littler Mendelson, one of the largest and most successful anti-labor law firms in the country. Less is known about the third potential candidate, Marvin Kaplan, but his history as a Republican staffer suggests he may also represent employers’ interests.
Many observers assume that this new board will overturn many Obama-era precedents that favored unions. These precedents include questions such as how to define bargaining units, at issue at both Yale and Elderwood.
But the new board could go even further and roll back pro-union decisions dating back decades. This could be devastating to already weakened unions. With private sector union membership hovering at a dismal 6.4 percent – down from about 17 percent in 1983 – nothing short of the end of the labor movement could be at stake.
How Politics Intruded on the NLRB
The composition of the NLRB is important because most claims regarding the right to organize and collectively bargain are decided by the agency.
Unlike other employment statutes, such as Title VII and the Fair Labor Standards Act, individuals and unions cannot file claims in federal court and instead must participate in the administrative process set up by the National Labor Relations Act. While aggrieved parties can appeal board rulings to federal appeals courts, judges grant a high degree of deference to NLRB decisions.
In other words, three board members – a bare majority of the board – have an enormous ability to influence and shape American labor policy.
Given the amount of power these three individuals can wield, it is no wonder that the NLRB has become highly politicized in the decades since its creation in the 1930s. Ironically, the board was originally established as a way to try to insulate labor policy from political influences.
The drafters of the labor act believed that the federal courts were hostile to labor rights and would chip away at the protections in a way that would be bad for unions. Instead, the board has become a political battlefield for the two parties who hold very different views about labor policy.
This politicization came to a head during the Obama administration, when it became impossible to confirm anyone to serve on the NLRB. In response, Obama appointed several members using his recess appointment power, which allows the president to avoid Senate confirmation of nominees when Congress is in recess.
Employers challenged the move, and the Supreme Court eventually invalidated the recess appointments as executive overreach in NLRB v. Noel Canning. After the decision, Obama and the Senate finally agreed on five members that were confirmed. This new board, with a Democratic majority, then decided many of the precedents that employers hope the new members will overturn.
Flaws in the National Labor Relations Act
So what will happen if Elderwood and Yale bet wrong and lose their appeals in front of the new Republican-controlled board?
In all likelihood, not much. The board process is long and cumbersome. It often takes years from the filing of a charge for failure to bargain to the board’s decision. In the meantime, employers hope that unions will have turnover in their membership, become disorganized and lose support.
Moreover, the penalties available under the National Labor Relations Act are weak. If an employer is found to have violated the act, the board can issue a “cease-and-desist” letter and require the employer to post a notice promising not to engage in further violations. These penalties hardly encourage employers to comply with their obligations, especially when they have so much to gain from obstructing attempts to unionize and collectively bargain.
If the labor movement is to survive, the National Labor Relations Act needs to be reformed to fix these problems. Instead, a few years of a Republican-controlled NLRB could be organized labor’s death knell.

Nicole Hallett is Assistant Clinical Professor of Law, University at Buffalo, The State University of New York. She directs the Community Justice Center, which low-wage workers on employment matters, thugh not before the National Labor Relations Board.