The practical consequence of Monday’s decision in Morales-Santana is that fewer children of U.S. citizens will themselves gain citizenship, and that more people will be subject to deportation. It also means that the individual at the heart of this case, Luis Ramón Morales-Santana, is now set to be deported to a nation he has not lived in since 1975. 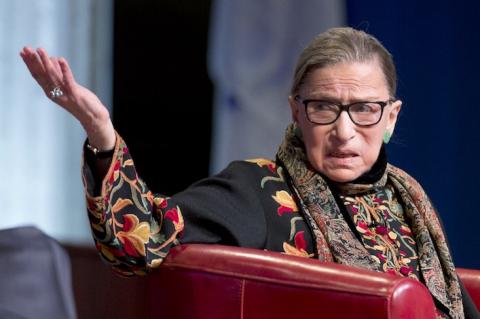 The holding of Morales-Santana is that a federal citizenship law that gives preferential treatment to the children of unwed U.S. citizen mothers — and only to unwed mothers, not to unwed fathers — is unconstitutional. This is a natural conclusion from the Court’s previous decisions holding that gender discrimination must be viewed with skepticism.

But the practical consequence of Monday’s decision in Morales-Santana is that fewer children of U.S. citizens will themselves gain citizenship, and that more people will be subject to deportation. It also means that the individual at the heart of this case, Luis Ramón Morales-Santana, is now set to be deported to a nation he has not lived in since 1975.

In this context, it’s easy to imagine the kind of click-bait headlines that conservative outlets could append to their write-ups of the decision. Headlines like “Immigrants suffer because of feminism” or “How do you like the Notorious RBG now, liberals?” come to mind.

Not everyone born abroad to a U.S. citizen automatically becomes a citizen themselves. Rather, at the time of Morales-Santana’s birth, the child of a citizen and a non-citizen born abroad is granted American citizenship only if their citizen parent “was physically present in the United States or its outlying possessions for a period or periods totaling not less than ten years, at least five of which were after attaining the age of fourteen years.”

This residency requirement has since been reduced to five years, and two after age 14.

Federal law, however, provides an exception for unwed mothers who are U.S. citizens. They can transmit citizenship to their children after “only one year of continuous physical presence” in the United States.

Such a rule, which treats fathers differently than mothers, is not allowed under the Constitution’s promise of equal protection of the law. As Justice Ruth Bader Ginsburg explains in her opinion for the Court, the special rule governing unmarried mothers is a relic of a more patriarchal era.

Up until the Franklin Roosevelt administration, citizenship laws generally presumed that in a marriage, the “husband is dominant” and the “wife subordinate.” For this reason, “a male citizen automatically conferred U. S. citizenship on his alien wife. A female citizen, however, was incapable of conferring citizenship on her husband; indeed, she was subject to expatriation if she married an alien.”

When a parental couple was unmarried, however, the law presumed that the “unwed mother is the natural and sole guardian of a nonmarital child.”

In a 1940 law, “Congress discarded the father-controls assumption concerning married parents,” but it kept the assumption that an unmarried woman is the sole guardian of her child. This, Ginsburg explains, is the origin of the special treatment for unwed mothers.

Such special treatment, however, is not allowed when it involves gender discrimination. To the contrary, Ginsburg writes, “the Court has held that no ‘important [governmental] interest’ is served by laws grounded… in the obsolescing view that ‘unwed fathers [are] invariably less qualified and entitled than mothers’ to take responsibility for nonmarital children.” The citizenship law at the heart of Morales-Santana is “stunningly anachronistic.”

So that sounds like a victory for equality — and, indeed, much of the Morales-Santana opinion reads like Ginsburg planting her righteous sword in the belly of sexism. But then things take a darker turn.

When a litigant claims that they have been denied their right to equality, Ginsburg explains, “the appropriate remedy is a mandate of equal treatment, a result that can be accomplished by withdrawal of benefits from the favored class as well as by extension of benefits to the excluded class.” Normally, the Court prefers the later to the former. But this is an unusual case.

Unlike most equality suits, Morales-Santana involves a law that applies a relatively harsh rule in nearly all cases, and a more lenient rule in relatively few cases. Congress clearly intended the 10-year rule to be, well, the rule, and the 1-year rule to be the exception.

Under these unusual circumstances, the Court concludes, the proper course of action is to apply the harsher rule universally, rather than rewriting the law to apply the more lenient rule more broadly. That’s bad news for Morales-Santana, as it is bad news for child born abroad to unmarried American mothers for the foreseeable future.

It should be noted that Ginsburg concludes her opinion with a plea to Congress that “going forward, Congress may address the issue and settle on a uniform prescription that neither favors nor disadvantages any person on the basis of gender.” But, with Trump in the White House, it is unlikely that Congress will pass a law any time soon that makes our citizenship laws more lenient.