books The Photographs of the Border

In More Than a Wall / Más que un Muro, labor journalist David Bacon offers a politically rich, bilingual compilation of photographs and oral histories. Corporations know no borders, while they rely on the US-Mexico border to keep wages low... 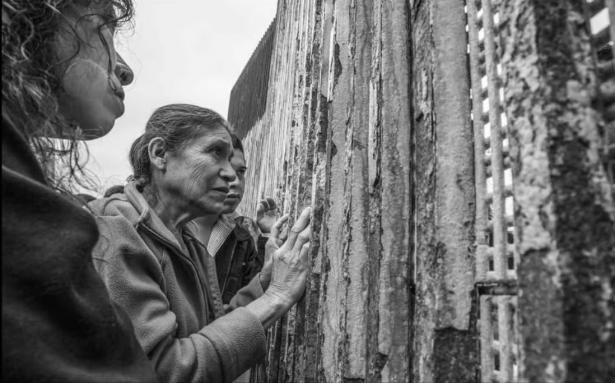 “We died in your hills, we died in your deserts, / We died in your valleys and died on your plains. / We died ’neath your trees and we died in your bushes, / Both sides of the river, we died just the same,” Woody Guthrie sang in his 1948 classic “Deportee” (also known as “Plane Wreck at Los Gatos”). While Guthrie’s song referred to the bracero guest workers imported for California’s harvests between World War II and the 1960s, the bracero program was just one incarnation of the uses of the US-Mexico border.

In More Than a Wall / Más que un Muro, labor journalist and documentary photographer David Bacon offers a lavishly illustrated and politically rich bilingual compilation of photographs and oral histories (as well as Bacon’s own historical and interpretive text) that serves as a fitting update to Guthrie’s song. Many people are still dying in all those places, on both sides of the river/border, and not by chance. Their deaths are the result of the arbitrary and exploitative nature of US-Mexico relations, which pulses through the volume’s narratives and photographs. Corporations know no borders, while they (and US consumers) rely on the US-Mexico border to keep wages low and their profits and US consumption soaring. Mexican institutions collaborate with this system. The expensive and elaborate apparatus of immigration law, border enforcement, detention, and deportation serves to keep Mexicans and other Latin American immigrants working, hard and long, at the margins of the global economy.

But many are also fighting back, organizing and creating webs of solidarity, love, and hope that offer glimpses of a more just world for us all. As maquiladora worker Omar Gil tells Bacon in the book, “Nothing will ever change if we just sit on our hands. You have to keep trying and trying.”

A central theme examined in More Than a Wall / Más que un Muro is the similarity of the environmental and social issues that people on both sides of the border face in their struggles to survive and better their conditions. “The border region,” Bacon reflects, “is actually a single, very complex social fabric. Through it runs the borderline, with its walls. But a wall cannot completely divide and separate the people and communities living here.”

The wall, Bacon explains in a section of the book on the physical aspects of the barrier, “is not just geography, or a wall, or a river. It is a passage of fire, an ordeal that must be survived in order to send money from work in the United States back to a hungry family, to find children and relatives…or to flee an environment that has become too dangerous to bear.” He documents the absurd nature of the structure, its deadly consequences, and the lives of those caught in the web of deportation, separated from jobs and families and surviving on the streets of Tijuana and other border towns.

Those who remain on the Mexican side of the border are also workers in the transnational economy, “a huge part of the industrial workforce, in the production and supply chain that delivers products to U.S. consumers.” The book’s second section, titled “Border Rebellions,” begins in Tijuana, where the maquiladora industry mushroomed as the drastic wage differential, the North American Free Trade Agreement, and company-friendly unions attracted export-oriented multinationals to the city. The Mexican side of the border is poisoned by the toxins of the farms and factories that exploit the flexible environmental regulation and lax enforcement on that side of the wall.

Bacon brings together the photographs he took during an early labor struggle in the Han Young factory as the workers sought to build an independent union and raise wages there. Tijuana became a battleground over the following decades, and the activism there inspired solidarity on both sides of the border. “When those efforts were defeated, as they often were, blacklisted workers, or simply workers who’d lost hope for change, found their place in the huge waves of people crossing the border,” Bacon writes.

More Than a Wall / Más que un Muro also examines the ways in which what happens on the border impacts the rest of Mexico, from the rural villages that many of the migrants came from, to the larger cities and export-oriented industrial farms that have taken over the border region. In these interconnected spaces, workers and migrants organize struggles that go beyond the workplace: struggles for housing, for land, for health care and education, and for what the Binational Front of Indigenous Organizations calls “the right not to migrate.” For the FIOB, this means the struggle for “a government and political system that responds to indigenous communities, to farmers, and to other workers.” With chapters in remote Indigenous communities, in the export-oriented farms and maquiladoras near the border, and in California, the FIOB confronts the same global forces that affect migrants and non-migrants. Border barrios with names like Derechos Humanos and Fuerza y Libertad reflect how the workers’ struggles are also tied to other regional leftist organizations and parties, including the revolutionary Zapatista autonomous communities in Chiapas.

Perusing the photographs in More Than a Wall / Más que un Muro feels like entering a museum exhibit in which visual items, arresting in and of themselves, take on new layers of meaning and understanding when explained by the captions that accompany them. In this case, the images and captions are interwoven with first-person testimonies and with Bacon’s analysis and reflections on his life as an activist photojournalist. Even the way that the English and Spanish versions of the text are laid out on the page draws the reader into the tangled threads that connect the two sides of the border. Some pages put the two languages in side-by-side columns, others on side-by-side pages.

The haunting black-and-white images of migrant workers, families, and especially children call to mind the early-20th-century and Depression-era photographs by Lewis Hine, Dorothea Lange, and Walker Evans. But Bacon’s photographs are not about some distant past. The captions, text, and oral histories make it clear: The labor exploitation, poverty, violence, and repression are a product of neoliberal free trade. Furthermore, the book’s focus is on struggle, mobilization, and resistance as much as it is on human suffering. Photographing protests, Bacon insists, “helps reinforce the idea that people can fight…and the images can be and are used to inspire people in other places to organize their own efforts to stop this inhumane system.”

For all its impact in the public and even the policy sphere, Dorothea Lange’s most famous photograph, Migrant Mother, was clearly the work of an outsider rather than a participant. The subject of the picture herself protested, years later, that the photographer had taken the picture and used it without her permission and without speaking to her, and had both invented and erased details of her life—one of the latter being that she was Native American. Bacon’s relationship to his subjects is different: He has been an active participant in these communities and their struggles over the course of many decades, and he uses his photography as a tool for organizing.

While it feels almost petty to quibble with a work as stunning and powerful as this one, there are two thorny issues that I wish Bacon had developed further. While he clearly critiques Mexico’s officialist unions and their failure to protect or represent workers, he is gentler on US unions, including the AFL-CIO and United Farm Workers, whose histories are, to say the least, complicated. The AFL-CIO and even, to a lesser extent, the UFW were slow to support the full rights of immigrant—and especially undocumented—workers, and the AFL-CIO continues to this day to align its foreign policy agenda with that of the State Department, rather than fostering democratic debate in the organization about what a real pro-labor global order would look like. Bacon highlights instead their also-real moments of solidarity and support for migrant workers and their struggles.

I would also have liked to see more about the lives and struggles of Indigenous peoples on and north of the border. The photographs and testimonies delve deeply into the experiences of Mexico’s Indigenous, their reasons for migration, and the complicated histories of exploitation, racism, and marginalization, but I would have loved to see a comparable acknowledgment of the complexities of Indigenous communities north of the border and how these histories intersect. A section on Joaquín Murrieta, for example, follows a classic Chicano nationalist narrative that posits mestizo “Mexicans” as the descendants of the Southwest’s original inhabitants, eliding the presence of the region’s Indigenous peoples. The Chicano narrative emphasizes that “Mexicans coming north today as immigrants are returning to a land from which most Mexicans were expelled a century and a half ago.” Theirs is “a history of dispossession,” Bacon writes. Yes, but much of that land was “Mexican” in name only, since the majority of the population consisted of unconquered Indigenous peoples to whom the Spanish, Mexicans, and Anglos all brought waves of conquest and dispossession, and whose descendants still inhabit the border region to this day.

As the former UFW president Arturo Rodriguez put it: “The wealth of the agricultural industry has been built on top of the suffering of generations of farmworkers, from direct abuses in the fields to degradation of the land and environment.” Bacon’s More Than a Wall / Más que un Muro is a clarion call to witness, to denounce injustice, and to fight for change.

[Aviva Chomsky is a professor of history and the coordinator of Latin American studies at Salem State University in Massachusetts. Her most recent book is Undocumented: How Immigration Became Illegal (Beacon Press, 2014).]