Oskar Eustis, director of a mesmerizing Public Theater staging of Shakespeare’s play about taking down an incipient dictator, says that “Julius Caesar can be read as a warning parable to those who try to fight for democracy by undemocratic means. To fight the tyrant does not mean imitating him.” This Delacorte Central Park enactment may be one of the best of the plays inspired (or provoked) by the election and presidency of Donald Trump. 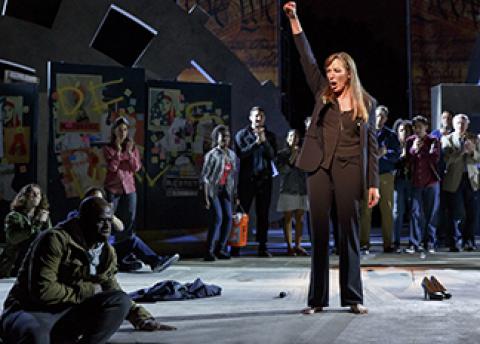 Elizabeth Marvel as Marc Antony and company.,photo Joan Marcus // The Komisar Scoop
So here is Caesar (Gregg Henry), with blonde hair and Trump demeanor, having returned from triumph at war and manipulating to get himself appointed emperor. Brutus (Corey Stoll) gets an email: “Brutus thou sleepest, awake.”
And, with a backdrop of the Capitol and blowups of Lincoln and Washington and the preamble to the Constitution – “We the people…..” — members of the Senate, led by Brutus and Cassius (the always brilliant John Douglas Thompson), plot to kill him to prevent a dictatorship. 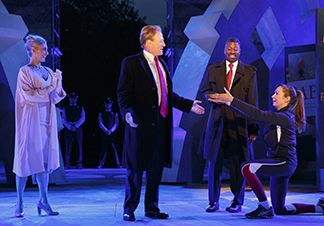 Tina Benko as Calpurnia, Gregg Henry, Teagle Bougere as Casca and Elizabeth Marvel as Marc Antony.
photo Joan Marcus // The Komisar Scoop
They all are “men in suits,” including women with black patent heels. Marc Antony is the equally intense Elizabeth Marvel. This play is worth seeing for Thompson and Marvel, among the great stage actors of the moment.
And they have support among the masses, who appear with banners and arm bands that say “resist” and wear pink pussy hats.
We see Caesar in a suit and long red tie, smoking a cigar. He seems solitary, self-involved. His wife Calpurnia (Tina Benko) wears a pink silk gown and has blonde hair and a Slovenian accent. (Laughter) She is army candy. Pun intended. At one point he wordlessly touches his hand to her crotch. Later, in the same gown, she gets into a silver bathtub with him and they are snuggling, kissing. 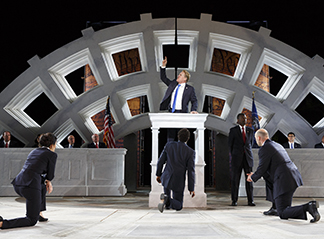 Gregg Henry as Caesar and company.
photo Joan Marcus // The Komisar Scoop
The soothsayer, with a white “Anonymous” mask, has warned of the augured danger of the Ides of March, March 15th. It’s the day he should go to the Senate. He shouts that Caesar shall not go to the Senate. (Laughter, applause).
But he will not be cowed. He gets out of the bath, his naked posterior on view. And into a white terrycloth robe. And he will go. (Trump has agreed to testify; is this prescient?)
Back in the Senate, a white sculptured legislative chamber with a large podium, are men in suits, women with black patent heels. And there’s a leather folder of knives.
Suddenly, the conspirators stab him in turn, and, with the famous “E tu, Brute,” he falls, and they proclaim, “Liberty, freedom. Tyranny is dead.”
Now comes strategy, and the Brutus and Cassius make the wrong choice. Marc Antony wants to speak at the funeral. Cassius tells Brutus it’s not a good idea. They allow it on grounds she has agreed not to accuse them. But when they depart, she makes a prophesy of war and destruction: “Cry havoc and let slip the dogs of war.” 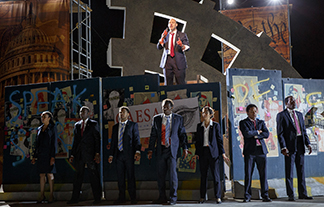 Corey Stoll as Brutus.
photo Joan Marcus // The Komisar Scoop
First Brutus gives a speech. He asks the masses if they would be slaves. “Had you rather Caesar were living, and die all slaves, than that Caesar were dead, to live all freemen? As Caesar loved me, I weep for him. As he was fortunate, I rejoice at it. As he was valiant, I honor him. But, as he was ambitious, I slew him. There is tears for his love, joy for his fortune, honor for his valor, and death for his ambition. Who is here so base that would be a bondman?”
The gathering shouts “Brutus, Brutus.” But as Marc Antony walks towards them and in a subtle Southern accent delivers her oration, they turn to an excited mob.
In the famous speech, she repeatedly refers to the conspirators with irony as “honorable men.” And she reads what she says is Caesar’s will, where everything is left to the people. “To every several man, seventy-five drachmas.” The masses cry “Revenge! Seek! Burn! Fire! Kill! Slay! Let not a traitor live!” Ah, demagoguery. Ah, fake news.
And things turn dirty. Cina the poet is beaten to death by police who mistake him for Cina the senator. Decisions are made to execute the conspirators. Marc Antony orchestrates events with a mobile phone. We hear shots and see victims fall.
Away from the carnage, visiting Cassius in his apartment, Brutus accuses him of having an itchy palm, of taking bribes. There is a “resist” poster on the wall and a band on Brutus’ arm. Shakespeare knew of the corruption of revolutionaries. Then and now.
Outside, “resist” protestors are attacked by helmeted troops with truncheons. So, we see that and are for the resistance. They shout, “The people united will never be defeated.” It’s a 1980s rhythmic rhyming Central American slogan, “El pueblo unido jamás será vencido,” pronounced then by the populace against the U.S. government-supported death squads fighting opposition to oligarchs in El Salvador and Nicaragua. As the conflict escalates, the troops appear with shields and guns. 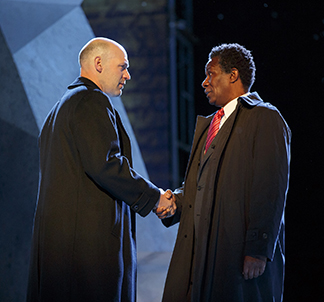 Corey Stoll as Brutus and John Douglas Thompson as Cassius.
photo Joan Marcus // The Komisar Scoop
As they fear the tide has turned, Brutus and Cassius will die by their own choice. Victorious Octavius Caesar takes a mobile phone photo to commemorate his triumph.
Repeat what Eustis says: “Julius Caesar can be read as a warning parable to those who try to fight for democracy by undemocratic means. To fight the tyrant does not mean imitating him.” That could be the peaceful Arab spring protests in Egypt that were hijacked by Islamists. Or the military anti-colonial fights in Africa that led to new dictators and oppression. Quite a stretch to say it’s about people protesting against Donald Trump. But it makes a lively play!
But to make you think maybe it’s really not a stretch, Delta Airlines and the Bank of America were so offended by the Caesar’s likeness to Trump, that they announced they were pulling their funding of the production. In fact, Delta announced it was ending its support of the Public Theater altogether because the play didn’t reflect its “values.” The bank complained that the play aimed to “provoke and offend.” So Delta and Bank of America stand with Marc Antony! Who are these acolytes of Caesar?
What is an itchy palm when it’s defined as “quid pro quo?” Delta, along with other U.S. airlines who don’t like competition, has been lobbying the Trump administration to stop the U.S. expansion of three Middle Eastern airlines because, they say, they get subsidies from their governments.
Here is how the U.S. subsidizes Delta: government funds that pay aviation infrastructure, military contracts for U.S. airlines, a Pentagon flight academy that trains pilots and technicians for American carriers, subsidies for airlines serving rural communities, requirements that federal agencies use U.S. carriers, the airline bailouts after 9/11, anti-trust immunity, easy bankruptcy provisions allowing airlines to cut debts and freeze wages, privileged access to airport slots, plus Delta bought a stake in a marketing partner China Eastern heavily subsidized by the Chinese. Are you offended? See Bill McGee in USA Today.
Or if it means corruption bailed out by taxpayers? Bank of America, in July 2008, bought the giant mortgage lender Countrywide Financial, which was becoming notorious for pushing borrowers, especially minority customers, into predatory loans. Its due diligence would have shown that this scam made lots of money.
When mortgages tanked later in 2008, it got a massive $25 billion federal bailout, then had to pay billions of dollars to settle lawsuits relating to crooked behavior in mortgages and mortgage-backed securities. In May 2011, the bank reached a $20 million settlement of Justice Department charges that Countrywide had wrongfully foreclosed on active duty members of the armed forces without first obtaining required court orders. And in December 2011 the bank agreed to pay $335 million to settle charges that Countrywide had discriminated against minority customers by charging them higher fees and interest rates during the housing boom. Are you offended yet? For more, go to the Corporate Research Project.
The hypocrisy works so perfectly. Eustis’s take on this 17th century play deserves a life beyond the Delacorte.
“Julius Caesar.” Written by William Shakespeare, directed by Oskar Eustis. The Public Theater at the Delacorte Theater in Central Park, entrance E 79th or W 81st Streets, New York City. 212-539-8500. Opened June 12, 2017; closes June 18, 2017.
Oskar Eustis on Trump, 'Julius Caesar' and the Politics of Theater
By Michael Paulson
June 13, 2017
New York Times 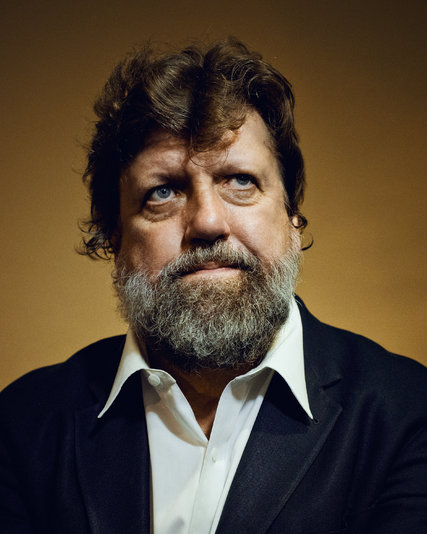 Oskar Eustis, artistic director of the Public Theater.
Ryan Pfluger for The New York Times
The Public Theater’s Shakespeare in the Park production of “Julius Caesar” opened on Monday night under unusual circumstances: A firestorm of criticism from the right over the use of an actor styled as President Trump to portray Caesar, and then knifed to death as part of the story, led three major corporate donors to distance themselves from the show.
After the opening-night performance, and before the party that followed, Oskar Eustis, artistic director of the Public and director of the “Julius Caesar” production, sat down in the Delacorte Theater for a few minutes to answer questions about the matter.
Read more here.
Subscribe to Portside