In New York City, Fast-Food Workers May Soon Have a Permanent Voice

With the help of a new municipal law, a new advocacy group seeks to become an organizing model for low-wage workers. 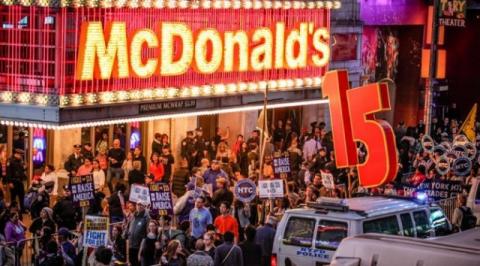 Thanks to one of a handful new labor laws passed by the New York City Council and signed by Mayor Bill de Blasio late last month, the roughly 65,000 fast-food workers employed across the five boroughs will soon have their own advocacy group—with the hopes of growing it into a self-directed, member-funded organization.

This first-of-its-kind law requires fast-food employers to give their employees the option of deducting contributions from their paychecks that would go to a qualified nonprofit that will in turn provide services for and advocate on behalf of its members. Unlike a union, the nonprofit will be forbidden by federal law from bargaining issues like wage levels directly with employers, but it will be able to advocate for a host of issues that affect its members—much as the Fight for 15 did when it persuaded New York state to raise their minimum wage to $15.

In response to the law’s passage, labor advocates are launching a new nonprofit, Fast Food Justice, with hopes that it will become an advocacy resource for workers who not only are employed in an industry rife with paltry wages, labor violations, and constant turnover, but face a slew of other systemic obstacles every day.

“The goal is to have an organization that can approach fast food workers’ lives in a holistic way and build upon the work already done [in the city] to advocate for these workers,” says Tsedeye Gebreselassie, who is a Fast Food Justice board member. “In these difficult times when low-wage and immigrant communities are under increasing attack, this is more important than ever.”

Gebreselassie says the group will do traditional labor advocacy, like educating workers about the city’s new labor laws and protections—from the minimum wage and paid sick leave to fair scheduling—and pushing for further advances in the industry. But it will also go beyond the workplace, providing services and advocacy on other issues fast-food workers deal with every day, including deportation raids, police violence, and affordable housing.

The new payroll deduction law could pave the way for a new, more sustainable, model for organizing workers at the sectoral level. It would go beyond the traditional labor-union strategy of organizing by store or employer, which can be especially difficult in industries like fast food where there’s a lot of employee churn from one location or employer to another. Under the new law, if a worker leaves her job at McDonald’s in lower Manhattan for a new position at a Burger King uptown, she can still remain a member. After all, the conditions of employment at Burger King and McDonald’s aren’t all that dissimilar.

Walker says coworkers will often come in for a scheduled shift only to be told by a manager that they can’t clock in—their hours were cut. “It’s disgusting,” Walker says. “They make schedules and then don’t let people work the schedules they’re supposed to work. We deserve to make money just like they are.”

Payroll deductions have long been an important mechanism for creating sustainable funding sources, says Catherine Fisk, a labor law professor at the University of California, Irvine, pointing to labor unions and health insurers alike that have used them to generate automatic payment for services. “It’s even more important in low-wage worker sectors where there’s high turnover, because those people are often unbanked. They don’t have bank accounts or checking accounts; they operate at margins of the regular financial system.”

“If you want to come up with an entity that can provide services to help them—and help employers make those jobs decent jobs—you have to have a way to collect money for the organization that provides services to the employees,” Fisk adds.

The law, which goes into effect in November, requires that a minimum of 500 workers sign up before a nonprofit can qualify for the automatic payroll contributions. Fast Food Justice is officially launching this coming week and will soon begin recruiting workers to sign up as members.

The priorities, strategy, and structure of the organization are still unclear, but organizers say it will become clearer once members are surveyed about their needs. In the meantime, the nonprofit’s three board members, all from leading labor organizations, will get the group off the ground. Gebreselassie is a senior staff attorney from the National Employment Law Project; Ana María Archila is co-director of the community-organizing group Center for Popular Democracy; and Kevin Doyle is a former union organizer and official, including with SEIU 32BJ, which represents workers in New York City.

As the power of labor unions has continued its decades-long nosedive—driven by the evisceration of key American industries, hastened by a sophisticated and well-funded attack from conservative ideologues, and cemented by systemic gutting of the country’s labor laws—the labor movement has scrambled to come up with alternative ways to organize and build power among workers.

One common route in recent years has been workers centers, which organize, educate, and advocate for workers—especially in marginal areas of the economy—while fighting to attain worker gains outside of the scope of traditional collective bargaining agreements. However, while these types of groups are responsible for some of the most promising wins in the labor movement in recent years, they have struggled to secure sustainable funding streams from members alone. Instead, they’ve relied on money from foundations with often-fickle priorities and unions with ever-limited resources.

The Fight For 15 has struggled with this, too. The Service Employees International Union (SEIU) has poured millions of dollars into the organization without getting one dues-paying member in return. SEIU President Mary Kay Henry has reiterated the union’s commitment to funding the Fight for 15, but that may be easier said than done. Bloomberg reported late last year that SEIU planned to cut its overall budget by 30 percent, in anticipation of further attacks on unions from the Trump administration and the Supreme Court.

If Fast Food Justice succeeds in building a large base of contributing members, aided by the new city law, it would effectively signal a big first step toward transforming the Fight for 15

If Fast Food Justice succeeds in building a large base of contributing members, aided by the new city law, it would effectively signal a big first step toward transforming the Fight for 15 into a more autonomous, self-sustaining movement.

The Fight for 15 first began in 2012 when fast-food workers in New York City walked off the job, demanding a living wage and the right to a union. Since then, the movement has spread like wildfire across the country and pressured state and municipal lawmakers to dramatically hike up minimum wages—and, eventually, for the national Democratic Party to embrace a $15 minimum wage as a core policy position.

As the movement has mobilized more and more workers, New York City has continued as its epicenter, implementing a progressive agenda squarely aimed at improving the quality of life for the city’s low-wage workers. Feeling its pressure, New York Governor Andrew Cuomo enacted a $15 minimum wage for the state’s fast-food workers in 2015 before, with the legislature, he expanded it to all workers in 2016.

In the city proper, the council, in tandem with the mayor de Blasio, have followed up their enactment of a paid sick leave ordinance with an ambitious “Fair Workweek” package, which requires fast-food employers to provide a two-week advance notice of employees’ schedules, regulates the practice of making employees work both opening and closing shifts, and prohibits “on-call” shifts at large retail outlets. The final element of the Fair Workweek package was the payroll deduction law.

Walker says she hopes the Fair Workweek policies will make fast-food employers provide their employees with the flexibility and security that they often promise when hiring—and she’s excited to get involved with Fast Food Justice, which she’s confident will help “tackle all of that.”

“It’s not just about being a fast-food worker; we’re a part of communities,” Walker says. “We want our voice to be heard and united.”

Justin Miller is a writing fellow for The American Prospect. Follow @by_jmiller