A writer tells the story of his left wing family. Reviewer Scipes takes us on a tour. 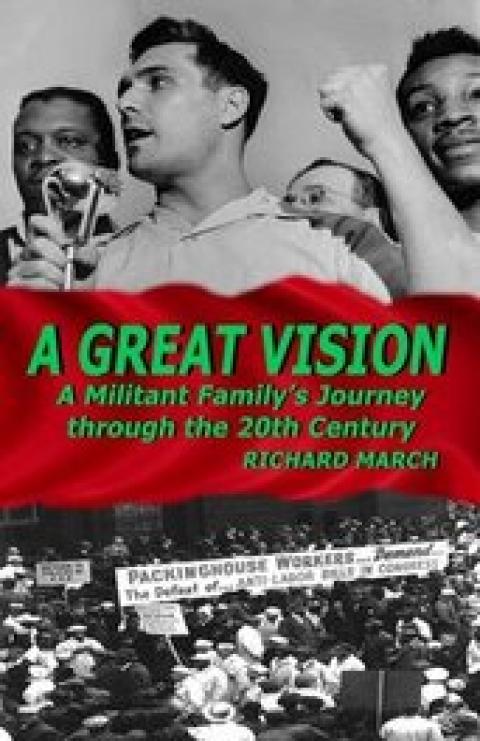 Political activism affects individual lives profoundly. Once a person becomes politically conscious—no matter how it happens—it opens up new worlds to you, while it can distance you from your previous life. But how does it affect one’s life when that’s all you know?

This is a book that, ultimately, revolves around the lives of Herb and Jane March, and especially their time in Chicago. Herb March had been a key activist in organizing what became the United Packinghouse Workers of America, while Jane March had helped build the Back of the Yards Neighborhood Council, a community organization that was important in developing support for the packinghouse workers’ union and which helped give a start to Saul Alinsky’s community organizing career. It is written by Richard March, Herb and Jane’s third child.

Although it contains material on five generations, the book focuses on three generations of people: Jane’s family, who lived in the Croatian village called Nerezine on the Adriatic island of Losinj, and which immigrated to Chicago in the 1920s; Jane and Herb and their family in Chicago during the 1930s until the early ‘50s, and then, Southern California; and Richard’s life, mainly in California—including time at Berkeley in the mid-to-late 1960s—and then later in Wisconsin (now, in his early 70s and retired as the Wisconsin State Folklorist, he lives with his wife, the historian Nikki Mandell, in Portland).

This story, as Richard states, “is a story, a saga, a tale.” It is a saga of a group of people who sought to make the world a better place for all. It is the story of a political family, real people who were engaged in the struggle for economic and social justice. Richard well captures the essence of the book:

“There are many histories of American radical and labor movements by professional historians. These works present well-documented and good analysis. There are also sundry memoirs by radicals who recalled the stirring events of their lives. What the histories and even the memoirs seldom convey, however, are the personalities and habits of the people and the tenor of family life in those movements. As a family of radicals, we had our daily routines, just like other people. We established our homes, cooked meals, went to movies, sang songs and enjoyed other simple pleasures. We raised our kids, sent them to school, read them stories, sang ‘Happy Birthday’ and blew out the candles. And in the process we passed through generations our values and the great vision that inspired us.

“The family stories that comprise this book, some gripping, some commonplace, described and gave meaning to our lives. They convey the normality of real people, living day-to-day immersed in a movement for social justice.”

Yet, Richard accomplishes more than just telling the family stories. He places them in the social-political context of the times, and shows their relevance to all Americans. Thus, this story is not just about Chicago or Los Angeles or Berkeley; it is a history of Southern European immigrants and their descendants, and their impact on the United States as well as other parts of the world.

Richard starts with Nerezine, the village in Croatia that later was turned over to Italy, and how his grandparents resisted the Italians. He traces their roots to Chicago (and three uncles later left the US and immigrated to the Soviet Union during the Depression). He talks about their suffering during the Depression, and how they were ultimately fleeced out of their money by a crooked bankster. But their values, of treating people with respect, of seeking social justice, of working for the good of all, were passed down through their daughter, whose Americanized name was Jane. This material is interesting, as I know little about Croatia or its people who immigrated to the US, and how they were treated.

Herb is a Brooklyn-born Jew, who has a passion for social justice, and joins the Young Communist League (YCL). Recognizing that the name Fink has bad connotations for a labor organizer, Herb changes his last name from Fink to March—apparently a calendar that he saw was turned to that page and he adopted it—and gets sent to the Midwest to do labor organizing during the early 1930s.

While there, he meets Jane, they get married in Kansas City and then move to Chicago. Herb and some YCL comrades get active in efforts to organize the packinghouse workers. Herb had long been an anti-racist activist and knew that organizers had to confront the white supremacy that was accepted by the (mostly) foreign-born white workers. But as Richard points out, the challenge to white supremacy and racism often was challenged in ironic ways. He reports

“Race relations among packinghouse workers were advanced by a surprising happenstance. To accommodate Polish-American workers, some union meetings were conducted in Polish. A popular speaker at these meetings was John Hackett, an African-American hog butcher who spoke fluent Polish. He learned the language during World War I, as a prisoner of war. The American Army was segregated. The captured white American officers objected to Hackett’s presence among them, so the Germans sent him to a camp with Polish prisoners. It was language immersion and Hackett learned well.”

But he also talks about Jane’s work as a community organizer, along with several other Communist women. These were the efforts that led to the development of the Back of the Yards Neighborhood Council. Alinsky rode in on this, claiming a lot, but Richard shows that his success was based on the women’s work. Somehow, the anti-Communist Alinsky never gave much credit to his mentors.

Richard also mentions the two assassination attempts against his father, Herb. Seems the Armour Company wasn’t too thrilled with him, so they apparently recruited some mobsters to do Herb in. They barely missed the first time, but wounded him the second.

Herb was on the frontlines of labor organizing in Chicago. He was in the forefront of the marchers in what became known as the “Memorial Day Massacre” at Republic Steel in South Chicago in 1937. Being knocked down by a cop probably saved his life; he went down just before the police started shooting, eventually killing 10 marchers and wounded over 90, including a number of women and at least one child 10 years of age. [But all of our students are taught about this and the Haymarket Affair as part of Chicago and US history—aren’t they?]

Betty Balanoff, who knew Herb, once told me he that while he was well-known in Chicago and the packinghouse workers’ union, he wasn’t well-known nationally. She claimed that he was one of the finest organizers in the CIO.

The war years brought Herb to prominence as a labor leader/organizer, while Jane worked in a Studebaker plant, making aircraft engine components.

Herb’s relationship with the Communist Party (CP) was shaky. The Party was trying to get him to act according to their idea of how he should act, while he was successfully organizing packinghouse workers and helping to create the most resolute anti-racist union in the CIO. He tended to ignore them. Ultimately, he was thrown out of the CP cell in the union, charged outlandishly with “white chauvinism.”

At the same time, passage of the 1947 Taft-Hartley Law affected him. The union removed him as District Director, but he worked for several more years with the union, as a national staff member and then as an organizer for Local 347, the local at Armour he had fought so hard to build. Finally, he and Jane left Chicago, and relocated to Los Angeles.

Although living in Hollywood and in a cultural milieu that was favorable, Herb March was never so engaged with the world as he had been in Chicago. Jane flourished, and became involved with numerous activities, especially in the Croatian-American community. But there, the saga shifts to Richard.

Despite preferring Chicago, Richard March spent his high school years in Los Angeles. He started college at UCLA, but later moved to Berkeley, where the action was. He was a member of Agit-Prop, a cultural group that did street theater in support of goals of the left. But he also worked summers in the fields, and helping with organizing efforts there. After keeping himself from being drafted, he returned to Nerezine, his mother’s original home, and studied the people and their customs. This led to a Ph.D. through Indiana University, and later to become the State Folklorist for the State of Wisconsin.

Richard ends the book with a great story. He talks about his niece, Sara March. Sara got involved in “tree sitting” in Northern California in the early 1990s, where activists occupied platforms high above the ground in redwoods, trying to keep loggers from felling them. In one tree, she met another tree sitter, Steve Brown. As Richard tells it, “As they got acquainted Sara mentioned that her grandfather Herb March was a radical leader in the packinghouse workers’ union. Steve rejoined that his grandfather Archie Brown likewise had been a radical union leader, in the West Coast longshoreman’s union.

“On Sara’s next visit to her grandmother in San Pedro, she mentioned that she had been tree-sitting with Steve Brown, Archie Brown’s grandson. ‘Oh my god,’ Mom exclaimed. ‘Archie Brown was in the YCL with me back in Chicago. In fact, he asked me to marry him around the same time that Herb did. It was no question though,’ she continued. ‘I though Herb was much better looking’.”

I think this is a fascinating book. Richard March tells a story very much from the inside of a family involved in some of the great struggles of our time, especially in Chicago. His writing is very captivating; I found myself wanting more of each generation, but then I got to the next and largely forgot about the preceding one. He is never pretentious, nor does he skim over problems of Communism, the Soviet Union or the US Left; in fact, he has some fascinating material about his uncles who emigrated to the Soviet Union during the Depression to join the Seattle Commune. He talks about his parents being “blacklisted,” and talks about how the FBI would periodically park outside their home in LA. He also has some interesting things to say about some of the media “personalities” of SDS in Berkeley.

My only complaint is a very minor one. He tells this as a story, a narrative, but doesn’t generally refer to his sources while he writes. I don’t really find his general bibliography in the back to be that helpful, as I’d love to be able to locate other accounts of what he talks about so I can understand better. I’d also like to be able to verify his accounts; good oral history should provide substantive material to support it. However, I recognize that I’m an academic who details sources much more than March does, but it won’t matter, I think, to most readers.

I also think—and hope!—this is a precursor to even more oral histories to come, as the “Vietnam generation” retires, and tells their stories of the “60s”: there are a lot more stories out there awaiting to be told.

Kim Scipes is currently teaching in Ho Chi Minh City in Vietnam. He is a long-time labor and political activist, and member of the National Writers Union, UAW #1981, based in Chicago. A prolific author himself, Scipes’ latest book is collection he edited and contributed to titled Building Global Labor Solidarity in a Time of Accelerating Globalization (Haymarket Books, 2016). Scipes works as an Associate Professor of Sociology at Purdue University Northwest in Westville, Indiana. His next book project—comparing unionization in steel and meatpacking in the Chicago area (including Northwest Indiana) between 1933-55, and examining how each union dealt with white supremacy and racism in the workplace, union and community—is currently under consideration by a publisher.