Carter, known as Jay Z, is a lauded recording artist, philanthropist and father: "When black and brown people are over-policed and arrested and accused of crimes at higher rates than others, and then forced to pay for their freedom before they ever see trial, big bail companies prosper. This pre-incarceration conundrum is devastating to families." 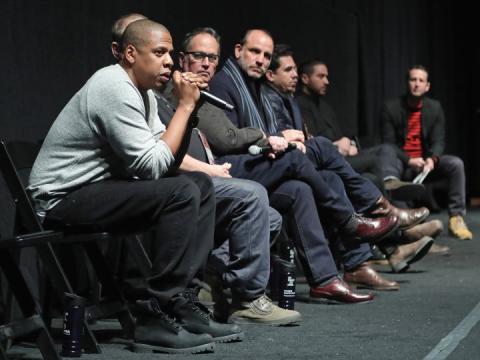 Seventeen years ago I made a song, "Guilty Until Proven Innocent." I flipped the Latin phrase that is considered the bedrock principle of our criminal justice system, ei incumbit probatio qui dicit (the burden of proof is on the one who declares, not on one who denies). If you're from neighborhoods like the Brooklyn one I grew up in, if you're unable to afford a private attorney, then you can be disappeared into our jail system simply because you can't afford bail. Millions of people are separated from their families for months at a time — not because they are convicted of committing a crime, but because they are accused of committing a crime.

Scholars like Ruthie Gilmore, filmmakers like Ava Duvernay, and formerly incarcerated people like Glenn Martin have all done work to expose the many injustices of the industry of our prison system. Gilmore's pioneering book, The Golden Gulag, Duvernay's documentary 13th and Martin's campaign to close Rikers focus on the socioeconomic, constitutional and racially driven practices and polices that make the U.S. the most incarcerated nation in the world.

But when I helped produce this year's docuseries, Time: The Kalief Browder Story, I became obsessed with the injustice of the profitable bail bond industry. Kalief's family was too poor to post bond when he was accused of stealing a backpack. He was sentenced to a kind of purgatory before he ever went to trial. The three years he spent in solitary confinement on Rikers ultimately created irreversible damage that lead to his death at 22. Sandra Bland was also forced to post bail after her minor traffic infraction in Prairie View, Texas, led to a false charge of assaulting a public servant (the officer who arrested her was later charged with perjury regarding the arrest). She was placed in a local jail in a pre-incarcerated state. Again, she was never convicted of a crime. On any given day over 400,000 people, convicted of no crime, are held in jail because they cannot afford to buy their freedom.

When black and brown people are over-policed and arrested and accused of crimes at higher rates than others, and then forced to pay for their freedom before they ever see trial, big bail companies prosper. This pre-incarceration conundrum is devastating to families. One in 9 black children has an incarcerated parent. Families are forced to take on more debt, often in predatory lending schemes created by bail bond insurers. Or their loved ones linger in jails, sometimes for months—a consequence of nationwide backlogs. Every year $9 billion dollars are wasted incarcerating people who've not been convicted of a crime, and insurance companies, who have taken over our bail system, go to the bank.

Last month for Mother's Day, organizations like Southerners on New Ground and Color of Change did a major fundraising drive to bail out 100 mothers for Mother's Day. Color of Change's exposè on the for-profit bail industry provides deeper strategy behind this smart and inspiring action. This Father's Day, I'm supporting those same organizations to bail out fathers who can't afford the due process our democracy promises. As a father with a growing family, it's the least I can do, but philanthropy is not a long fix, we have to get rid of these inhumane practices altogether. We can't fix our broken criminal justice system until we take on the exploitative bail industry.