Melissa Harris-Perry: How to Save the N.A.A.C.P. From Irrelevance

Today, the N.A.A.C.P. carries the weight of history and burden of bureaucracy. But it does not seem willing to shed blood, literally, or in terms of the uncomfortable work that characterizes effective activism. 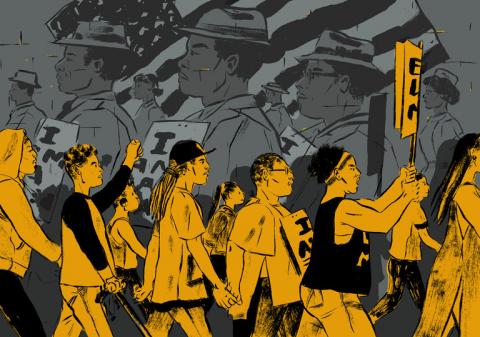 The N.A.A.C.P. announced two weeks ago that it will replace its current president as part of the latest effort to revitalize itself. That won’t solve the problem. Instead, it shows that its bloated 64-member board of directors has little understanding of why the N.A.A.C.P. has become marginal.

One night in June 1940, police in Brownsville, Tenn., dragged Elbert Williams from his bed, beat him, shot him in the chest and dumped him in the Hatchie River for the transgressions of helping to form a chapter of the N.A.A.C.P. and trying to register voters. On Christmas Day 1951, a Ku Klux Klan bomb ripped through the bedroom of Harry Moore, the director of the Florida N.A.A.C.P., killing him and his wife, Harriette. In June 1963, the white supremacist Byron De La Beckwith murdered Medgar Evers, a field secretary for the group, in the driveway of his home, in Jackson, Miss.

Those were the bloody years.

Southern states outlawed the organization by decree. White Citizens’ Councils enforced unofficial bans by lynch mob. To attend a meeting or sign a membership list required unusual courage. But ordinary black folk chose to do so because the group worked in solidarity with the most vulnerable people in the struggle against white supremacy.

Today, it is safe to be a member of the N.A.A.C.P. It is also inconsequential.

Cornell William Brooks, the group’s outgoing president, was a high-profile leader. He championed progressive issues and was never embroiled in a personal or organizational scandal. He was a good steward of the organization, but he alone could not transform it. Perhaps no leader can, no matter how charismatic. There are many reasons for this, but key among them is that, over time, this stalwart of civil rights groups has become an entrenched bureaucracy.

Consider the tasks of the people who lead the N.A.A.C.P.’s more than 2,000 local units. Of course they care a great deal about justice and inequality. But on a daily basis they are consumed with mundane projects like collecting dues, sending emails, covering payroll and ensuring compliance with nonprofit tax status.

North Carolina is home to the only branch that has mounted a sustained social movement with a national impact in recent years. Under the leadership of the Rev. Dr. William J. Barber II, hundreds of North Carolinians have called for voting rights, higher wages, L.G.B.T.Q. equality and gun control at the Moral Mondays protests. And along with its legal partners, the branch successfully challenged the state’s monster voter-suppression law.

But Mr. Barber announced this month that he will step down from his role to organize a poor people’s campaign like the one the Rev. Dr. Martin Luther King Jr. was building when he was killed. Most revealing is Mr. Barber’s apparent belief that this social-justice work could not be done within the framework of the N.A.A.C.P.

Today, the N.A.A.C.P. carries the weight of history and burden of bureaucracy. But it does not seem willing to shed blood, literally, or in terms of the uncomfortable work that characterizes effective activism. Compare that with Black Youth Project 100, a part of the constellation of liberation organizations that has emerged in the past few years, along with the Dream Defenders and the Black Lives Matter Network.

BYP100 started from a meeting of young people in Chicago who were discussing how to build sustainable actions beyond electoral politics. That’s what they were doing the night a Florida jury handed down a not-guilty verdict in the murder trial of George Zimmerman.

The trauma of that moment laid bare the bloodiness of their lives. Each of them, born well after the end of Jim Crow and decades after passage of the Voting Rights Act, was sitting in the hometown of the nation’s black president. That night they grieved something that has become routine — young black people being killed with impunity.

Communities engaged in struggle need organizations like BYP100. Its membership is group-centered in the tradition of the civil rights organizer Ella Baker. BYP100 shares its campaigns, actions and public-policy agendas online and on social media. And it focuses on grass-roots organizing and youth leadership development. This allows it to respond to moments of crisis and also to build a long term infrastructure.

Youth-led groups fighting for black lives are on the rise, while the bloody years of the N.A.A.C.P. are long over. Installing a new president while “retooling” and “refreshing” will only deepen the problem.

If it wants to survive, the N.A.A.C.P. has two options. It can move aside gracefully. Legacy civil rights organizations should have emeritus status just like professors. They should be acknowledged for their past work and allowed to make meaningful contributions in the future. But, in the present, they should step to the side.

The time, talent and financial resources available for doing high-impact racial-justice work are severely limited. The urgency of this political moment makes it a moral imperative to direct these resources toward organizations that will produce meaningful outcomes for ordinary people, not just pursue institutional durability.

If the N.A.A.C.P. is unprepared for emeritus status, it must be ready for a return to the bloody years. It must become radical and expect a time when people will be mocked and potentially even harmed simply for being aligned with it.

This will happen only if the organization commits itself to making substantive change that disrupts the balance of power for the most vulnerable. To get there, the N.A.A.C.P. must search for its new president not in the highest places, but rather in the lowest.

Is the N.A.A.C.P. ready to follow the leadership of undocumented women? Queer women? Black women? Is it ready to listen to those who have been incarcerated? Those who are H.I.V. positive? Is it ready to have as its president a young person just out of foster care who, because he is transgender and black, lived with vulnerabilities many can’t imagine?

These are the kinds of leaders capable of offering a radical new direction for an organization that has been irrelevant for far too long.

Melissa Harris-Perry, a professor in the department of politics and international affairs at Wake Forest University, is the founding director of the Anna Julia Cooper Center.