As a result nurses are working endless additional shifts usually without rest. In fact, 3,940 times in the past 12 months nurses had to work for longer than 12 hours because there was no one to relieve them.

Greenfield, Mass – The registered nurses of Baystate Franklin Medical Center, represented by the Massachusetts Nurses Association, have issued the required 10-day notice today of their intent to conduct a one-day strike to protest bad faith bargaining by the employer on June 26, 2017.

The key issues behind the dispute include management’s continued refusal to bargain over workload and staffing, including the nurses’ call for an increase in RN staffing at the hospital to ensure safe patient assignments and an end to management’s continued use of unwanted overtime, increased weekend work and unscheduled shifts as a staffing mechanism.  Management has been refusing to bargain over any staffing, workload and scheduling issues, asserting that it is “management’s right” to staff and schedule and not hire as they see fit.  Management is also demanding to cut holidays, sick days and vacation time. 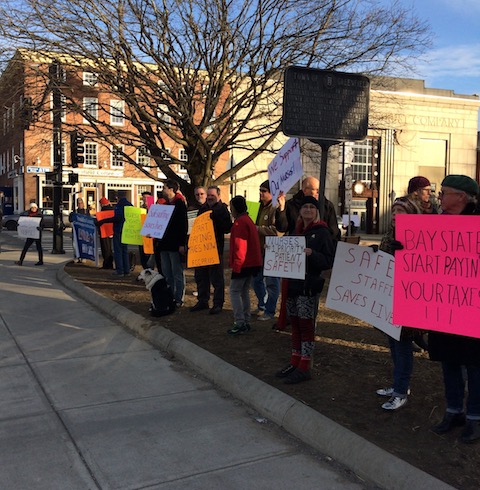 The nurses are also seeking to negotiate a decent and affordable health insurance benefit, after the hospital has eliminated two of the health insurance plans in the past year and a half.  Management has been refusing to bargain over health insurance since the outset of the negotiations.  In fact, they eliminated the second health plan on January 1 while in negotiations, and refused to discuss it, choosing instead to send notices out directly to nurses that the plan would no longer exist, and that they can choose from two substandard plans.

“The last thing nurses want to do is strike, but there comes a point when you have to make a stand, especially when the issues involved impact the very core of our mission as nurses, which is the ability to provide safe and appropriate care up to our professional standards,” said Donna Stern, co-chair of the nurses bargaining unit for the 200 nurses at BFMC. “When nurses have too many patients to care for at one time, we can’t be there for the patient when the patient needs us to be.  When nurses are forced against their will to work extra hours or entire shifts, simply because the hospital has refused to hire enough staff to cover all available shifts, nurses are exhausted and more prone to make errors in care.  Nurses also can’t tell their families when they’ll be home, or when they’ll have a day off.  Baystate management refuses to bargain over nurse workload or nurse hiring to improve the situation.”

On March 15 BFMC RNS voted, by a margin of 93%, to authorize their elected bargaining committee to call a strike if and when they see fit to do so.  To date, the parties have held more than 20 bargaining sessions, at all of which management has refused to bargain over core issues.  Management refused to even make its first complete proposal until February, which was a month after the contract’s expiration date.

The decision to issue the strike notice was made after the nurses made several fruitless attempts to present the employer with modified proposals intended to move the process forward.   For example, on May 4 the nurses presented a new set of proposals yet management would not provide any meaningful counter and continued to categorically refuse to bargain over staffing, workload and health benefits.  Management maintained this stance at sessions held on May 11 and 16.   On June 8 management promised to respond, but instead just delivered another categorical refusal.  Last night, the nurses made a final test of whether it was possible to avoid a strike by providing a revamped proposal.  Management did not respond

If the nurses strike, the strike would begin at 6 a.m. on June 26 and continue for 24 hours, with the nurses prepared to re-enter the hospital at 6 a.m. the following morning.  The MNA is open to bargaining prior to the strike date if management choses to negotiate in good faith to reach an agreement.

BFMC nurses worked shifts longer than 12 hours nearly 4,000 times in the past 12 months.

The BFMC nurses are working while exhausted, because they are so understaffed. Virtually every six week schedule has many “holes” meaning that, because management will not hire, they can’t even say who – even in theory – will work the scheduled shifts.

As a result nurses are working endless additional shifts usually without rest. In fact, 3,940 times in the past 12 months nurses had to work for longer than 12 hours because there was no one to relieve them.  The longest shift was 17.5 hours.  It is illegal in Mass. for an RN to ever work more than 16 hours – even during a state of emergency.  A May 15 letter from the MNA committee members to the hospital’s president details the abusiveness of the never ending shifts.

“We are working while exhausted…” the MNA BFMC Committee writes in the letter. “Among our most important issues in negotiations for which a long-term solution is urgently needed is understaffing that forces RNs and others to work overtime and extra shifts without rest…Because there is not enough staff, and we are forced to pick up additional shift after shift after shift and can’t go home at the end of our shifts. This is antithetical to the safe patient care studies management was (accurately) citing to us two years ago.”

BFMC nurses have been bargaining with Baystate since November 2016. The RNs have filed seven unfair labor practice charges against Baystate Franklin with the National Labor Relations Board. Bargaining is over a new contract to replace the agreement that was scheduled to expire Dec. 31, 2016. A federal mediator joined the bargaining process in February.

For more details, including the letters to the president, NLRB charges and hospital schedules, mandatory overtime reports and text messages showing a pattern of BFMC not having enough nurses for its patients, please contact David Schildmeier at 781-249-0430 or dschildmeier@mnarn.org.