Single-Payer Healthcare for California is, in Fact, Very Doable

Is Healthy California economically viable? According to research I conducted with three colleagues at the University of Massachusetts, Amherst, the answer is yes. 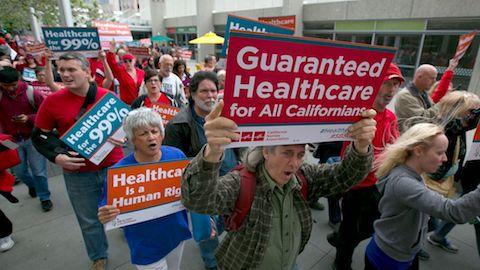 Moderators note:  On Friday California Assembly Speaker Anthony Rendon (D-Paramount) announced that the "Healthy California Act" would not be let out of committee for debate and a vote this year.

The California Senate recently voted to pass a bill that would establish a single-payer healthcare system for the entire state. The proposal, called the Healthy California Act, will now be taken up by the state Assembly.

The plan enjoys widespread support — a recent poll commissioned by the California Nurses Assn. found that 70% of all Californians are in favor of a single-payer plan — and with good reason. Under Healthy California, all residents would be entitled to decent healthcare without having to pay premiums, deductibles or copays.

But as critics of the bill have pointed out, a crucial question remains: Is Healthy California economically viable? According to research I conducted with three colleagues at the University of Massachusetts, Amherst, the answer is yes.

Enacting Healthy California would entail an overhaul of the state’s existing healthcare system, which now constitutes about 14% of California’s GDP. In particular, it would mean replacing the state’s private health insurance industry with government-managed insurance. Our study — which was also commissioned by the California Nurses Assn. — concludes not only that the proposal is financially sound, but that it will produce greater equity in the healthcare sector for families and businesses of all sizes.

California will spend about $370 billion on healthcare in 2017. Assuming the state’s existing system stayed intact, the cost of extending coverage to all California residents, including the nearly 15 million people who are currently uninsured or underinsured, would increase healthcare spending by about 10%, to roughly $400 billion.

That’s not the full story, though. Enacting a single-payer system would yield considerable savings overall by lowering administrative costs, controlling the prices of pharmaceuticals and fees for physicians and hospitals, reducing unnecessary treatments and expanding preventive care. We found that Healthy California could ultimately result in savings of about 18%, bringing healthcare spending to about $331 billion, or 8% less than the current $370 billion.

How would California cover this $331-billion bill? For the most part, much the same way it covers healthcare spending right now. Roughly 70% of the state’s current spending is paid for through public programs, including Medicare and MediCal. This funding — totaling about $225 billion — would continue, as is required by law. It would simply flow through Healthy California rather than existing programs.

The state would still need to raise about $106 billion a year to cover the cost of replacing private insurance. This could be done with two new taxes.

Second, the state could institute a sales tax increase of 2.3%. The tax would not apply to housing, utilities, food purchased for the home or a range of services, and it could be offset for low-income families with a 2% income tax credit.

Healthy California is capable of generating substantial savings for families at most income levels and businesses of most sizes. These savings are in addition to the benefits that the residents of California will gain through universal access to healthcare.

Robert Pollin is a distinguished professor of economics at the University of Massachusetts, Amherst, and a coauthor of “Economic Analysis of the Healthy California Single-Payer Health Care Proposal.”