Pope Francis’ Call for Dialogue In Venezuela Should Be Heeded, to Avoid Civil War

Venezuela does not have the religious or sectarian divisions that have fueled the civil wars, mass slaughter, and chaos of Libya, Syria, or Iraq ― all countries where the US/major media narrative about the results of successful or attempted regime change turned out to be horrifically wrong. But the political polarization in Venezuela since Chávez was elected in 1998 has been overwhelmingly along class and therefore racial lines as the two are highly correlated. 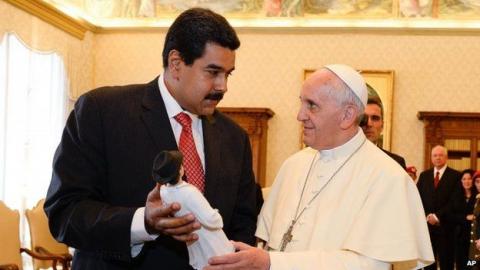 The Pope met Mr Maduro last year in the Vatican just two months after the Venezuelan leader was elected ,AP

Over the past weekend, Pope Francis called once again for dialogue in Venezuela to resolve the escalating conflict there. His plea went unnoticed in the major international media, but he is right about the urgent need for a “peaceful and democratic” solution.

In the 1980s, civil wars took hundreds of thousands of lives ― mostly civilians ― in Central America, including in Nicaragua, El Salvador, and Guatemala. This is becoming a real possibility in Venezuela if a negotiated solution is not reached.

One reason that many people do not perceive the threat of civil war is that there is a media driven narrative of the Venezuelan populace rising up against an isolated dictatorship, much like the one which was used to describe the “Arab Spring” revolts in 2011–12. With the Venezuelan economy in a severe depression, inflation at more than 500 percent, and widespread shortages of food and medicine, this narrative holds that protests will topple the government and lead to a more stable and effective administration.

This is the dominant theme in the major international media. Many of its protagonists, including the Trump administration, US Senator Marco Rubio and important opposition leaders, seek to make the economic and humanitarian situation even worse through sanctions and other tactics (including the current reported threat of more drastic sanctions) that make it more difficult for the government to borrow or obtain foreign exchange, in order to hasten the collapse of the government.

But Venezuela remains a polarized country. This can be seen in the most recent polling data. First, Maduro’s approval rating is 20.8 percent, which has been its average over the past year. This may seem low by US standards, but given the depth of the economic crisis and depression, it shows a lot of die-hard supporters. (We can also compare it to the current 7 percent approval for President Temer in Brazil, or presidents of other Latin American countries, like Mexico, who have lower approval ratings than Maduro despite growing economies.)

As others have pointed out, Maduro’s approval rating was at 21.1 percent just two months before his party got 41 percent of the vote in the last (2015) congressional election. In other words, there are a large number of people who are still skeptical of what the opposition would do, even if they think that the government is primarily responsible for an awful economic mess.

They could also be afraid. If they are associated with the government, they do not know what kind of repression they would face under an opposition government, especially one that comes to power in a coup. The Venezuelan opposition does not have a democratic and peaceful history. For example, in the 36 hours following the 2002 US-backed military coup, dozens of people were killed, and a round-up of officials of the elected government had begun. The current leadership of the opposition, although there are many divisions, has been pretty silent about opposition violence during the current protests in Venezuelan cities, including many killings.

The same polling also shows that 55 percent of the people approve of Hugo Chávez. The public is divided on the protests, with a majority in favor by a margin of 51.3 percent to 44.2 percent. (All polling numbers here are from Datanalisis, which is the most-cited polling firm in the international media, and cannot be accused of a progovernment bias.)

In addition to the polarization of the population, there are institutional and structural reasons to worry about civil war. There is a military of more than 100,000, and progovernment militias that the government claims to be in the hundreds of thousands. Many more Venezuelans have firearms.

Venezuela does not have the religious or sectarian divisions that have fueled the civil wars, mass slaughter, and chaos of Libya, Syria, or Iraq ― all countries where the US/major media narrative about the results of successful or attempted regime change turned out to be horrifically wrong. But the political polarization in Venezuela since Chávez was elected in 1998 has been overwhelmingly along class and therefore racial lines (the two are highly correlated, as in most of Latin America).

This is obvious to anyone who has ever witnessed opposition and progovernment demonstrations there over the years. Although the street demonstrations today have a broader middle class base than those of 2014 ― unlike then, many middle class people today are really hurting ― they have generally not been joined by poorer Venezuelans. At a large opposition mobilization in May, sociologist David Smilde noted "how different the people selling water, beer and snow cones looked from those attending the demonstration in terms of dress and skin color.”

The lynching in May of 21-year-old Orlando Figuera, an Afro-Venezuelan man, who was stabbed and burned to death by a mob of opposition protesters, was an ugly reminder of these racial and class divisions and a warning of what civil war could look like.

Negotiations would have to address the deterioration of the rule of law over the past few years. This would include such issues as the democratically elected National Assembly regaining its full constitutional powers; the release of jailed opposition leaders; the use of civilian and not military courts for trials of protesters; and elections, including the overdue regional elections and the constitutionally mandated presidential elections next year.

But there would also have to be constitutional guarantees for whoever loses future elections that they will not be victims of persecution in which all branches of government, including the judiciary, are controlled by one side and stacked against them. Without such credible guarantees, it may be difficult to avoid escalating civil conflict.

Like most wars, civil wars have to be prevented ― once they get started, they can be very difficult to end. Colombia’s civil war lasted more than half a century, and the government is still struggling to end the remaining violence after its historic peace agreement was signed last year.

Pope Francis is credited with playing an important role in the 2014 negotiations for the Obama administration’s opening to Cuba. Hopefully he can also contribute to a negotiated solution in Venezuela.