Sidelining Science Since Day One

This administration and its allies in Congress are undermining science-based policies, violating the principles of scientific integrity, showing contempt for the role of science in general, and seeking to dismantle the very processes by which science informs public policy. 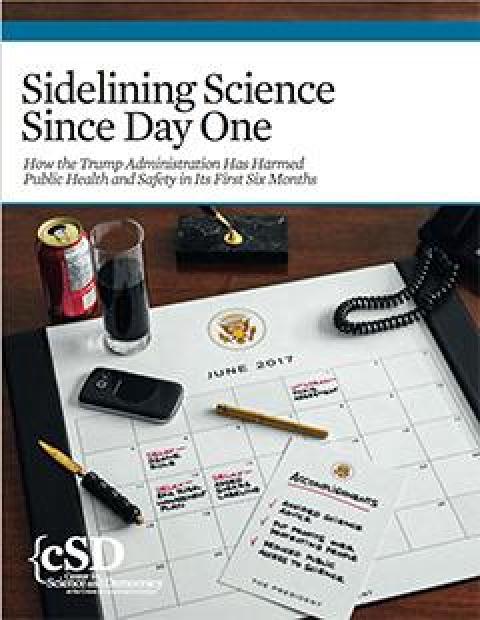 [moderator: the full report (as a pdf) can be found here.]

The Trump administration is waging a war on science and on science input in the policymaking process, endangering the nation’s health, economy, environment, and leadership in the world. This administration and its allies in Congress are undermining science-based policies, violating the principles of scientific integrity, showing contempt for the role of science in general, and seeking to dismantle the very processes by which science informs public policy.  The attacks will severely worsen the nation’s health and safety, with the greatest impact on the nation’s most vulnerable populations. A clear pattern has emerged over the first six months of the Trump presidency: multiple actions by his administration are eroding the ability of science, facts, and evidence to inform policy decisions, leaving us more vulnerable to threats to public health and the environment. The Trump administration is attempting to delegitimize science, it is giving industries more ability to influence how and what science is used in policymaking, and it is creating a hostile environment for federal agency scientists who serve the public.

This is a new era in which political interference in science is more likely and more frequent and will present serious risks to the health and safety of the American people. The science community and the general public have responded vigorously: standing up for science, calling out “alternative facts,” articulating the importance of science-based policymaking, and marching in the streets. Sustained engagement will be necessary to prevent the most significant damage.

The Union of Concerned Scientists (UCS) has long advocated for strong principles of scientific integrity in the federal government to ensure that science can serve society fully. Scientific integrity includes not only the ability of scientists to perform and communicate their work freely but also the ability of policymakers and the public to access unvarnished scientific information and utilize it to advance the public interest. It is a process by which independent science fully and transparently informs policy decisions, free from inappropriate political, ideological, financial, or other undue influence.

Political interference in science is not new. All modern presidents have politicized science to some extent. Past administrations and their allies have falsified, fabricated, or suppressed evidence, selectively and deceptively edited documents, exaggerated uncertainty, tampered with scientific procedures, allowed conflicts of interest to interfere with decision-making, let political considerations drive science advisory board appointments, targeted essential data collection initiatives for elimination, and intimidated, censored, and coerced scientists. Under the Trump administration, these threats to the federal scientific enterprise have escalated markedly.

Political Interference in Science Under the Trump Administration

In a few short months, the Trump administration has undermined the process by which science informs the policymaking process. The administration has shown a blatant disregard for scientific facts and evidence, appointing officials with a track record of misrepresenting scientific information, overruling the recommendations of scientists on exposure to toxic pesticides, removing scientific information from agency websites, and dismissing independent science advisors. Aided and abetted by Congress, the administration has delayed or eviscerated science-based rules that safeguard the American people, from protecting workers from toxic work environments to helping communities prepare for the impacts of climate change. Moreover, President Trump and his administration have created a hostile environment for federal government scientists, making it more difficult for these individuals to meet their job duties and responsibilities and engendering fear about discussing their work.

Emerging patterns reveal tactics to diminish the crucial role of science in our democracy. These actions seem to align with a broader administration strategy to achieve, as White House chief strategist Steve Bannon put it, the “deconstruction of the administrative state.” Yet the national and global challenges we face require the development of scientific knowledge and its application to public safeguards and  policy solutions.

• Appointing conflicted individuals to scientific leadership positions. President Trump has appointed to the highest positions in government individuals with little science background and with strong ties to the industries they are charged with regulating.

The challenges we face require the development of scientific knowledge and its application to public safeguards.

The administration has delayed or eviscerated science-based rules that protect the American people.

• Undermining protections from hazards at work and home. The Trump administration has delayed many science-based rules intended to keep communities safe from dangerous chemical spills and to safeguard workers from harmful toxins, with little to support halts except for letters and petitions from companies or industry trade associations.

• Reducing public access to data. The Trump administration has reduced public access to scientific data and information. The administration also has stopped collecting certain data for programs that benefit disadvantaged groups. And it has withdrawn requests to industry to supply data that would help inform public health and environmental protections.

• Restricting communication of scientists. The Trump administration is making it more difficult for government scientists to speak publicly about their work, as well as about misconduct within an agency

• It has restricted communication with Congress, placed vague gag orders on agency staff, and failed to affirm the ability of scientists to share their expertise publicly.

• Creating a hostile environment for scientific staff. Evidence is growing that a culture of fear is increasing at government agencies, undermining scientific research and communication. Scientists are speaking to the media anonymously out of fear of retaliation; some are afraid to utter the words “climate change.”

On April 22nd, the March for Science attracted over a million people worldwide to gather and call for evidence-based policy decisions. Roughly 100,000 scientists and science supporters protested in Washington, D.C. 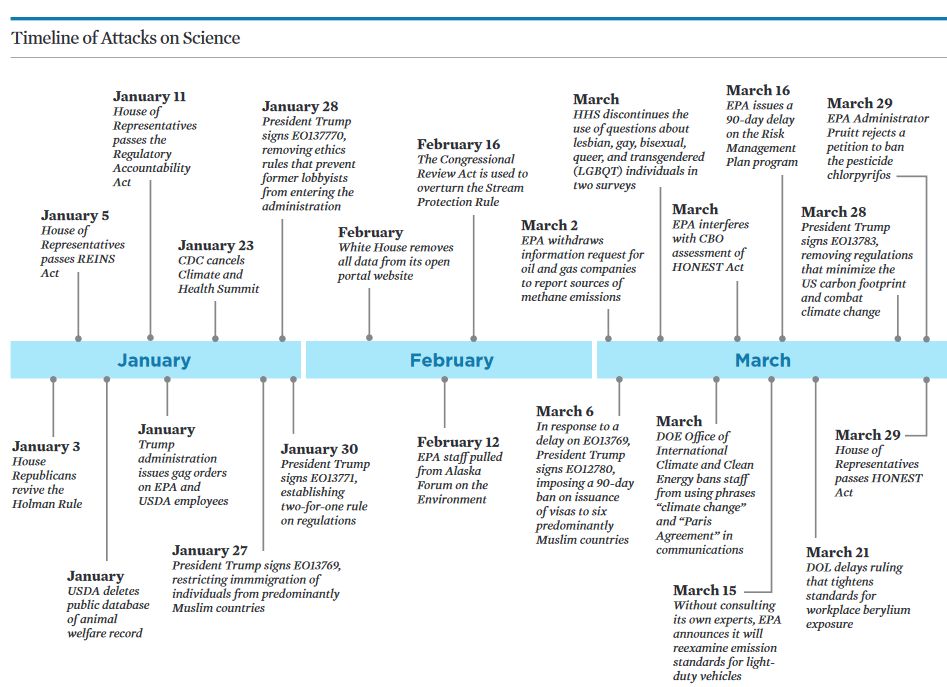 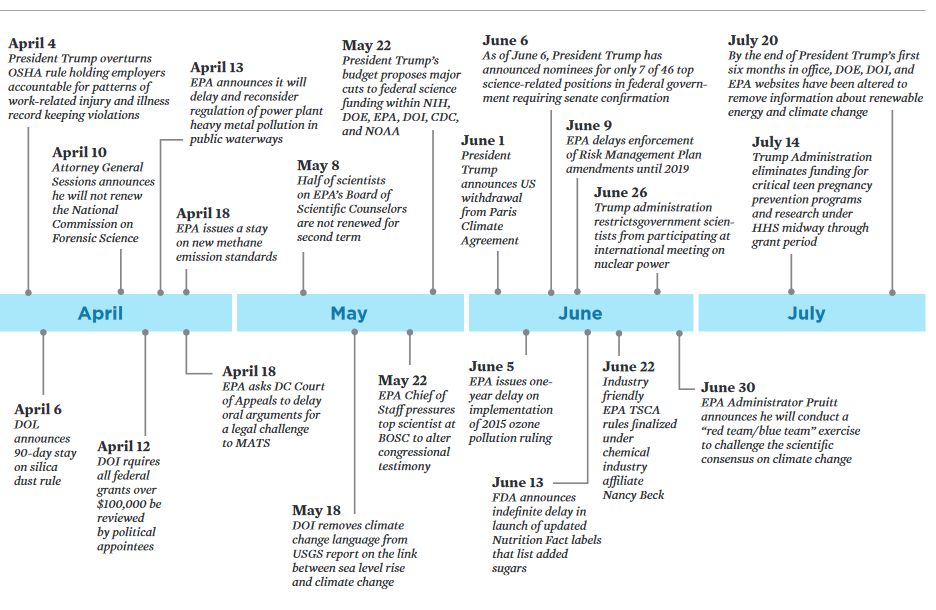 Science Will Not Stand Down

As global challenges become ever more complex, the science the nation relies on is more important than ever. In the coming decades, the United States will face some of the most difficult challenges in its history, including climate change, antibiotic resistance, and threats to our national security.

Science and technology are instrumental to meeting these challenges. The public deserves independent, impartial scientific information, even—or perhaps especially—when that information indicates the need for politically unpopular or inconvenient action.

• Scientists and science supporters should scrutinize administration and congressional actions and sound the alarm when science is misused. They can also play a unique role in articulating to others the importance of science in our daily lives. Communicating the importance of science and science-based policies to the public and decisionmakers is crucial to fighting attacks on science in this highly charged political environment.

• Congress should use its oversight authorities to investigate and hold accountable the administration for actions that threaten scientific integrity and science-based policies, and it should act to protect whistleblowers. With the growing trend of abuses against science in the Trump administration, Congress must exercise its full authority as a check against the executive branch. Also, Congress should pass legislation to better protect federal scientists and the integrity of science in our federal agencies.

• Journalists must continue to hold administration officials and members of Congress accountable for their words and actions and investigate cases of suppressing, misrepresenting, manipulating, or otherwise politicizing science, along with related allegations of wrongdoing in our federal government. The media should seek out scientists as sources when possible and call out agencies that place unnecessary barriers on communications between journalists and government scientists.

The Union of Concerned Scientists puts rigorous, independent science to work to solve our planet’s most pressing problems. Joining with citizens across the country, we combine technical analysis and effective advocacy to create innovative, practical solutions for a healthy, safe, and sustainable future.