books How Times have Changed: Sex, Drugs and Bowling

From outlawing bowling in colonial America to regulating violent video games and synthetic drugs today, Mark Stein’s Vice Capades examines the nation’s relationship with the actions, attitudes, and antics that have defined morality. This humorous and quirky history reveals that our views of vice are formed less by morals than by power. 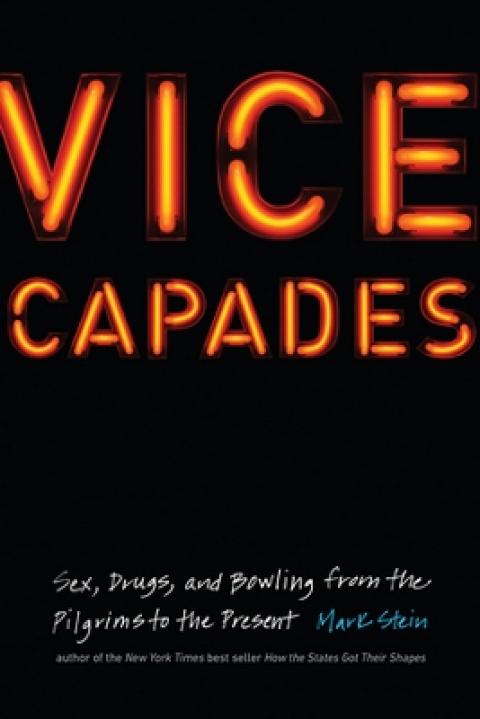 ., University of Nebraska Press
Vice Capades: Sex, Drugs, and Bowling from the Pilgrims to the Present
By Mark Stein
University of Nebraska Press, 304 pages
Hardcover:  $29.95
July 1, 2017
ISBN: 978-1-61234-894-0
Among the less dismal items to appear in my news feed in recent days have been a couple of articles from the International Business Times -- distinguished, in each case, by a combination of words I’d not seen in a headline before. In one, it was “sex robots,” in the other, “snortable chocolate.” After months of “fake news” and “presidential tweets,” a departure from the norm is welcome.

O brave new world, that has such commodities in it! Amazon confirms that snortable chocolate, also called “raw cacao snuff,” is available for purchase. The sex robots are not, as yet, though you can preorder Robot Sex: Social and Ethical Implications, edited by John Danaher and Neil McArthur, due from MIT Pressin October. It is a matter of time until the robots themselves are listed, presumably under “appliances.”

Neither product turns up in Mark Stein’s Vice Capades: Sex, Drugs and Bowling From the Pilgrims to the Present (University of Nebraska Press). But they seem to fall into place, readily enough, among the suspect pleasures it catalogs.

A partial list would include alcohol, tobacco, cocaine, dancing, theater going, boxing, games of chance and the use of foul or blasphemous language. Also fornication, of course, whether actual or pornographically vicarious. (Sex robots blur that last distinction, while snortable chocolate, a stimulant, falls somewhere between snuff and the illegal sort of nose candy.)

So what do all these indulgences share? I’ve gone back through Vice Capades in search of the author’s explanation -- to no avail. It is a loose, rowdy sort of book -- packed with historical anecdotes but scholarly in neither intention or method. Stein is a screenwriter and playwright, and one of his earlier books was the basis for American Panic: A History of What Scares Us and Why, a series on the History Channel.

Vice Capades reads like a staging area for another such program, which may explain why he can afford to leave the central term, “vice,” undefined except through a nod to Supreme Court Justice Potter Stewart’s memorable formulation about obscenity: “I know it when I see it.”

The audience is likely to concur -- which sets things up nicely for the ensuing ramble through history. For the problem, of course, that vice is not solely in the eye of the beholder. The vice of one century, such as bowling or playing cards, can become the wholesome family recreation of another. There is something amusing, but also intriguing, about seeing examples from history of people working themselves up into a righteous frenzy of alarm and condemnation about, say, juggling, which was illegal in some of the early American colonies.

Something really counts as a vice, then, when it is denounced and (to the degree possible) prevented by people in a position to make their judgments stick. That power waxes and wanes over time as different groups make claims to hold authority. When they do, both the vices causing concern and the rationales for proscribing them can change sharply. In 17th-century Boston, juggling looked to clergy like the slippery slope to witchcraft, while Eisenhower-era psychiatrists were convinced that violent comic books would spawn a generation of homicidal maniacs. For all the difference between theological and medical vocabularies, a certain shared urge to secure and strengthen public order is obvious.

Stein’s examples and narratives are a good deal more interesting than his analysis. Protectors of the status quo who feel confident in their cause tend to reveal their own self-interest in blatant ways. Consider the remarks of a temperance crusader from 1917:

“Saloon keepers are frequently the most effective leaders of the new industrial immigrants. There is hardly a drinking place in a large foreign colony which does not have its political club. The brewers do everything possible to create a feeling of antagonism among the units of the new immigration against the ‘Puritanism’ of the AngloSaxons.”

Concern with the newcomers’ sobriety, however heartfelt, is pretty clearly mixed up with anxiety over the neighborhood bar as a political hub. And in the case of a few vices, the panic they generated in previous generations is almost unbelievable now. Old warnings about the violent behavior of marijuana addicts are difficult to credit by anyone who has seen a stoner attempt to locate a TV remote control.

Vices tend to be redefined, Stein suggests -- destigmatized, even if not fully legalized -- when the economic profits they generate outstrip their social costs (real or imagined) or the expense of enforcing their prohibition.

However widely that claim can be generalized, it puts the news I mentioned earlier into a certain perspective. Snortable chocolate is new and unregulated -- a “suspect product [with] no clear health value,” in the words of Senator Chuck Schumer. “I can't think of a single parent who thinks it is a good idea for their children to be snorting over-the-counter stimulants up their noses.” Its status as a potential vice is clear.

And likewise with the sex robot, that other affront to lingering Puritan sensibilities. The International Business Times reporter lists any number of worrisome potential side effects of a technology that “it's likely … [will] become more widespread,” such as “greatly reinforc[ing] a pornographic and objectified vision of women” and “potentially decreas[ing] people's understanding of consent, as there is no need to ask for the robots permission to engage in a sexual act.”

Mark Stein is an author, screenwriter, and playwright. He has published several books, including How the States Got Their Shapes, a New York Times best seller and the basis for the eponymous History Channel series, and American Panic: A History of Who Scares Us and Why.
[Reviewer Scott McLemee is the Intellectual Affairs columnist for Inside Higher Ed. In 2005, he helped start the online news journal Inside Higher Ed, where he serves as Essayist at Large, writing a weekly column called Intellectual Affairs. His reviews, essays, and interviews have appeared in The New York Times, The Washington Post, The Boston Globe, The Nation, Newsday, Bookforum, The Common Review, and numerous other publications.]