The Texas Senate has passed legislation that would end the state's practice of collecting membership dues for certain public employees who are members of labor unions and associations. 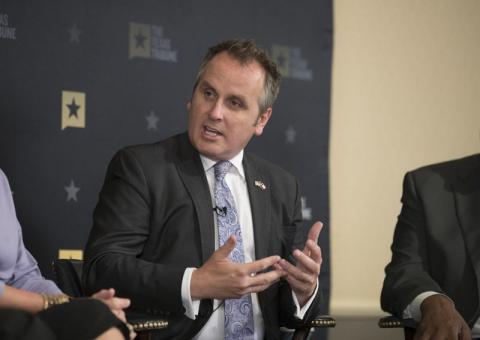 State Sen. Bryan Hughes, R-Mineola, gives his views on mandatory pre-kindergarden education while wrapping up a Texas Tribune event at the Austin Club May 25, 2017.,Bob Daemmrich
The Texas Senate late Tuesday night gave initial approval to legislation that would end the state's practice of collecting membership dues for certain public employees who are members of labor unions and associations.
The 19-12 vote on Senate Bill 7 by state Sen. Bryan Hughes, R-Mineola, followed a couple of hours of debate on the Senate floor and a four-hour committee hearing Sunday, where testimony mainly came from those opposed to the bill.
State Sen. Robert Nichols, R-Jacksonville, broke with his party — and from his stance on an identical bill the upper chamber approved along party lines during the regular legislative session in March — and voted against the measure Tuesday night.
“The point of this bill is that the government should not be involved in this process," Hughes said as he laid out SB 7 on the floor, adding that more than 1 million public employees would be affected at the state, county and local levels if the bill passed.
SB 7 would prohibit certain public employees, such as teachers and corrections officers, from using payroll deductions to pay their union or association dues. It would exempt police officers, firefighters, emergency first responders and charitable organizations — a carve-out that's drawn pushback not only from teacher associations but from law enforcement groups that benefit from the exemption. They say the measure is discriminatory and would make it tougher on employees who work long hours to funnel dues to the organizations affected by the legislation.
"This ground has already been plowed," Hughes said, adding that law enforcement groups often receive different death and retirement benefits than teachers and corrections officers. "For decades now, we've treated first responders differently. I don't think there's anything new with that."
Several Senate Democrats questioned Hughes, but the testiest exchange occurred when state Sen. Royce West, D-Dallas, suggested the measure could be subject to a court challenge on the basis of discrimination if it passed the Legislature.
“Aren’t teachers just as special as police officers or firefighters?” West asked Hughes. “You’re frankly treating two different groups differently — you’re basically being unfair. Would you not agree with me that this bill would be subject to a constitutional challenge based on discrimination?”
Hughes' explanation differed from state Sen. Joan Huffman's. The Houston Republican authored the same bill during the regular session, and said she had exempted first responders from the legislation because they served communities with "great honor and distinction."
When asked about the need for the bill, Hughes referenced the 2016 Republican primary ballot, where around 83 percent of primary voters backed a referendum to prevent the state from collecting dues for public employees. During the floor debate Tuesday night though, Democrats argued the language on the ballot was misleading and inaccurate.
Some lawmakers have mentioned amending the bill to either broaden the exemption to other employees — such as teachers and corrections officers — or nix the carve-out altogether.
But Hughes said Tuesday he "made it clear" he wouldn't back the measure if the legislation applied to law enforcement and first responders, adding that Gov. Greg Abbott told him he'd veto SB 7 if it landed on his desk without the exemption.
Texas is one of 28 "right-to-work" states in the nation, which means employees aren't required to pay dues or join unions — and those who do join unions and associations must opt in to have membership dues automatically deducted from their paychecks.
Senators still need to give the bill final approval before it can head to the House, where it would join its identical counterpart, House Bill 156 by state Rep. Jason Isaac, R-Dripping Springs. (Update July 26: Senators gave the bill final approval, sending it to the House.)
Read related Tribune coverage:
The Texas Senate tentatively approved a measure that would end the state’s practice of collecting public employee membership dues for certain labor unions and other associations through payroll organizations. [Go to story]
SUPPORT OUR NONPROFIT NEWSROOM. DONATE NOW.
Subscribe to Portside