Transgender Liberation Won't Be Found in the Military

Contrary to the rhetoric dominating the news cycle right now, trans liberation doesn't look like gender non-conforming bodies in military uniforms killing civilians overseas. It doesn't include rallying for entrenchment into the military-industrial complex that furthers the imperialist aims of the United States, or assimilating in hopes that a country that has never cared for trans lives will begin to. 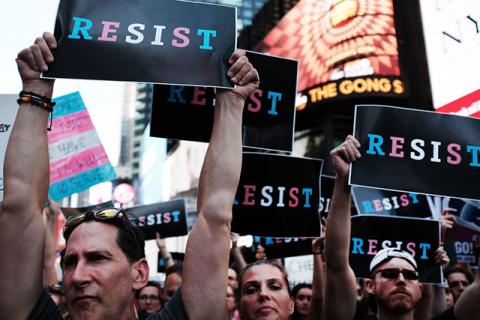 Dozens of protesters gather in Times Square near a military recruitment center to show their anger at President Trump's decision to reinstate a ban on transgender individuals from serving in the military on July 26, 2017, in New York City. , Spencer Platt/Getty Images

On the morning of July 26, 2017, President Trump sent out a series of tweets regarding the military service of trans soldiers. He announced that the "tremendous medical costs," apparently associated with transitioning, were cause for a reinstatement of the ban that had been lifted in 2016. Since then, there has been an outpouring of rage and frustration over this change in the direction that the Pentagon's gender-based policies have taken. However, amongst the calls of support for trans military personnel and the citations of how annual medical costs for active-duty trans service members are far lower than annual military spending on Viagra, important, nuanced critiques are being drowned out.

Contrary to the rhetoric dominating the news cycle right now, trans liberation doesn't look like gender non-conforming bodies in military uniforms killing civilians overseas. It doesn't include rallying for entrenchment into the military-industrial complex that furthers the imperialist aims of the United States, or assimilating in hopes that a country that has never cared for trans lives will begin to.

The move to include transgender individuals in the armed forces by the Department of Defense in 2016 was not a sign that the US is leaving preconceived notions about the gender binary behind and embracing a fuller spectrum of identities. Rather, it was an example of shameless neoliberalization of LGBT+ issues and flagrant homonationalism. With that in mind, it is clear that this reversal isn't a step forward or backward in terms of protecting and validating trans individuals. Government decisions on this topic mainly reflect whether the state sees trans folks as instrumental to the project of hegemony or as an affront to "American values."

Military inclusion is far from being the most pressing and important battle being fought by activists domestically. The advocacy and interest in this didn't come from protests and passionate pleas -- those were reserved for more pressing issues, like mass incarceration and lack of health care services. Still, before Trump's reversal, military inclusion had been propped up as a sign of tangible change to come, instead of as a pseudo-progressive action that ignores the actual issues at hand that are plaguing the trans community. The recruitment of trans military personnel had little solvency for the larger and more deadly threats facing transgender citizens.

From an international perspective, hyper-nationalistic calls for reversing Trump's statement on trans military service encourage the destruction of solidarity with other marginalized people across the globe. Historically, one of the most important features of the queer liberation movement has been its united front with victims of US military intervention.

There are clear and defined overlaps between sexual liberation and the dismantling of the economic power structure and white supremacist social hierarchy that reinforce these systemic inequalities. To strive for true transgender liberation means to stand in solidarity with trans people across the globe, not just within the confines of the West. This includes opposing the jingoistic entities that perpetuate the imperialist policies of the state. Simply including marginalized people into this governmental body that has victimized queer people of color across the globe isn't enlightened -- it's just a new way to indoctrinate. Response to this news out of the White House shouldn't include whitewashing the military by portraying it primarily as a battleground for equality. There should be a focus on deflating the bloated budget to invest in health care, continuing the struggle against ICE and re-contextualizing trans justice as a global fight.

If the aim is to truly help the transgender community instead of building up false narratives of progress, there need to be concentrated efforts to solve the true crises at the heart of this disenfranchisement. As cited by the National Coalition of Anti-Violence Program, close to 90 percent of LGBTQ murders in 2013 were people of color, 72 percent of those being transgender women. Violence manifests as housing discrimination, the wage gap and police violence, to give an extensively abridged list of examples, and puts these women -- especially those who are Black or Latinx -- at elevated risks of being victimized. None of this can be solved by putting more military uniforms on trans folks brutalized by a white supremacist, imperialist state.

As military personnel begin to respond with opposition to Trump's announcement, it is crucial to keep in mind that this doesn't mean that the armed forces are enlightened saviors or the lesser of two evils in our current political moment. Generals and other high ranking officials in the Pentagon aren't interested in justice or the livelihoods of trans Americans, they are first and foremost invested in the war machine and creating a neoliberal military that can absorb marginalized communities to use for fodder in the state's imperial ambitions.

Freedom won't be found by piloting drones killing children in Yemen or upholding a nation built and sustained on blood. We don't need more trans bodies to act as bullet shields in lands we have no business occupying; we need better wages, access to health care and an end to prisons. To prioritize military service above those is to betray trans liberation.

Syd Roberts is a queer, nonbinary labor rights activist in North Carolina and a junior at Duke University. They are a Marxist and a prison abolitionist with interests in postcolonial theory, digital humanities and anti-capitalist imaginaries. Follow them on Twitter and Tumblr: @hegelsbagels, Foucault's Ghost.

Support Truthout with a tax-deductible donation