The creator of Insecure, Issa Rae, talks about blackness as season two begins. 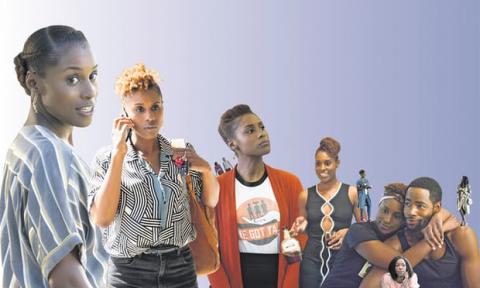 “I don’t want the stench of the current administration on this show,” says Issa Rae. “I don’t want people to look back and be like: ‘Oh, this was a Trump show.’ I want them to look back and say Insecure was an Obama show. Because it is: Obama enabled this show.” The sharp, pithy, Los Angeles-set comedy, dubbed by US fashion and beauty site the Cut as “the black, millennial Sex and The City”, which Rae co-created, writes and stars in, first aired on HBO last autumn, exactly a month before the US election. “Culturally, Obama made blackness so present, and so appreciated; people felt seen and heard; it influenced the arts, and it absolutely influenced how I see blackness, how I appreciate it,” says the 32-year-old Rae. “When a black president is a norm, it enables us to be, too.”

Being a norm is a matter of some import to the actor and writer, who – in spite of her personal allegiances – had no desire to make an overtly political show. She never wanted Insecure to be, as she says with a generous eye-roll, a story about “the struggle” or “the dramatic burdens of being black”. At the heart of the series is the relationship between her on-screen iteration – also named Issa, who works for an educational nonprofit called We Got Y’all and raps soliloquies to herself in the mirror – and her best friend Molly (Yvonne Orji), a high-flying corporate lawyer. Together, they navigate the professional and personal challenges of late-20s urban life.

“I just wanted to see my friends and I reflected on television, in the same way that white people are allowed, and which nobody questions,” continues Rae. “Nobody watches Divorce [a HBO stablemate, starring Sarah Jessica Parker] and asks: ‘What is the political element, what is the racial element driving this?’”

But – so rare is it to see what its creator describes as “a show about regular black people being basic” in contemporary entertainment – Insecure has nonetheless been hailed as revolutionary. It wasn’t always so. Growing up, Rae was an avid fan of the predominantly black US sitcoms Moesha, Girlfriends and A Different World. “Then they disappeared,” she says of the film and television landscape. “Somewhere along the way, being white became seen as ‘relatable’, and you started to see people of colour only reflected as stereotypes or specific archetypes. So much of the media now presents blackness as being cool, or able to dance, or fierce and flawless, or just out of control; I’m not any of those things.”

It is a hot and swampy summer afternoon in Manhattan, and Rae is in town doing the requisite rounds of late-night talkshow appearances ahead of Insecure’s season two premiere. On arrival, she seems a little lethargic – entirely understandable, given her promotional schedule. But once seated in a buzzy restaurant, specifically chosen because it’s the sort of spot that the on-screen Issa and her girlfriends would patronise, Rae immediately perks up, emanating charismatic good humour.

Born in an affluent suburb of Los Angeles, Rae – real name Jo-Issa Rae Diop – is the third of five children, her father a Senegalese doctor, her mother a teacher from Louisiana. The rapid rise in gang violence in the city prompted Rae’s parents to move the family to Senegal’s capital, Dakar, when Rae was five years old. Her father tried to open a hospital there but things didn’t work out and, three years later, they came back to the US, but to Potomac, Maryland, on the east coast, where Rae attended a predominantly white private school. When the family moved once again, this time back to LA, Rae entered a largely black and Latino school. “Everybody thought I was lame and hated me,” she says, matter-of-factly. “It was a huge culture shock.”

Part of the on-screen Issa’s insecurity – of feeling “not black enough for black people and not white enough for white people” – is, Rae says, “something that I have been called out for by kids in my life. I’ve experienced a real sense of feeling out of place.” But with admirable chutzpah, she found a creative solution: “I wrote a play and cast all of my bullies, and they loved it. They thought I was cool after that.” She pauses, and gives a wry smile. “Well, cool is a strong word. But I wasn’t on their shit-list any more.”

While studying at Stanford University, Rae began to notice that many of the television shows she loved, including Curb Your Enthusiasm and Seinfeld, were all-white comedies. “Of course, sense of humour is relative, is subjective, but there is an assumption that black people won’t find certain things about white comedies funny,” she says. “I got really frustrated and just wanted to start making my own stories.” She conceived and directed Dorm Diaries, a mock reality show with an all-black cast, in the style of MTV’s The Real World. When she posted it to Facebook, it quickly circulated, and Rae realised that she had a talent for portraying everyday black life; she has called it “my epiphany moment”. A few years later, she created what would be her breakthrough web series and the forerunner to Insecure, The Misadventures of Awkward Black Girl.

A web show is one thing, of course, a mainstream television show on a high-profile cable network quite another. I ask her about the sociologist and civil rights activist WEB Dubois’s concept of “double consciousness”, which she has referenced in the past, defined as the “psychological challenge of always looking at one’s self through the eyes of a white society”. Does she feel that even more sharply now than before?

“Absolutely. I didn’t create this show for white people, I didn’t create it for men; I created it, really, for my friends and family, and for their specific sense of humour,” she nods. “But now that we know we have an audience – including HBO executives – the double consciousness comes into play, because you’re always wondering: ‘How do they see what I am writing?’ Are they laughing at this specific joke for this particular reason? “When season one aired, I had Asian women coming up to me on the street, saying: ‘Oh my gosh, this reminds me of me and my best friend,’” she recalls. “And that’s wonderful – that’s what you want for a show – but you are always wondering: ‘What elements do they relate to the most?’”

I suggest that in future she stops fans and asks for further, more detailed feedback. She throws her head back and laughs. “Yes. ‘Excuse me, but why do you like the show? Tell me right now, please.’”

While Insecure may be only inadvertently political, this second season is noticeably more charged with social commentary, and examples of everyday discrimination. Through Molly, the show explores the gender pay gap, with an added issue to unpick: is she being paid less because of her gender, or her ethnicity, or both? “These are questions that we constantly have to ask ourselves, as minorities, or double minorities, or triple minorities,” nods Rae. “In terms of the intersectionality of it all, you are constantly asking yourself: ‘Which part of me is being discriminated against? Which part of me is being targeted? If not all parts of me.’”

The often-dispiriting experience of modern dating features prominently, too. At the start of this series, Issa has recently broken up from her long-term boyfriend, Lawrence (Jay Ellis), and thrown herself into the choppy waters of Tinder, Bumble and Hinge. Dating in today’s digitally enabled world is rough enough but there is, Rae believes, an added dimension for her characters. “Black women are at the bottom of the desire chain, of the dating totem pole; we’re not the trophies,” she says.

“In rap culture, especially, there’s always an idea that once you achieve an amount of success, your trophy is the white girl on your arm.” However, she asserts, that’s not limited to hip-hop. “It’s not scientifically proven, but there’s evidence, in dating apps for example, that we’re the last to be chosen, the least desirable.” The theory is also explored in Aziz Ansari’s Netflix show Master of None, which includes a scene in which one of his dates, a black woman, tells him: “Compared to my white friends, I get way less activity [on app dating sites]. I also find that I rarely match with guys outside of my race.”

Lawrence, meanwhile, is also experiencing discrimination, albeit in a different form. In one scene – spoiler alert! – he is picked up by two non-black girls at a grocery store, who lure him to their apartment, where they proceed to seduce him. Their fetishisation of his blackness has echoes of Get Out, Jordan Peele’s racism-thriller which triumphed at the box office earlier this year.

There is a show-within-the-show too, an antebellum-era television drama that several of Insecure’s characters are glued to. “Last year, our show-within-a-show was Conjugal Visits, which was a comment on the trash TV that consumes us all. Setting it in a prison – a system which, in this country, incarcerates mainly black and Latino people – and making that entertainment, was definitely meta-commentary,” nods Rae.

This season’s skewering of popular culture is no less pointed. “There’s [been] such an obsession with depicting slavery that the last few years, I have been kind of slaved-out,” she sighs. “So we thought it would be funny to have the characters obsessed with this new slave interracial drama.” A guest-starring role for Sterling K Brown, who won an Emmy for his portrayal of prosecutor Christopher Darden in The People Vs OJ Simpson, ups that meta ante even further, but Rae is quick to assure me that this wasn’t a casting that she chased down. “No! We actually have an anti-celebrity policy on the show,” she insists. “We were doing something together for the Independent Spirit awards, and he was, like: ‘I love your show, if you ever want to cast me …” The musician Syd, another self-proclaimed fan of the show, also makes a brief cameo.

Although Rae resists comparisons between Insecure and Girls – and of herself to its creator Lena Dunham: “I get the inclination to compare us because we’re both young women, but the stories we’re telling couldn’t be more different,” she says – the two share a deliciously frank depiction of female sexuality. Broken Pussy, one of Issa’s raps, became something of a refrain in season one, after she speculates that Molly’s run of bad luck with men might be the result of a defective filtering system.

“My friend and I have a thing where we talk in, um, pussy sounds,” Rae laughs. “I think that most women know whether they want to sleep with a guy or not within the first five minutes of meeting him, and so we speak in Marge Simpson voices about whether or not a guy could get it.” She demonstrates. “If it’s a yes, we’ll say: ‘My pussy was like: [Perky, eager voice] ‘Mm-hm, girl.’ Or, ‘My pussy was like, [Low, negative tones]: ‘Mm-mm’. So, the conversation about Molly feeling like she wasn’t attracting the right type of guys was me suggesting her pussy might actually be broken.”

What did her mother make of this particular piece of dialogue? “She only saw it at the screening!” Rae laughs. “She pulled me aside afterwards and was, like: ‘That mouth, we’re going to wash it out … but, good job.’”