Kareem Abdul-Jabbar: Don’t Tell Colin Kaepernick to "Stick to Sports"; ‘Where Is the Support from the White Players?’

The NBA legend, who once faced withering criticism after he converted to Islam and changed his name, argues that NFL players need to step up in solidarity and defend an outspoken black quarterback fighting for social justice and a job. 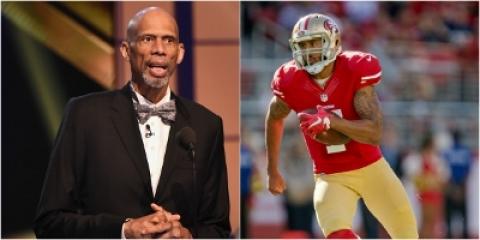 Kareem Abdul-Jabbar (left), Colin Kaepernick (right), TotalProSports.com
The swirling turmoil around whether or not NFL teams are reluctant to sign Colin Kaepernick because of his outspoken politics reminds me of a restaurant near my home called The Quiet Woman, which features a headless woman. The name, common among English pubs, honors a 15th-century literary character who had her head cut off because of her religious beliefs. This preference, mostly in the NFL, for “headless” athletes who remain quiet about politics during one of the most tumultuous times in American history is a throwback to an era when athletes were expected to "shut up and stick to sports."
Those days should be gone. This '50s-style, Father Knows Best paternalism does a disservice to players by hindering their First Amendment rights to join political discourse, but it also does a disservice to America by preventing the public from hearing all sides of political and social issues.
Some think that Colin is being punished by the NFL for taking a knee during the national anthem, or for sporting a magnificently defiant Afro, or for his recent trip to Ghana to find his "personal independence" by finding out where his ancestors came from, or for his Fourth of July tweet: “How can we truly celebrate independence on a day that intentionally robbed our ancestors of theirs?”
Rep. Cedric Richmond from Louisiana, who is also chair of the Congressional Black Caucus, argues that Colin’s treatment is unfair: “[T]he fact that he spoke up means he’s a great person and he spoke his conscience. I don’t think we should penalize people in this country for doing that.”
As I look around the NFL at backup quarterbacks, it seems that his talent is superior to a lot of people who are on teams already. And nothing in his words or actions is groundbreaking, nothing that activist athletes haven’t said before. Yet the backlash against him seems more intense than with other outspoken athletes, like Serena Williams and LeBron James. 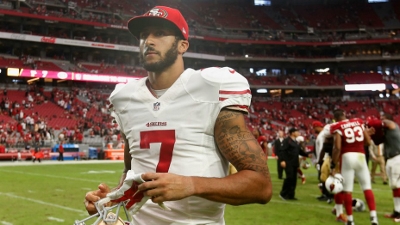 Colin Kaepernick
Christian Petersen/Getty Images // Hollywood Reporter
Taking a political stance can be career suicide for some athletes. Millions of dollars and their entire future can be squandered by pointing out that there is institutional racism in America, a fact already supported by “endless studies,” according to U.S. News & World Report. Athletes like Colin think it’s worth the personal sacrifice because, to them, it’s less about disrespecting America than about publicizing information that many white Americans deny. A 2016 Pew Research Center poll showed that 88  percent of blacks felt the country needed to make changes to achieve racial equality, with 43 percent skeptical that these changes will ever occur. But only 53  percent of whites agreed about the need for more changes, with only 11 percent skeptical that we’ll achieve equality. Ironically, it’s athletes like Colin who represent the unskeptical percentage — those still filled with hope, because they believe that by pointing out social injustice, we might actually eliminate it. Otherwise, they would just take the money and run, with the mantra “At least I got mine.”
According to some experts, Colin’s career struggles this year don’t seem to be related to his performance. The Nation sports editor Dave Zirin admitted that “many people in the news media and in the football world are really flummoxed why he has not been signed, given the fact that a ton of quarterbacks with resumes far less impressive than Colin Kaepernick's have been signed.” The desired effect is to deter other NFL players from speaking out, which is about as un-American as you can get. Perhaps a contributing factor is that the NFL owners tend to contribute more money to Republican political campaigns and therefore have more of a philosophical interest in not wanting to hear the players’ messages about social injustice.
Americans have a favorite quote to demonstrate their dedication to free speech: “I disapprove of what you say, but I will defend to the death your right to say it.” For this to be more than lip service, NFL superstars must defend  athletes like Colin through boycotts or other means of persuasion. Some players already have joined him, including Eric Reid, Kenny Britt, Robert Quinn, Brandon Marshall, Antoine Betha and Eli Harold. But they add up to less than two dozen out of about 1,700 players. Where is the support from the other players, especially the white players who make up most of the top ten highest-paid players in the league?
Take courage from the University of Missouri football team, who in 2015 showed the rest of the world how to raise their voices in support of others. After a series of racially motivated on-campus events that included racial slurs, a swastika made of feces and other hate crimes, graduate student Jonathan Butler went on a hunger strike in an effort to force the University of Missouri system president to resign. Thirty members of the football team refused to practice until Butler ate. Their coach, Gary Pinkel, supported their decision. Within 72 hours, the university president had resigned, and the team resumed playing.
Now it’s time for the NFL to step up and follow their lead. Remember Benjamin Franklin’s political cartoon of the snake cut into eight parts to represent the colonies, with the caption "Join, or Die"? That’s what we need to do to prevent the headless Quiet Athlete from becoming the NFL players’ logo, with the caption "At least I got mine."