The Leap began in 2015 with the launch of The Leap Manifesto: 15 political demands from a coalition of 60 social movement leaders across Canada. It offered an inspiring, big-picture narrative for an energy transition based in principles of justice, human rights, and worker solidarity.

August 14, 2017 The Leap The Leap
Printer friendly
The Leap Manifesto: A World Based on Caring for the Earth and One Another Published August 14, 2017 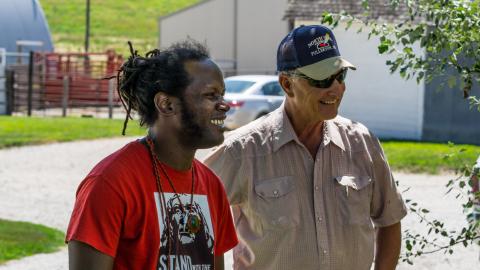 The Leap exists to inject new urgency and bold ideas into confronting the intersecting crises of our time: climate change, racism and inequality. We work through:

Around the world, the manifesto – and the process behind it – is serving as a model for how to build new alliances and powerful momentum around a just transition. In the United States, organizers from the Bernie Sanders campaign are exploring it as a path to engage a generation of supporters with a progressive platform that is not attached to an individual candidate or party. It has inspired the Scandinavian Green Manifesto for Europe, as well as sister Leap initiatives in Australia and the U.K. More than 500 people gathered at a workshop at COP21 in Paris on taking The Leap global. Back in Canada, local Leap groups and networks of workers, teachers, and students for The Leap are springing up as people adapt the manifesto locally and use it to drive intersectional campaigns.

Start by adding your name to the 15 original demands.

And then – if you’re inspired – host a meeting, join an existing group, or start a campaign: the Leap Manifesto is an open-source organizing tool, waiting to be localized by you, in your community.

We start from the premise that we’re facing the deepest crisis in recent memory.

The Truth and Reconciliation Commission has acknowledged shocking details about the violence of Canada’s near past. Deepening poverty and inequality are a scar on the country’s present. And Canada’s record on climate change is a crime against humanity’s future.

These facts are all the more jarring because they depart so dramatically from our stated values: respect for Indigenous rights, internationalism, human rights, diversity, and environmental stewardship.

Canada is not this place today— but it could be.

From students at Historically Black Colleges and Universities who drafted their own manifesto, to farmers in Nebraska who have come together to launch a regenerative revolution in agriculture, to our recent partnership with Los Angeles City Council members on an intersectional, justice-based approach to making L.A. fossil free by 2025, more and more people are showing they’re ready to Leap into the future we want.

Click here if you're ready for a US Leap Manifesto.

Thanks to co-founder Naomi Klein’s summer best seller, No Is Not Enough [2], and her tour last June, we’ve had a surge of energy and momentum to help build the "YES" across North America. My goal is to connect your passion and energy for transformative change with the projects and issues The Leap is tackling in real time.

On that note, have you seen our new platform for sharing stories yet?

Now, here are the headlines as promised: