When it comes to protecting the speech of people who are most vulnerable to being intimidated into silence — like people of color and gay people — conservatives either are suspiciously quiet or drive further intimidation with wildly negative news coverage. 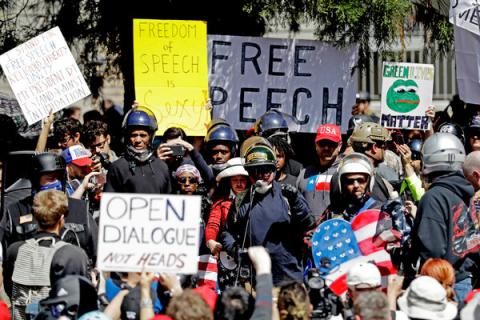 The right-wing media is obsessed with the supposed stifling of “free speech” on college campuses, but it seems to care only about protecting speech it likes. When progressives make provocative statements, conservative pundits react with wounded outrage. This double standard is especially striking in the internet era, as the negative coverage of progressives leads to unbelievable harassment of both professors and students.

Last May, after a video of a commencement address I delivered at Hampshire College circulated on the internet, Fox News created a segment out of the 30 seconds or so in which I called President Trump a “racist, sexist megalomaniac.” The network ran the clip repeatedly over four days with the headline “Princeton professor goes on anti-Potus tirade.”

That a junior faculty member of Princeton was critical of Mr. Trump in a speech at a small liberal arts college should not be surprising. Nor was it newsworthy in any meaningful sense of the term. But it did incite Fox viewers.

Within hours, invective filled my inbox. I received emails that promised I would be lynched, shot and raped, and Princeton’s department of African-American studies, of which I am a member, was so flooded with hate that the locks on the doors had to be changed.

Before all of this, I had been touring colleges to speak about my book “From #BlackLivesMatter to Black Liberation” for a year and a half, without any problems. But after the media onslaught, and a frank conversation with a campus police officer who read through my emails, I canceled a West Coast portion of my tour. I had begun to imagine myself speaking on stage, looking out at a sea of strangers, not knowing if someone might be there to make good on one of the violent and twisted threats I received.

The clip fit perfectly into the Fox News narrative about the dangers of leftist radicalism on campuses. It also perfectly encapsulated the network’s hypocrisy about defending “free speech.”

When it comes to protecting the speech of people who are most vulnerable to being intimidated into silence — like people of color and gay people — conservatives either are suspiciously quiet or drive further intimidation with wildly negative news coverage.

It’s not just the right. Most schools — including Princeton, where I teach — support their besieged professors. But in recent months, other progressive academics have been investigated, disciplined and even fired for comments they made outside of the classroom. This is an ominous turn. The trend has become so visible that earlier this year, the American Association of University Professors implored institutions to take a stand “by resisting calls for the dismissal of faculty members and by condemning their targeted harassment and intimidation.”

Progressives deserve the same speech protection as conservatives. The American Civil Liberties Union and the PEN organization have gone out of their way to defend the rights of provocative speakers like Milo Yiannopoulos and Ann Coulter to speak on campuses, but have been virtually silent on cases involving leftist or progressive faculty members who face suspension for provocative comments. Lisa Durden, an adjunct professor at Essex County College in New Jersey, was fired after she appeared on the Fox News program “Tucker Carlson Tonight” to explain why black people might gather for an all-black celebration of Memorial Day.

Johnny Eric Williams, an associate professor at Trinity College, had to go into hiding after the conservative website Campus Reform blasted his use of racially charged language in critiquing white supremacy. He was besieged with threatening emails and suspended from his position. (Trinity eventually cleared Professor Williams of any wrongdoing.)

Tommy Curry, an associate professor at Texas A&M, faced death threats recently when an old interview he gave about the movie “Django Unchained” was characterized as “racist bilge” by the magazine The American Conservative. Texas A&M distanced itself from Dr. Curry and only later, under pressure, expressed its “unwavering support for academic freedom.”

What is shocking is that while the right-wing media is wringing its hands about suppressive leftists, openly racist and fascist-sympathizing organizations are recruiting young white people on campuses. That conservative pundits have precious little to say when campuses are defiled with swastikas, nooses and racist fliers but cry foul when people like Richard Spencer, Mr. Yiannopoulos and Ms. Coulter are met with protest has become a sick paradox of our time.

In the coming school years, those who are quick to defend the rights of white nationalists and neo-Nazis to speak on campuses must be just as vigilant about protecting the rights of faculty and students to speak out against them — or risk revealing their hypocrisy.