Communist bookstores provided a critical public space for radicals, operating in virtually every major American city. Chicago, Los Angeles, and New York had several apiece. Smaller and ostensibly less radical locales such as Birmingham, Houston, and Omaha, had communist bookstores, too. Some radical bookstores operate today. Venture into one of these shops in which left bookstores helped customers envision radical worlds that were often otherwise unimaginable in America 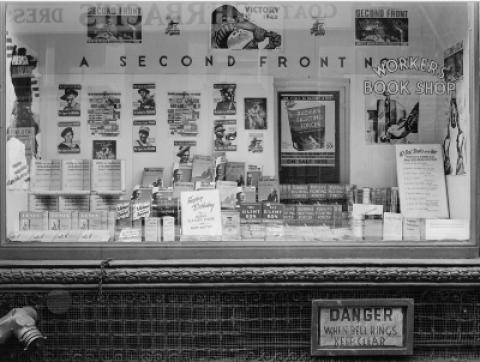 Their names proclaimed a new age: The Modern. The Progressive. The New Era. The New World. Others looked to the past, evoking American political heroes like Thomas Paine and Abraham Lincoln.

They were targets of FBI investigations and congressional hearings on “un-American activities.” J. Edgar Hoover condemned them for selling publications that “indoctrinate . . . members and sympathizers” of the Communist Party and “propagandize the non-communist masses.”

While largely forgotten today, communist bookstores were one of the most important public spaces for Marxism in the United States in the twentieth century. Most Americans didn’t personally know a communist. But in cities across the country, radicals made their presence known at unassuming bookstores. Teeming with texts by Marx, Engels, and Lenin, these stores also stocked the Daily Worker and the latest publications by party officials from the United States, the Soviet Union, and other countries around the world.

Decades before alt-right trolls viciously attacked left-wing writers online, right-wing extremists targeted communist booksellers, accusing them of the most insidious crimes imaginable. “Visit any Communist bookstore in the United States and you will find books printed in Moscow and Peking in English for one, two, and three-year-old babies,” warned Fred Schwarz, author of the 1956 redbaiting bestseller You Can Trust the Communists (To Be Communists). “The Communists want the children. They do not care so much about the adults whom they consider as already contaminated with the disease of Capitalism and consequently of little use to them.”

It’s not entirely clear when communists first sold books in the US. But almost as soon as they split off from the Socialist Party of America to form their own parties in 1919, communists opened their own bookstores, too.

Communist booksellers immediately became targets of state repression as they faced an intense postwar backlash against so-called subversion. In 1919, the New York legislature established a committee to investigate “seditious activities” in the state. As part of the investigation, a group of fifty state police officers and right-wing volunteers led by Deputy Attorney General Samuel Berger raided the People’s House bookshop of the Rand School of Social Science, then New York’s premier radical educational center. The investigators seized communist books and papers, but prosecutors eventually failed to convict the bookstore’s employees of sedition.

As avowed anticapitalists, communists made for unlikely business owners. But as entrepreneurs, their objective was to promote ideology and cover costs, not maximize profits. Red bookstores spread rapidly as the ranks of the consolidated Communist Party of the United States of America (CPUSA) swelled during the Depression. By the end of the 1930s, roughly fifty communist bookstores were open for business. Their politics were also paradoxical. Unwavering supporters of Stalin abroad, American communists were relentless champions of democracy and civil liberties at home. And their bookstores helped them circulate a domestic agenda of racial and social equality.

Communists in the US were sophisticated marketers. International Publishers (IP), the official CPUSA publishing house operated by Alexander Trachtenberg, oversaw an extensive network for distributing communist publications in the US. Trachtenberg, a Ukrainian Jew who had fled Russian pogroms for the United States in 1906, managed IP since it was founded by the party and wealthy socialist A. A. Heller in 1924. The CP paid in advance for texts written by party leaders, typically placing bulk orders in the range of five thousand copies prior to publication but sometimes distributing as many as one hundred thousand. Every party branch across the country had an official “literature agent” that worked with the bookstores and IP to make sure that official texts ended up in the hands of party members (who received a discount of up to 60 percent on publications).

A 1941 advertisement in the Daily Worker suggests the CP’s sales priorities that year. The ad for the Workers Book Shop in New York announced “150,000 volumes to be sold” in “the greatest sale in our history.” In addition to classics like the collected works of Lenin and Marx and Engels’s writings on the American Civil War, the store offered less remembered (and more intimidating) titles like J. B. S. Haldane’s Marxist Philosophy and the Sciences, David Guest’s A Textbook of Dialectical Materialism, and Eugen Varga and Lev Mendelsohn’s New Data for Lenin’s Imperialism for as little as 49 cents apiece.

But business acumen didn’t protect communist booksellers from state repression. One of the most notorious attacks they faced was in Oklahoma City, where local police raided the CP’s Progressive Book Store in August 1940, arresting almost twenty employees and customers and confiscating thousands of books, pamphlets, and newspapers. Four CP booksellers were tried for violating the state’s laws against “criminal syndicalism.” Prosecutors offered confiscated communist texts as evidence of plans for insurrection, and the four defendants were easily convicted.

The Oklahoma case became a lightning rod for radicals and civil libertarians across the country, mirroring national campaigns to free such imprisoned communists as the black labor organizer Angelo Herndon and CPUSA general secretary Earl Browder. In February 1943, more than two years after the raids, the Oklahoma Criminal Court of Appeals finally overturned the booksellers’ convictions.

The FBI was also keenly interested in communist bookstores. The bureau’s files on the managers of the CP’s Free State Bookshop in Baltimore offer a vivid portrait of the ins and outs of running a communist bookstore during the party’s apex in the 1930s and ’40s.

From 1937 to the late 1940s, Alexander Munsell and his wife, Louise Ellen Munsell, operated the Free State in downtown Baltimore next to the local CPUSA chapter’s headquarters. A disheveled eccentric who renounced his bourgeois upbringing, Alexander was an industrial heir who had donated much of his fortune to the CPUSA and joined the Maryland state party’s leadership.

In hundreds of pages of documents, plainclothes FBI agents and informants reported in mundane detail their visits to the Free State Bookshop and another Munsell-operated store, the Frederick Douglass Bookshop, which the bureau described as a “Communist Party literature distribution point in the Negro section of [West] Baltimore.”

For more than a decade, the two stores functioned as the leading public spaces for Baltimore’s CP branch. In addition to offering space for party meetings and “new members classes,” the shops were used to recruit new members, prepare petitions, and organize protest campaigns.

The Free State and the Frederick Douglass dealt with many of the same challenges facing ordinary small businesses. The Munsells applied for business licenses with the city and balanced their books, or at least tried to. Keeping up with bills wasn’t always easy and local CP leaders worried about the store’s deficits. Funds from bookstore sales were badly needed to help cover the local party’s operating costs.

The Daily Worker once suspended shipment of its newspaper to the Free State when it fell too far behind on payments. Alexander Munsell complained to the newspaper that “all of us here in Baltimore who work vigorously to win the war by selling the Worker were puzzled by the fact that the Worker did not arrive,” but a circulation manager informed him the newspaper had no other choice for dealing with delinquent bookstore accounts. It seems that even anticapitalists couldn’t entirely ignore the bottom line.

Literary scholar James Smethurst has shown, for example, how critical communist bookstores were for the mid-century Black Arts Movement. In Birmingham in the 1930s, a young musician by the name of Herman Blount — later known as Sun Ra, the incomparable jazz bandleader — regularly visited the party’s Ella Speed Bookstore, where he enjoyed public lectures and conversations on culture and politics with employees and customers. Decades later in Baltimore, the Black Arts poet Sam Cornish frequented the Free State’s successor, the New Era Bookstore, which published one of Cornish’s earliest poetry collections under its in-house Sacco Publishers imprint (named for Sacco and Vanzetti).

But even as political and artistic communities thrived around these bookstores, they faced a new wave of hardships in the Red Scare following World War II. Congress subpoenaed radical booksellers and publishers to testify and answer questions from elected officials about the details of their business. By the late 1950s, the bookstores’ numbers declined sharply amid plummeting party membership, internal schisms, and nationwide repression.

Those that remained in business often endured attacks at the hands of anonymous assailants. In Baltimore, Los Angeles, and Manhattan, CPUSA bookstores were hit with bricks, Molotov cocktails, and even bombs in the 1960s. Members of the Ku Klux Klan and the John Birch Society were believed to be responsible for many of these assaults.

Despite these challenges, surviving communist bookstores enjoyed a small renaissance in the late 1960s and 1970s. The New Communist Movement — an ultra-left offshoot of the New Left — launched an array of Marxist-Leninist organizations and sought to radicalize existing unions in these years. But in the 1980s and ’90s, two unforeseen transformations overwhelmed this modest uptick in activity.

First, and most dramatically, nearly twenty Communist governments fell in a three-year-stretch. The Soviets had directed American Communists and overseen their bookstores for decades, so the Berlin Wall’s collapse and the implosion of state socialism — despite being a boon for free expression in the Eastern Bloc — had a deleterious effect on communist bookstores in the US.

Second, there was the rise of bookstore chains. As stores like Barnes & Noble and Borders aggressively expanded in the mid-to-late 1990s, they began to sell many of the books that had once been the specialty of more radical independents — not only Marxist booksellers, but also black leftist and feminist bookstores. And as online booksellers like Amazon became household names by the end of the decade, Americans could purchase virtually any book with an ISBN number with a just few clicks of a mouse. Today, many bestselling communist texts are available for free online on sites like Marxists.org.

Some radical brick-and-mortar bookstores still operate today. Few identify strictly as communist, and even fewer are associated with the CPUSA, a party that has struggled in recent decades to reach even ten thousand members. Newer independent radical bookstores such as Red Emma’s in Baltimore and Bluestockings in New York’s East Village draw customers with cafes and frequent speaker events.

Venture into one of these shops and you’ll glimpse the legacy of a bygone era, one in which communist bookstores — despite facing considerable financial and political hardships — helped their customers envision radical worlds that were often otherwise unimaginable in America.

[Joshua Clark Davis is the author of From Head Shops to Whole Foods: The Rise and Fall of Activist Entrepreneurs and an assistant professor of history at the University of Baltimore.]