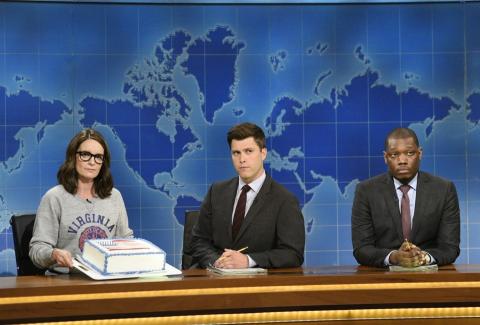 Tina Fey, Colin Jost, Michael Che, and a fated cake on the set of Saturday Night Live's Weekend Update: Summer Edition, Will Heath
In a 2012 article published in the Public Opinion Quarterly, a group of researchers shared the results of a study they had done in the aftermath of the 2008 U.S. presidential election. The researchers, based on panels with young voters, found that the impression of Sarah Palin that Tina Fey had made famous on Saturday Night Live—“I can see Russia from my house!”—had changed the public’s feeling about the actual vice-presidential candidate. Fey’s jokes, the researchers suggested, had proven comedy’s power, especially in times of question and perhaps also in times of crisis, to shape people’s sense of the world. The jokes had woven themselves into the workings of American democracy. The researchers called it the Fey Effect.
On Thursday evening, the woman the effect was named for returned to Saturday Night Live, making a surprise appearance on the show’s Weekend Update: Summer Edition. Wearing a University of Virginia sweatshirt—she had graduated from the school in 1992—Tina Fey talked about the hatred on display in the place she loved, and the violence that had resulted from it. She talked about the American president’s reticence: his baffling but also not entirely baffling reluctance to use his bully pulpit to unequivocally criticize the bigots who had marched on Charlottesville. She did the thing that has been so crucial, and so frustratingly lacking in reflexivity, among those in positions of power: She named the hate groups, and she full-throatedly condemned them.
And then: Tina Fey ate cake. Sheet cake. Cake that worked as a visual metaphor for the sense of helplessness so many Americans are feeling right now, as hate groups feel validated and empowered, and as so many in the U.S. government give those groups ample reason for the feeling. Fey’s cake, destroyed by the end of the segment, was frosted with an American flag.
The bit is, in many ways, classic Fey: It’s self-deprecating, and uses food in particular as a tool of deprecation; it’s at once slapstick and cerebral; it folds a sweeping message about the emotional state of the country into a joke about baked goods; it refers to white supremacists as “chinless turds.” But the bit is classic Fey in another way, too: Its humor is also punctuated with moments of cringe-worthiness—about race, in particular.
At one point Fey makes a joke about a drag queen being “a 6-foot-4 black man.” She yuks to Michael Che about her placement on the set: She’s sitting next to Colin Jost rather than Che, she explains, because the angle highlights “the better half of my face” (“This week, I think it’s important to be clear about that”). She ends the whole bit with an apparently off-handed joke about Thomas Jefferson and ... Sally Hemings, “that hot light-skinned girl over by the butter churn.” (This was an echo of a line in her memoir Bossypants: “To get some play in Charlottesville,” Fey wrote of her time at UVA, “you had to be either a Martha Jefferson or a Sally Hemings.”) All that came in the context of a segment that is in one way channeling a sense of national despair but that is in another toying with complacency as a response to evil’s banality: Let us eat cake.
It’s just a joke, you might say. It’s just a joke, Fey herself might say—as, indeed, she has said so many times before: after episodes of 30 Rock and Unbreakable Kimmy Schmidt met with criticism for their glibness about race, after Fey and her team responded to the criticism by doubling down on the glibness. It’s just a joke, however, doesn’t account for the Fey Effect: for comedy’s power to shape the way people see the world. “Tina Fey starts a grassroots movement with ‘sheetcaking,’” the Twitter Moment about Fey’s appearance summed it up; that, itself, was not serious. There is no “movement” here. The joke is about seeing a problem in the world and turning inward in response. It’s about a kind of political introversion—an introversion that is, as astute critics have pointed out, its own kind of privilege.

The aftermath of Charlottesville has surfaced many truths and sparked many questions about this country and this moment; one of them is the matter of speaking itself. Who should be heard right now, and who should be quieting down? Who has wisdom to share? Who, on the other side, has something to learn?
Fey’s bit, perhaps unintentionally, asked those questions, too. Her appearance, Jost noted when he introduced her, as the studio audience went wild, was “personal”—Fey was speaking up about Charlottesville, Weekend Update suggested, because of her connection to UVA. There are many other people, of course, for whom Charlottesville is “personal” in extremely meaningful ways. But that wasn’t the kind of “personal” Saturday Night Live was exploring this week. It had its own definitions. It gave Fey’s fellow SNL alums, Jimmy Fallon and Seth Meyers, the chance to appear elsewhere in Weekend Update as George Washington and Thomas Jefferson—and to make jokes about the fact that the founders, while doing their founding, had enslaved other humans. Just jokes.
Saturday Night Live is a place, in general, of sanitized centrism: edgy, but not too edgy; summative rather than argumentative. In one way that gives it power as a broad shaper of the national mood: the Fey Effect, in action. In another way, though, its posture limits the show’s capabilities in moments of real moral crisis. It makes it clash against the comedy that more boldly embraces moral arguments and activist impulses. It makes SNL itself a little bit introverted.
Last year, in an episode for his podcast Revisionist History, Malcolm Gladwell criticized Fey’s portrayal of Palin. The gags’ satire was “toothless,” he argued—funny, sure, but also easy and a little cheap. Parody, nothing more. Gladwell’s argument wasn’t terribly convincing—no one watches Saturday Night Live expecting Jonathan Swift—but it was also, perhaps, prescient: The years between 2008 and 2017 have been consequential ones, ones that have changed the character of the country and of the world. Comedy is adjusting to that, as are we all. But it is adjusting slowly. On Thursday, as history’s first rough drafts were still being written about Charlottesville—while it remained an open question whether the hoodless hatred on display there was a death rattle or the new normal—Saturday Night Live welcomed back its former star and, with great fanfare, let her eat cake.
Like ​The Atlantic? Subscribe to ​The Atlantic Daily​, our free weekday email newsletter.
Subscribe to Portside